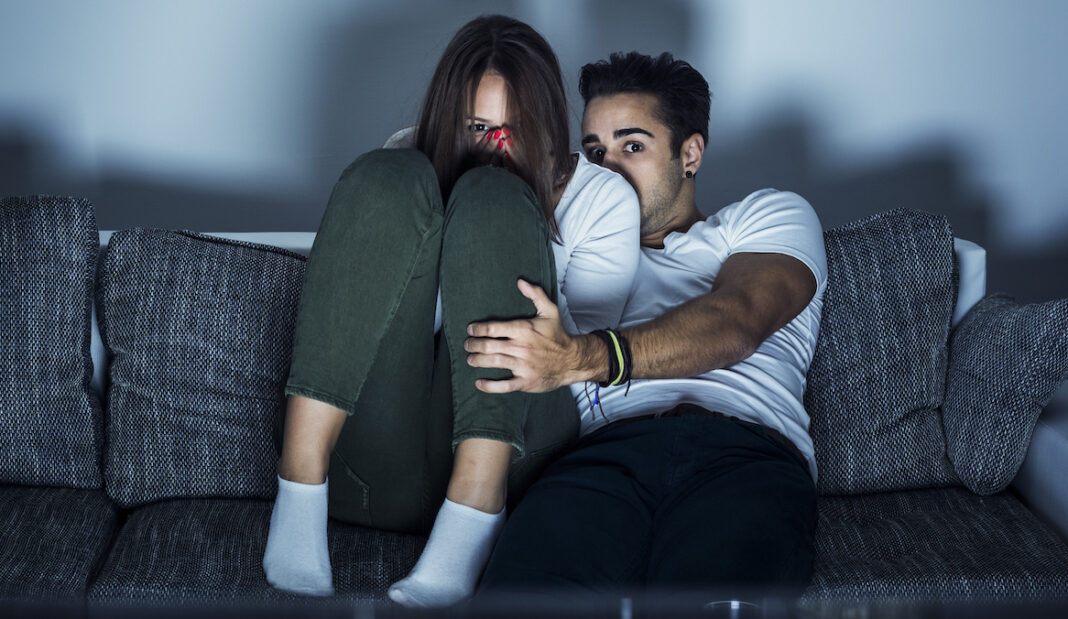 As a self-professed spooky season lover and year-round ghost story enthusiast, you’d think I’d be able to handle all the predictable scary movies with jump scares that run rampant in the entire horror film genre. And yet, my dear reader, you would be wrong. Dead wrong. You’ll often find me watching peak scary scenes through a blanket or clenching my pillow with a fear grip so intense it leaves an indentation that’s still there in the morning. Worse still, particularly disturbing scenes will sometimes stick with me long after the credits close—not to mention keep me awake in the middle of the night. (Poltergeist, Mama, and Bone Tomahawk live rent-free in my head, people).

So, you might wonder why someone might put themselves through all these scary movies with jump scares on a regular basis when you could simply skip the latest Stephen King remake. For me, at least, it has something to do with the excitement of being spooked from the comfort of my couch, which seems to be rooted in science.

According to 2020 research, fictional horror allows you to engage in negative emotions—like fear, disgust, anxiety, and dread—in a controlled and playful way, that doesn’t actually put you in real danger. In fact, one study found that horror fans may actually be more psychologically resilient when it comes to real-world crises, like, say, a global pandemic. These types of movies may even help ease stress and anxiety—rather than exacerbate it—for certain people.

Still, others may find that the heart-thumping, anxiety-inducing jump scares throw their nervous system into overdrive—making the experience far from enjoyable. If that sounds like you, here are some spooky movies to definitely NOT watch (based on my personal experience, but you can go here for a more data-driven list). Plus, a few that don’t employ jump scares, but are nevertheless very scary, and one that won’t hackle your nerves if you still want to get into the Halloween spirit.

I can’t tell you how many times I’ve cozied up on the couch, ready for a lighthearted comedy, when my husband starts playing a movie that I haven’t pre-approved. Usually, my first reaction is, “This better not be a Bone Tomahawk scenario,” which harkens back to the day this exact situation occurred, only to scar the most gruesome, visually disturbing scene into my brain for all eternity (see my note above). Of course, he usually has no idea, since he hasn’t seen whatever film he’s picked out either. That said, if you see any of these titles flash across the screen and jump scares are not your thing, it’s a hard no. Nope. Just absolutely not right out of there.

Before Sam Raimi became an official director of Marvel movies, he was creating the jump-scariest of all horror movies in the 80s with his Evil Dead series. Confession: I actually love the Evil Dead movies, particularly the lead character Ash Williams, played by none other than Bruce Campbell—for reasons of pure nostalgia. The horror is campy, ridiculous, hilarious, and terrifying all at once. It’s the perfect 80s horror movie, with tons of jump scares, creepy voices, and throwback makeup and effects.

If you need more camp from your Evil Dead movies, Evil Dead II basically amps up the ridiculous factor with more silliness, more gore, more jump scares, and more Deadites (you’ll have to watch to get the reference). It’s basically a remake that solidifies Ash Williams as a hero in the horror genre.

3. The Haunting In Connecticut

Some data-driven horror fans have done the hard work and counted every single jump scare in this movie, for a total of 26. That equals a jumpscare about every 4 minutes if you’re doing the math. While this one didn’t get great reviews, it’s high on the list when it comes to scare-your-pants-off tactics. Watch at your own peril.

Another Sam Raimi movie, this one follows the downward trajectory of a young woman who finds herself cursed. It relies on scare tactics and gross-out visuals, which are not for the faint of heart. Avoid at all costs.

If you’ve ever had the pleasure of watching Tim Curry embody an evil clown from outer space, you know just how unsettling It can be. In the hands of Bill Skarsgard, we get a slightly different, but no less scary, version of this spike-toothed demon in old-timey circus clothes. The scares are, well, scary, with most of the unsettling moments coming from the disjointed body movements and unhinged jaw scenes that will make you want to hit pause and never come back.

Another one that’s chockful of cheap scares is this demon-forward horror flick. There is one particular scene that caught me so off guard, I actually screamed. Out loud. In a movie theater.

In the early aughts, the scariest thing directors could think of was women with dark, stringy hair, dangling in their faces—just waiting to get you. Well, it worked, because The Grudge is one of the most creepy and captivating horror movies out there—complete with 19 jump scares, according to the internet.

There is something about this movie that still haunts me. Jump-scare-wise, it’s not the most frightening (a quick internet search shows that it taps out at 13), but the spookiness, visuals, and oppressive feeling of dread that pervades this movie earns it a spot on this list. As the story unfolds, you might even start to feel a little sorry for the specter—which leads to a complicated mash-up of terrifying empathy.

Scary movies without traditional jump scares, but are terrifying in other, possibly worse, ways

It’s a hard pass on scary movies with jump scares, but what about horror flicks that rely on creating a mood with crackling intensity, where you’re not exactly sure what’s going to happen next? Those are absolutely my favorite, so here are a few to either queue up or file under “definitely not” depending on where your interest falls.

Some movies are meant to be scary. Others are meant to be thought-provoking. This one is both. While it doesn’t have jump scares, it creates a tense, sorrowful, and terrifying atmosphere, that runs parallel to grief. It’ll leave you debating the real ending—and meaning—of the movie for hours.

Again, no cheap thrills to be seen, but horrific, unexpected plot twists? This one has those down to a T. It’s a bit of a slow burn, but the end sequence will leave your mouth agape as you try to comprehend what just happened, wondering if your mind is playing tricks on you. It’s not.

Wow, this is one for the ages. Anya Taylor Joy is incredible, as is the entire cast, really. The attention to detail, the accents, and the commitment to colonial English really make this movie. Not to mention I held my breath in abject terror for the entire hour and 32 minutes the first time I watched it. Shoutout to the crow for the most surprising scene in a movie ever.

I rarely see this movie on any best of horror lists, and I often wonder why. It’s spooky and moody, and comes with a cool, if predictable, twist at the end. If true ghost stories haunt you, this one will stick with you for a while.

No scary movie list is complete without a mention of The Shining—a Stanley Kubrick adaption of Stephen King’s story about a haunted hotel that possesses a winter caretaker. This one doesn’t come with jump scares, but that won’t save you from absolutely spine-chilling scenes. It’s the reason I can’t look down a hotel hallway without dread swelling up in my throat.

If you’ve made it to the end of this list without cowering in fear, congratulations! Your prize is a non-scary, scary movie recommendation to light up your Halloween watchlist. The one that I like to come back to after hitting my scary threshold for the season is none other than Ghostbusters. Because not many things can take the edge off like a giant marshmallow attacking New York City.

Our 6 Favorite Onesies For Every Body