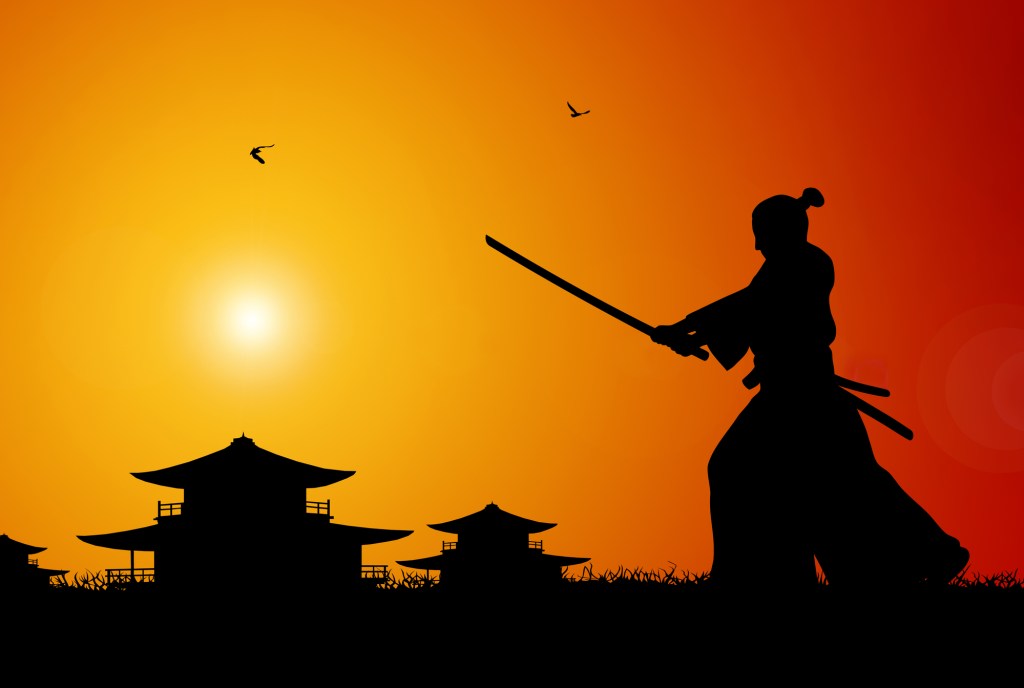 Or are you beating yourself up for not sticking to your New Year’s resolutions?

I mean, why do we beat ourselves up when we already know it won’t help?

Why do so many of us struggle with self-compassion?

Is there another option?

In the 2003 movie, “The Last Samurai”, there is a scene where Algren (Tom Cruise) is defeated in a sword sparring match by a samurai named Ujio (Hiroyuki Sanada).

Another samurai, Nobutada, says in broken English that Algren’s problem is: “Too many mind.”

“Too many mind?” Algren asks.

Nobutada was actually talking about the Zen concept of No Mind (Wuxin, 無心).

We shoot for the same thing in our qigong practice. We aim for a Zen state where we don’t have Too Many Mind. For example, the qigong technique called Entering Zen helps us to relax the body, let go of worries, and empty the mind.

For example, if you already broke your New Year’s resolution for 2022, acknowledge that you have Too Many Mind.

Maybe your resolution was to work out 5 times per week in 2022. That’s a noble goal, and part of you certainly wants to do it. But another part of you — one of your many minds — does NOT want to work out.

Part of you probably equates working with shame or failure.

And so that part of you rebels. Like a teenager, these rebellious parts can be incredibly strong willed.

Modern, integrative approaches to psychotherapy recognize that we have several sub-personalities. Even 100 years ago, Freud talked about three sub-personalities: the Ego, the Id, and the Superego. So this idea is not new.

If we look through this lens of multiplicity, then it’s not YOU who broke your New Year’s resolution, but rather one PART of you. It was a sub-personality.

One of your parts is dead-set against working out (or quitting drinking, or whatever), and this part is causing problems for other parts of you.

Many of my students have told me that they found a home in qigong.

Whereas they struggled to make a daily habit with other arts, they finally succeeded with qigong.

Qigong is a ritual of self-compassion. When we practice qigong, we accept and embrace all of our various parts.

We bring our many minds into one big group hug, even if just for a moment.

Last week, I sent you some tips for being kinder to yourself. Here they are if you missed them:

These tips are not just about self-compassion, but also about unifying your many minds.

When you unify your many minds like this, you bring yourself closer to the Zen state of Wuxin, or No Mind.

Pick one of the tips above and really try to implement it for the rest of the week.

It’s time for a group hug! Bring those many minds together! Best regards, Sifu Anthony

I’m Anthony Korahais, and I used qigong (pronounced “chee gung”) to heal from clinical depression, low back pain, anxiety, and chronic fatigue. Today, I’m the director of Flowing Zen, an international organization with students in 48 counties. I’ve been teaching qigong since 2005, I’ve served on the board for the National Qigong Association, and I’ve helped thousands of people to use qigong for their own stubborn health challenges. If you’re ready to get started with qigong, there’s no better way than my best selling book, which comes with free videos and meditations. The sooner you read my book, the sooner you can start healing! Click here to see my book on Amazon.

Find Your Silly Self – Faulk TaiChi