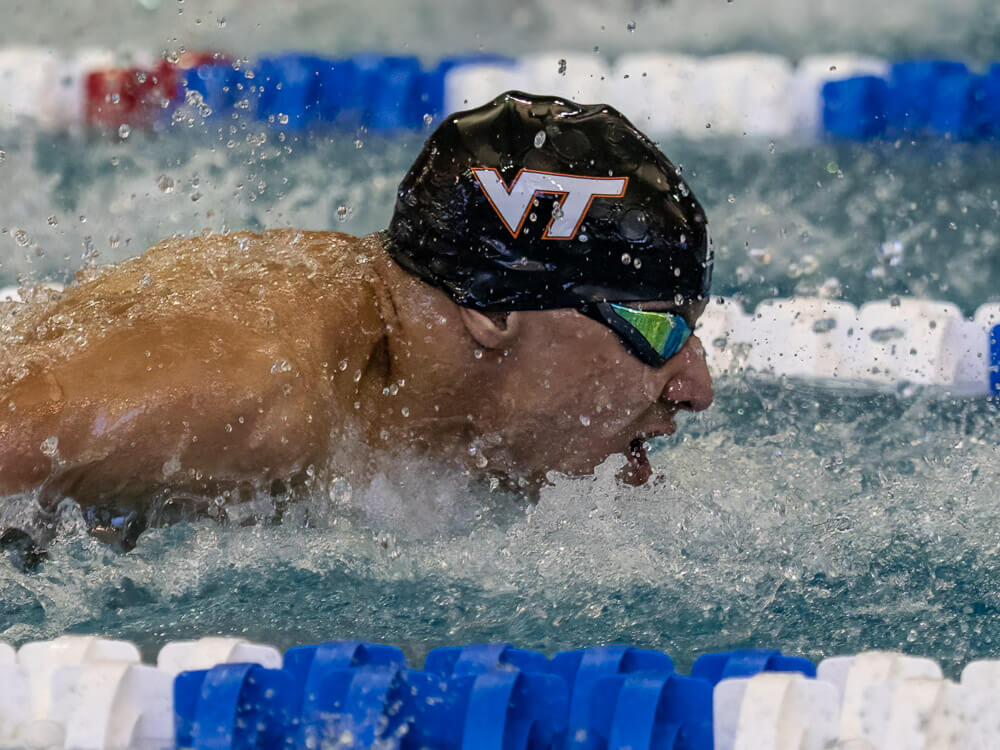 ACC MEN’S SWIMMER OF THE WEEK
Youssef Ramadan, Virginia Tech, Jr., Cairo Egypt
Ramadan set a pool record in the 100 fly on his way to helping No. 18 Virginia Tech defeat No. 8 Virginia in Charlottesville. The Hokies went 1-2 in the 100 fly, with Ramadan finishing first in 45.43. He also set up a podium sweep in the 100 free with a time of 43.15. The Cairo, Egypt native helped seal the win for Virginia Tech as part of the 400 free relay squad who claimed first with a time of 2:52.97, swimming a 42.66 split. The junior recorded two B zone qualifying times.

ACC WOMEN’S SWIMMER OF THE WEEK
Kennedy Noble, NC State, Fr., Goodyear, Arizona
Noble led two Wolfpack podium sweeps in the 100 and 200 backstroke, as No. 4 NC State ended No. 21 Duke’s 4-0 winning streak. Her 100 back first place time of 52.96 sits eighth fastest in the ACC and her 1:56.36 in the 200 back is 11th fastest in the country and second in the ACC. Noble tallied two NCAA B zone qualifying times in both the 100 and 200 back. The freshman swam the backstroke leg of the 200 medley relay that claimed the top spot over Duke by a second and a half. Noble was one of three women to win both of their individual events.

ACC MEN’S CO-DIVERS OF THE WEEK
Daniel Knapp, Notre Dame, Fr., Mesa, Arizona
Knapp took first place in both diving events in No. 23 Notre Dame’s meet against (RV) Princeton and Navy to mark his first career sweep. The Mesa, Arizona, native scored a 330.75 in the 1-meter and a 408.00 in the 3-meter. Both scores qualify as NCAA zone marks.

Dylan Reed, Pitt, Sr., McLean, Virginia
Reed helped Pitt to a win over West Virginia during the Panthers’ senior meet, as he swept both the 1-meter and 3-meter diving events and two NCAA zone qualifying scores. The senior’s score of 402.70 led a 1-2-3- finish for the Panthers in the 3-meter. He recorded a 348.20 first-place finish in the 1-meter.

ACC WOMEN’S DIVER OF THE WEEK
Jen Bell, Virginia, Sr., Pelham, New York
Bell swept the 1-meter and 3-meter dives in No. 1 Virginia’s meet against Virginia Tech. Her 1-meter score of 326.63 is the second best score in UVA history and her 3-meter score of 334.28 sits as the fourth best score in UVA history. Both dives earned NCAA zone qualifying scores.

— The above press release was posted by Swimming World in conjunction with the ACC. For press releases and advertising inquiries please contact Advertising@SwimmingWorld.com.

15 Bible Verses on Self Control