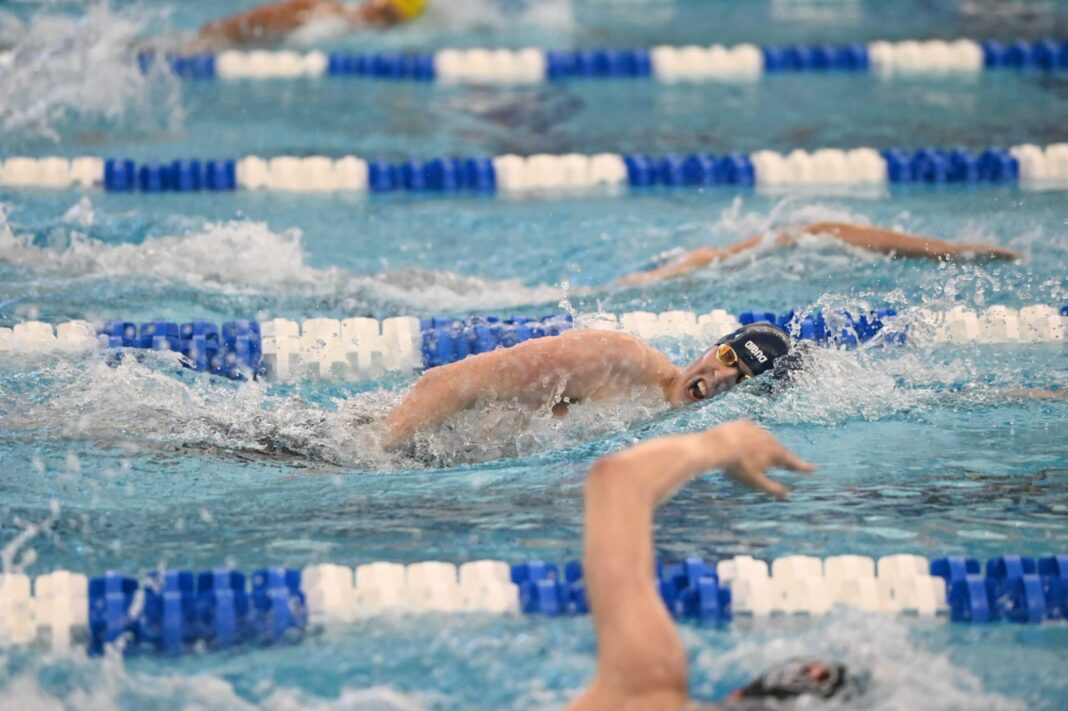 After what had been a nightmarish year, Jack Hoagland saw a glimmer of hope yet had to will himself to turn away from it.

The 2021 ACC Championships Men’s Swimmer of the Meet did not have the junior year at Notre Dame he wanted, to say the least. He contracted COVID-19 soon after arriving on campus in the fall. Then in October, he fell off his scooter, breaking the scaphoid bone in his left hand in what turned into a 12-week rehab. Add in a second COVID bout after the team’s December training trip and upheaval in the program as coach Mike Litzinger retired from coaching abruptly just as the season was about to start, and Hoagland was left processing a lot of emotions.

By the early winter, he came to the difficult decision that fate was telling him to redshirt the 2021-22 season. Instead of scraping what he could out of the postseason of a disastrous year, discretion would have to be the better part of valor. Take the redshirt, he’d decided, and relish a do-over, which with his extra year from the COVID-19 cancellation would allow him eligibility past Olympic Trials in 2024, hopefully by then with this master’s degree in business administration.

But as sure as he was in that path, it could’ve all changed in the practice before the Fightin’ Irish departed for ACCs. Just to see where he was at, he rested for a few days, threw on a fastsuit and threw down a 1,650 and 500 free for time.

The result in the latter, a 4:12 that was in line with his personal- best, shocked him. It also made him think long and hard about whether to keep a potentially ACC-winning time at home.

“Given everything that happened with the coaching staff, thinking about, well what if something else happens, there’s all these uncertainties about my future,” Hoagland told Swimming World. “It was definitely a difficult decision to make. Looking back at it now, it was the right decision, because it allows me to grow into all the potential I have.”

With the past behind him and a first chance to race in earnest since 2021 Olympic Trials under his belt last month, Hoagland hopes his patience will pay off.

Jack Hoagland initially didn’t think anything of the scooter incident in early October. It wasn’t all that graceful, the junior from Albuquerque, New Mexico, admits, front-flipping over his handlebars. Using his arms to brace the rapid deceleration of his 6-6 frame came at a physical cost, which he didn’t fully realize for several days, as the pain kept up and the swelling wouldn’t go down.

The diagnosis was a fractured scaphoid, the semicircular bone that connects that radius of the arm to the other carpal bones in the wrist. Hoagland had options on healing. Fearing impaired mobility long-term, he opted for the longer rehab, setting the bone and letting it heal naturally instead of surgically inserted pins. That elongated the rehab, but it set the precedent of putting aside immediate gains for a long-term payoff.

It took a couple of weeks for the pain to come down before he got back in the water, and he spent the balance of the 2021 fall semester reduced to kicking, his hand in a waterproof cast. He worried that he’d have to make major stroke adjustments – as a right-side breather, he leans heavily on his left side for leverage. Even more concerning was that the distance swimmer would lose his feel for the water, so integral yet so ephemeral.

But once the cast came off and the natural stiffness of inaction wore off, he was pleasantly surprised to find his worst fears unfounded.

“Immediately when I got back in the water, it was stiff around the hand just from no movement for weeks on end,” he said. “But just a couple of weeks later, when the movement was back, it was like nothing had ever happened, which was super amazing. … When I got back to the water and got that feel back, I was like, wow, there’s no difference at all.”

Fightin’ Along, Out of the Water

Even if Jack Hoagland had maintained a 100 percent scooter safety record, 2021-22 would’ve been arduous for Notre Dame. They went through a midseason adjustment when Litzinger abruptly retired from coaching and his top assistant resigned, under the cloud of pending litigation. An interim regime gave way to the hiring of Chris Lindauer in the spring.

Hoagland felt a duty to help teammates navigate those rough waters. He had burst onto the scene as a freshman with three top-three finishes at the ACC Championships. He was second in both the 400 individual medley and 1,650 free and third in the 500 free. He would’ve been a contender for finals at NCAAs had the COVID-19 pandemic not intervened.

That early promise blossomed as a sophomore. Named Most Valuable Swimmer of the ACC Championships, he won all three of his individual events. He garnered All-America recognition at NCAAs, finishing fifth in the 1,650, 10th in the 500 and 11th in the 400 IM. He turned that into a respectable showing at Olympic Trials that summer, finishing in the top 21 of his three individual events, peaking at 17th in the 1,500 free. That kind of impact, as an upperclassmen leader out of the pool and a star performer in it, wasn’t easily replaced in South Bend. So Hoagland worked hard to make sure he still contributed to the part of it that his body allowed.

“I knew I had to step up for the team and take some kind of leadership role,” he said. “Just because I wasn’t swimming at the time and wasn’t in the water with them, it didn’t mean I couldn’t help lead them. So I really wanted to embrace that role as much as I could, and while I wasn’t swimming at practice, I was helping coach them at the same time, which allowed me to create that bond with the new guys that were coming up and strengthen the bonds with the others, giving my advice and my two cents about everything.

“Seeing them in meets made it hard because I wanted to get in there, I wanted to prove to myself that I could get back to this and I could make my times again. And that made it difficult to see my teammates do extremely well and know that I couldn’t do anything to help them get faster in the sense of racing.”

With nearly 18 months between significant meets dating to Olympic Trials, Hoagland has been content to quietly build behind the scenes. His first dual meet, against Penn State and Pitt last month, provided a salient progress report: Wins in the 500 free, 1,000 free and 400 IM, plus a 44.65 anchor leg in the 400 free relay.

The times are reflective of the early juncture in the season, and Hoagland is still trying to dial his race preparation back in.

“I was nervous, but when I got into the water, I could tell that wasn’t really racing strategy ready, it was just more feeling out what a 500 race feels like,” he said. “So I was super grateful to experience that again and get back into the mindset of, it’s not just about winning right now or trying to do a best time, I need to make sure I’m doing my race strategy right for future meets.”

Hoagland remains steadfast in the decision to hold out for a full season instead of the partial one last year would’ve given him. He called his successful time trial last year “both inspiration and a wall.” He can see where he’s trying to go, but it will take time to get there.

If Hoagland has improved in any dimension over the last year, it’s certainly in the area of patience.

“At practice every single day, pushing my teammates is one thing,” he said. “But I’m pushing myself at the same time to know that, OK I know I can go this time after my injury.”