When a Tie Was Not a Tie; How .002 Decided Olympic Gold 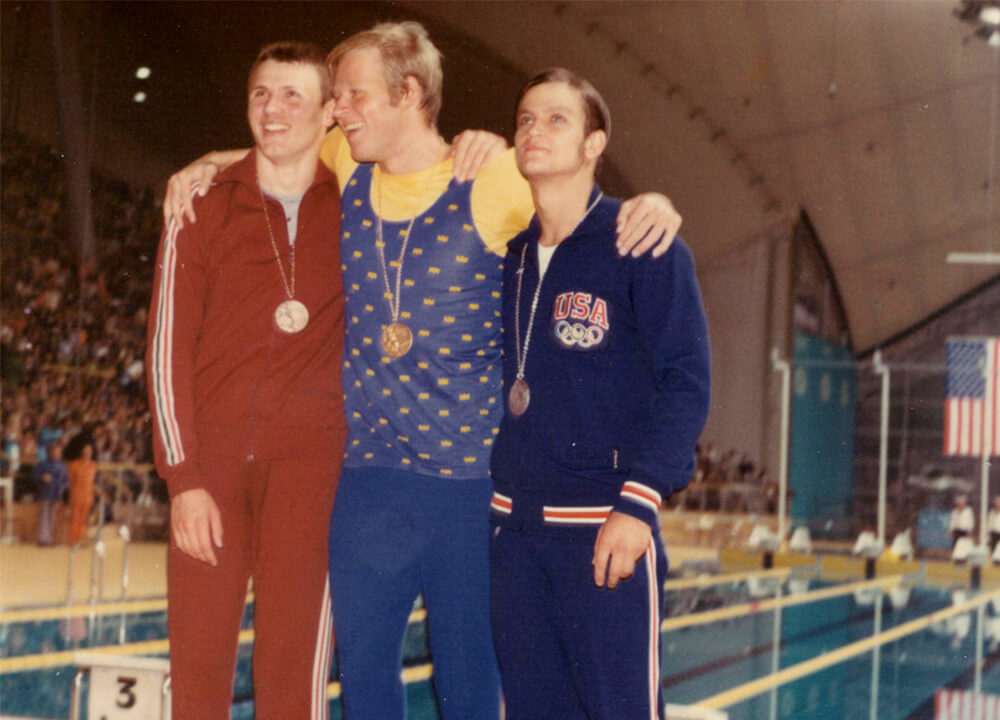 When a Tie Was Not a Tie; How .002 Decided Olympic Gold and Changed the Sport

On Aug. 30, 1972, Sweden’s Gunnar Larsson and the United States’ Tim McKee touched the wall in identical times of 4:31.98 in the 400-meter individual medley at the Olympic Games in Munich. However, the rules of the day required the race to be taken out to the thousandth of a second, and it was Larsson who was awarded the gold medal, with McKee earning silver. Ultimately, .002 separated the men, a time difference that changed the sport.

The guy in Lane Four charged to the finish, looked to the scoreboard and saw what he wanted. He was an Olympic champion, the “1” next to his name confirming the achievement.

The man in Lane Seven surged for the wall, looked to the scoreboard and saw the outcome he desired. He was an Olympic champion, the “1” next to his name confirming the achievement.

Gunnar Larsson and Tim McKee arrived at the 1972 Olympic Games in Munich in search of gold, and for a moment at the conclusion of the 400-meter individual medley, they both believed their quest was fulfilled. But when the medals were presented inside the Schwimmhalle, only Larsson wore the metal of the most-cherished medal.

There have only been three gold-medal ties in the history of Olympic swimming, and all occurred in sprint-freestyle events. In 1984, Americans Nancy Hogshead and Carrie Steinseifer shared the title in the 100 freestyle at the Los Angeles Games. Sixteen years later, the United States’ Gary Hall Jr. and Anthony Ervin each earned gold in the 50 freestyle at the Sydney Games. At the most recent Olympics in Rio de Janeiro, American Simone Manuel and Canadian Penny Oleksiak posted identical times in the 100 freestyle.

The fact those six athletes, and not three, were honored as Olympic champions is the direct result of what unfolded in 1972, when Larsson and McKee were inseparable to the human eye and to the hundredth of a second, but not to the timing system in use during the era.

There was no shortage of storylines in Munich, where Mark Spitz corralled seven gold medals and as many world records, and where Australian 15-year-old Shane Gould won five individual medals. So, Larsson and McKee were just doing their part by producing the tightest race – at least to date – in Olympic history.

Despite their personal designs on Olympic gold, neither Larsson nor McKee was the favorite heading into the final of the 400 individual medley. That status went to McKee’s American teammate, Gary Hall, who blasted a world record of 4:30.81 at the United States Olympic Trials in Chicago. It was the fourth time Hall broke the world record since 1969, and it would take a major upset to keep him off the top of the podium.

Known for his skill in the butterfly and backstroke events, it was not surprising that Hall attacked the front half of the final, which consisted of those two strokes. The aggression displayed by Hall was stunning, as he built a massive advantage during the opening 200 meters. With a weak breaststroke leg, Hall knew he needed separation, but there was also a need to have enough energy for the back half of the race. Would Hall hit a wall?

“Hall went out very fast in the first two legs and was eight seconds ahead (of me) at the 200,” Larsson said. “I had told my dad before the Olympics that if I was six seconds behind or less (at the midway point), I was going to beat him. But six seconds in the last 200 meters is a lot. He went out too hard and died.”

As the competitors shifted into the breaststroke leg, Hall started to show signs of fatigue, and coupled with his struggles in the stroke, McKee was in front of his countryman by the 275-meter mark. Meanwhile, Larsson narrowed his deficit significantly. The question for the Swede, though, was whether he could reel in McKee over the final two laps.

One of several international swimmers on the Long Beach State University roster of coach Don Gambril, Larsson was a well-known force to members of Team USA. And as a former world-record holder and European champion in the 400 freestyle, Larsson was fully expected to make a push down the stretch. But would he have enough room to catch McKee?

With every stroke, Larsson cut into his deficit and took what was a no-doubt-about-it victory for one of the Americans and made the outcome disputable. At one point, McKee snuck a peek across the pool and saw he had a sizable edge. But when the swimmers approached the wall, there was no separating them, and confusion reigned.

“That whole last leg, I knew I had it won,” McKee said. “Then when I touched and saw Larsson, I didn’t think I’d won. When I saw a one next to my name on the scoreboard, I thought I’d won again, but 15 seconds later, I saw the one next to his name. Then I didn’t know what was going on.”

At the finish, the scoreboard showed Larsson and McKee as co-champions, thanks to matching times of 4:31.98, with Hungarian Andras Hargitay earning the bronze medal. American Steve Furniss was fourth, with Hall in fifth and almost seven seconds slower than his world-record time at Trials.

As officials scrambled, Larsson and McKee sat on the deck and waited for six or seven minutes for a decision. Would they share the gold, as the scoreboard suggested? Would there be a swimoff, which would have been a brutal expectation given the grinding nature of the 400 individual medley? Heck, Larsson even suggested to McKee the idea of a gold-silver hybrid medal.

None of those scenarios was an option. Instead, officials revealed that the timing system – although not displayed on the scoreboard – tracked the swimmers to the thousandth of a second, and Larsson was declared the winner. The Swedish standout’s official time was noted as 4:31.981 to the 4:31.983 of McKee.

“With 20 meters to go, I looked around and that messed up my stroke for two or three turns,” McKee said. “Normally, that wouldn’t matter, but I know it cost me two-thousandths of a second. There has to be a winner and a loser, even if it’s two-millionths.”

When a race is won in that fashion, it is easy to dissect every minute detail of the event. Were there any turns that could have been better? How was the finish? Could more energy have been spent or reserved on an earlier stroke?

For Larsson, there was never any doubt he won. Well, his reaction said as much. After touching the wall and looking at the results, Larsson celebrated the “1” next to his name, only to be told by fellow Swede Bengt Gingsjo that he wasn’t the only athlete shown to have prevailed. It took nearly 10 minutes for the result to be confirmed, and for Larsson to breathe a sigh of relief.

A few days later, Larsson and McKee engaged in another duel, this time in the 200 individual medley. Unlike the longer distance, Larsson won the rematch behind a world record, with McKee picking up his second silver medal. McKee’s career was defined by silver linings. Four years after finishing behind Larsson on two occasions, McKee was again the Olympic silver medalist in the 400 individual medley, beaten at the 1976 Games by American Rod Strachan.

The precedent set by the duel between Larsson and McKee resulted in officials deciding that any future ties would not be taken out to the thousandth of a second. Obviously, that decision provided no solace for McKee, who saw the rule book of FINA, the sport’s governing body, altered to read as part of Section SW 11.2: “When automatic equipment is used, the results shall be recorded only to 1/100 of a second. When timing to 1/1000 of a second is available, the third digit shall not be recorded or used to determine time or placement. In the event of equal times, all swimmers who have recorded the same time at 1/100 of a second shall be accorded the same placing. Times displayed on the electronic scoreboard should show only to 1/100 of a second.”

The change to the rules led to the subsequent sharing of gold medals in 1984, 2000 and 2016. Really, Larsson and McKee – although unaware of their future impact – changed the landscape for Hogshead, Steinseifer, Hall Jr., Ervin, Manuel and Oleksiak. If not for their epic showdown, perhaps ties would not have been allowed.

While Larsson was inducted into the International Swimming Hall of Fame in 1979, McKee did not receive his due recognition until 1998. If not for .002, McKee undoubtedly would have received enshrinement much earlier. Asked about the impact of that finish on his life, McKee once had a simple answer. The reply, too, placed perspective on the moment.

Larsson is regarded as one of the two greatest male swimmers in Swedish history, the other being distance legend Arne Borg. Despite the passage of time, Larsson remembers that night in Munich vividly.

“Going into the last 50, Tim was way ahead of me, three or four meters ahead,” Larsson said. “I watch the video and every time, I don’t think I am going to catch him. Every time, it is a new experience where I say, ‘I won this time, also.’”

Simple Apple Cake From A Cookbook Dedicated To Venice Italy

7 Amazing Rooftops in Sydney That You Can Rent on Peerspace