What Barriers Could Be Broken? 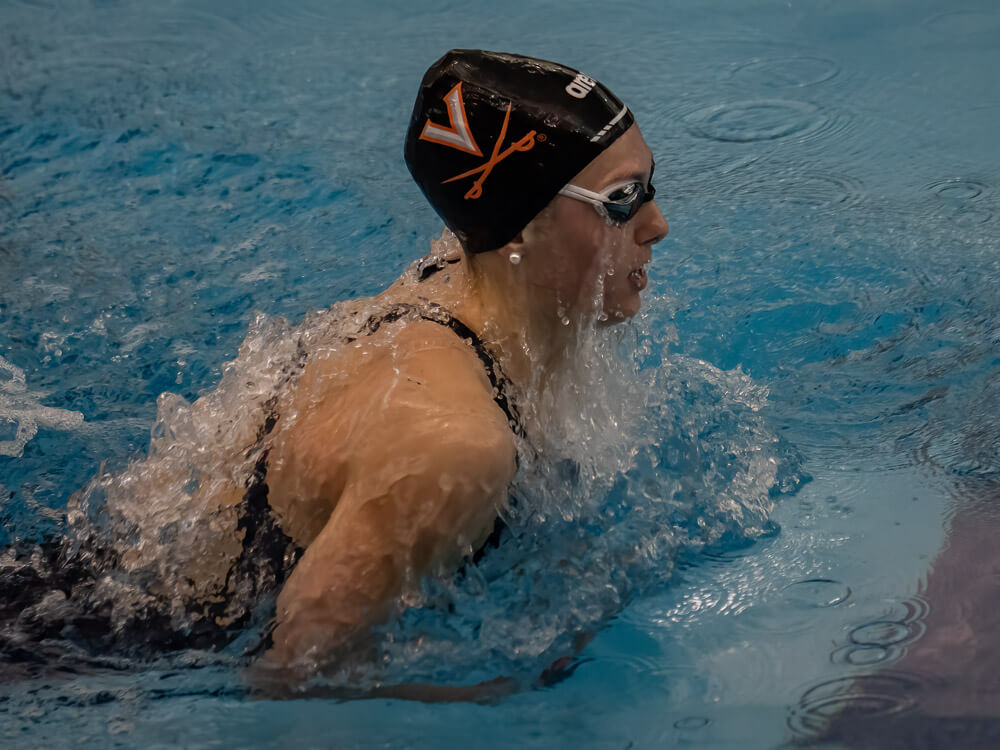 College Swimming Record Chase: What Barriers Could Be Broken in 2023?

After pulling away from Torri Huske and hitting the wall first for her second consecutive NCAA title in the 200-yard IM, Alex Walsh looked genuinely shocked — not necessarily because of her victory but because she had recorded the fastest time in history, her mark of 1:50.08 knocking six tenths off the four-year-old standard set by Ella Eastin. This win was the first major triumph of the year for Walsh, who would add individual NCAA titles in the 400 IM and 200 butterfly before asserting herself as the world’s dominant performer in the 200-meter IM with her first world title in June.

Now, with another college season underway, can the Virginia third-year swimmer drop another nine hundredths and slide under the 1:50-barrier? Walsh had a chance in 2022 as she was more than a second under American-record pace at the 150-yard mark, but she ended up a tick short. The event has been relatively stagnant over the last several years.

In 2012, Caitlin Leverenz and Katinka Hosszu became the first swimmers under 1:52, and then Eastin broke the mark twice during her college career while competitors such as Kathleen Baker and Beata Nelson followed closely behind Eastin. But it seems like the first-ever 1:49 has been a matter of time for many years, and given Walsh’s rate of steady improvement, she has a real chance to accomplish that in 2023.

The 200 IM marks the best chance of a major record barrier being surpassed this year, but what other lauded records might come under fire this year?

This one may seem like a stretch given that Hugo Gonzalez set the NCAA and U.S. Open records of 3:32.88 just last season, but consider that at the start of 2022, only one man had ever broken 3:35. Now, there are four men under 3:34, and three of those men are returning to college competition this year. Cal’s Gonzalez revealed this week that he will return to the Golden Bears in the spring, while Arizona State’s Leon Marchand was the world champion in the 400-meter IM this summer and Texas’ Carson Foster claimed a very impressive silver medal in that race.

Last weekend at the NC State Invitational, Marchand swam a mark of 3:33.65 for the third-fastest performance in history, and he has made enormous improvements in just over a year training with coach Bob Bowman in Tempe, Ariz., while Foster, who went 3:33 in prelims at the NCAA Championships last season, showed at Worlds that he is capable of delivering to his full potential in the final. These two can certainly get below Gonzalez’s existing record, and perhaps Gonzalez can as well given his recent track record.

Amid a relatively quiet weekend for the University of Virginia women at the Tennessee Invitational, Kate Douglass went off on the final day as she lowered her own American, NCAA and U.S. Open records in the 200 breast, her mark of 2:01.87 cutting three tenths from her previous top mark. Douglass has now recorded a time more than seven tenths faster than Lilly King at her peak.

With no one else in the nation capable of that level of 200 breaststroke speed, Douglass would undoubtedly be in position to defend her NCAA title by merely repeating her record or even swimming a little slower, but is a run at 2:00 possible? To finish the race that fast, Douglass would probably need to split under 27.5 on the first 50 and then hold 30-mid splits (compared to the 31.4 and 31.6 splits in which she finished the record-setting swim). So yes, it’s a reach, but it’s on the radar.

In this one, 18 is not technically a barrier anymore because one swimmer has beaten the mark. Back at the 2018 NCAA Championships, Caeleb Dressel went 17.81 on a relay leadoff and then 17.63 in the individual 50 free. But no one else has ever joined him in that scintillating territory, with next-best men sitting at 18.27, including Bjorn Seeliger at last season’s NCAA Championships and Jordan Crooks at last week’s Tennessee Invitational. But the preponderance of men gaining speed and being at least capable of 18-low brings this into possibility.

The contenders are plentiful: Seeliger, Crooks, defending champion Brooks Curry, the Virginia duo of Matt Brownstead and Matt King and college swimming newcomer Josh Liendo, already a World Championships medalist and Commonwealth Games champion when he arrived at the University of Florida. If one of these men hits every aspect of the race perfectly, 17 is in play.

And if not from a flat start, certainly a 17-second relay split could happen. That feat has been accomplished on 11 different occasions, and Dressel was responsible for 10, all except Vladimir Morozov’s 17.86 from the 2013 championships. Smart money suggests that the list of 17-second splits will grow this year. The 49-second barrier has been eclipsed once each in the 100 fly and 100 back, but the floodgates could open in 2023. Maggie Mac Neil became the first woman ever under 49 at the 2021 NCAA Championships, four months before she would claim Olympic gold in the meters version of the event. In 2022, a blanket finish saw Kate Douglass get to the wall in an American-record time of 49.04 with Torri Huske and Mac Neil both just behind her.

This year, all three of those swimmers have all looked strong with 49-second swims, with Huske leading the way at 49.25, and both Gretchen Walsh and Claire Curzan have also visited 49. It seems clear that it will take a 48 to win the national title this year, and two or three (or more) swimmers could reach that level.

As for the 100 back, Katharine Berkoff smashed through 49 seconds with her 48.74 last year while the younger Walsh also broke the previous record with her time of 49.00. That duo along with Curzan and possibly Mac Neil are candidates for 48s this year.

Only a single NCAA record survives from the polyurethane suit era of 2009, and that is the 200 free relay mark of 1:14.08 established by Auburn’s team of Jak0b Andkjaer, Gideon Louw, Kohlton Norys and Matt Targett. That record has survived an onslaught of challenges, including last season when Florida’s team of Adam Chaney, Eric Friese, Kieran Smith and Will Davis clocked 1:14.11 to just miss the mark, while Cal, Texas, NC State, Virginia and Arizona State were all under 1:15.

Could this be the season when a team finally breaks the record? Florida absolutely has a chance with Chaney and Friese returning and Liendo entering the mix while Macguire McDuff and Julian Smith are both capable of contributing the decisive leg. Cal will return Bjorn Seeliger, Jack Alexy and Destin Lasco from last year’s national runnerup relay, so the Golden Bears could take a shot at the mark as well.

And if the record does go down, perhaps meet organizers can recruit Louw to recognize the new standard-bearers. He will be on deck regardless as an assistant coach for Auburn, where he is in his fifth season.

Florida also won a national title in the 200 medley relay last season with Chaney, Dillon Hillis, Friese and Davis combining for a time of 1:21.13. Could the Gators get under 1:21 this year with Liendo entering the mix? Or maybe a Cal team with Seeliger returning to the backstroke leg after splitting 20.08 at last year’s national meet for the fastest time in history?

I Stayed at Le Carl Gustaf and Never Felt So Refreshed