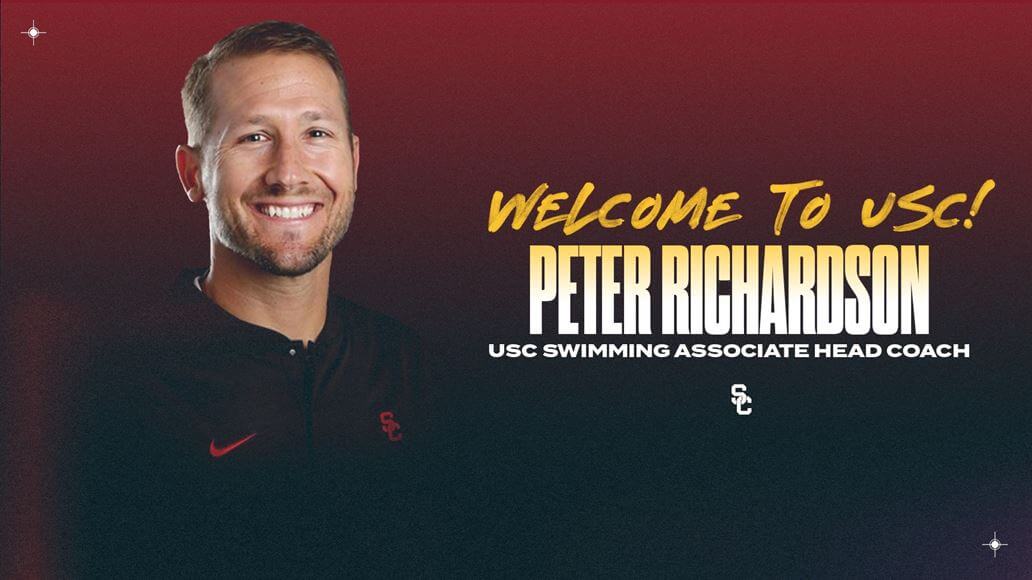 “We are so excited to have Pete joining us here in Troy! We are impressed with his knowledge of the sport and his drive to work with our staff to return USC to its rightful place at the top of collegiate swimming,” said USC head coach Lea Maurer. “What I think our athletes are going to like most is Pete’s enthusiasm and sincere interest in the individual person.  He cares about his athletes which will go a long way to building the trust that underlies successful athlete-coach relationships. We can’t wait to get started!”

In his first year as Associate Head Coach, Pete Richardson helped the men’s team to a 2nd place finish at the 2020 PAC-12 Championships – tied for the highest finish in Arizona history.  The Arizona distance swimmers qualified four individuals for the NCAA Championships and were seeded to score 32 individual points at the eventual canceled championships.

“The opportunity to come back to California and be a part of one of the best universities in the world was an opportunity my family and I couldn’t pass up,” said Pete Richardson. “Los Angeles has unlimited potential – but even more, the energy inside the USC athletic department is what I’m most excited about.”

Before spending three seasons with the Wildcats, Richardson led the University of the Pacific, taking the program to unprecedented heights. Under Richardson, Pacific became a consistent contender in the MSPF Conference and sent athletes to the NCAA Championships in five straight seasons; in 2018 Pacific was one of just two men’s and/or women’s programs to achieve an “A” relay cut without a full allotment of scholarships.

In Richardson’s seven-year tenure, an astonishing 73 school records were established.  In 2017, the Pacific Tigers were collegeswimming.com’s third-most improved team in the country.

Prior to spending seven seasons at his alma mater, Pacific, Richardson was the first ever head swimming coach at Fresno Pacific University, where he took the program from its inception in 2007 and turned into a perennial NAIA power in his five seasons at FPU. Richardson led the men’s team to back-to-back NAIA National Championships in 2010 and 2011 and the women’s team to a NAIA National Championship in 2012. At the 2012 US Olympic Trials, FPU swimmer Cheyenne Coffman placed 10th in the 100M backstroke.

Richardson swam collegiately at Pacific, where he helped lead the Tigers to back-to-back Big West Championships as a team captain during his junior and senior seasons.

— The above press release was posted by Swimming World in conjunction with USC Swimming. For press releases and advertising inquiries please contact Advertising@SwimmingWorld.com.

30 Best Sexy Christmas Gifts for the Naughty and Nice 2021

Jacob Scipio Talks Playing Michael Vargas on Pieces of Her

Rihanna and Nicki Minaj’s Families Hang Out in New Pictures