The Men Contending for Collegiate Titles 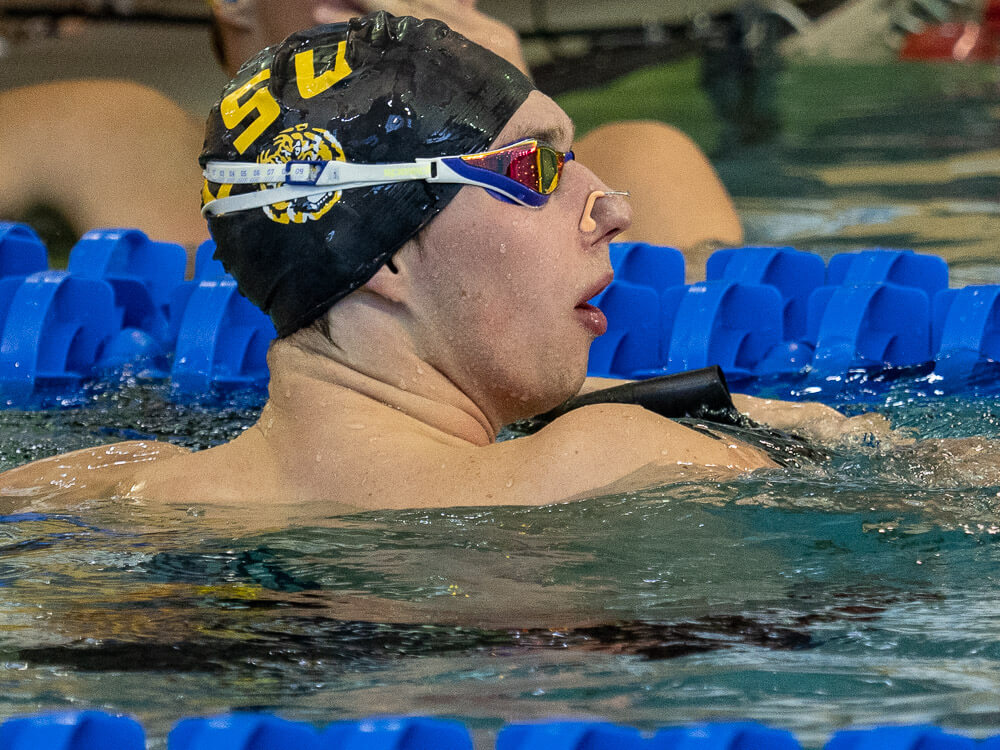 Sprint Freestyle Digest: The Men Contending for Collegiate Titles in the Splash-and-Dash

The 50-yard freestyle final at an NCAA Men’s Championships is an experience best described as whiplash. Start, sprint, turn, sprint and finish in a flash, and it’s essentially impossible to sort out the winner until the times pop up on the scoreboard. The exception, of course, was Caeleb Dressel’s streak of four consecutive national titles in the event from 2015 through 2018, the last of which was a 17.63-second explosion in which he won by more than a second.

Nowadays, the norm is something akin to what we witnessed in March 2022, where five men touched the wall within a tenth of a second while a sixth, Texas fifth-year swimmer Cameron Auchinachie, touched a four hundredths behind but was disqualified. The winner in that race was LSU’s Brooks Curry, a U.S. Olympian the previous year, and he denied Cal’s Bjorn Seeliger by three hundredths. Virginia’s Matt Brownstead and Tennessee’s Jordan Crooks each touched in 18.60, merely one hundredth behind Seeliger, and NC State’s Nyls Korstanje went 18.66.

Moreover, Indiana’s Bruno Blaskovic made history in the event, although not the type he wanted to make — he was the first swimmer in college swimming history to ever go sub-19 in prelims but miss the championship final. How about that for depth?

For the 2022-23 season, six of the eight A-finalists from 2022 return (all except Auchinachie and fellow Texas swimmer Drew Kibler), and so are six other men who went sub-19 at some point during the season. We have not even reached the end of the midseason invitationals, and the list of sub-19 performers already includes Crooks, Florida’s Josh Liendo, Tennessee’s Gui Caribe, Arizona State’s Jack Dolan, Curry and NC State’s David Curtiss.

Crooks has been perhaps the most impressive performer in all of college swimming so far this fall, and his run included a blistering 18.27 performance at the Tennessee Invitational that tied him with Seeliger for second-fastest in history behind Dressel. New to the party is Liendo, a Canadian swimmer who won a pair of individual bronze medals at the World Championships this summer and then an individual gold and bronze at the Commonwealth Games.

We’re still four months out from the NCAA Championships, but it would be impossible to declare a favorite right now. Curry and Liendo have the most experience coming through in the most significant of races, while Seeliger and Liendo have the most speed. But a scenario like last year featuring a blazing qualifying round and another blanket finish in the final is the most likely outcome for this season’s NCAA Championships.

It took 41.52 to qualify for the NCAA A-final in the four-lap race a season ago, and seven of the eight men in that final return: Curry, Seeliger, Stanford’s Andrei Minakov, Brownstead, Crooks, Virginia’s Matt King and Texas’ Danny Krueger. Similar to the 50 free, Seeliger had the quickest time of the meet last year (40.75), but in the biggest moment, Curry got the job done in the final.

So far this year, Crooks has already surpassed his career-best effort with a time of 41.17 at the Tennessee Invitational, and Caribe has entered the mix with a time of 41.44 to rank No. 2 nationally. Liendo, Curry, Florida’s Macguire McDuff and Virginia Tech’s Youssef Ramadan have all visited sub-42 territory already. King looks likely to take a step forward this year after he won two events at U.S. Nationals (long course) in late July, and he split 40.91 on a 400 free relay for Virginia at the Tennessee Invite.

You could call Curry the odds-on early favorite to win this event in March as the defending champion. Or Liendo because of his international success. Or Seeliger because he owns the fastest career-best time. Or Crooks because of his early-season success. If the 50 free is a mad dash, the 100 free is an almost-as-mad-and-slightly-extended dash with the extra wildcard of the race being held on the final day of the meet.

Cal and Texas, the top two teams in the country every year since 2014, have yet to race their midseason meets, so the full picture of relays remains murky. Here’s what we do know: Florida, Arizona State and Tennessee are all in really good position. All three teams posted times in the 2:47-range in the 400 free relay at their midseason meets

The Gators were national champions last year in the 200 free relay and 200 medley relay, and despite losing Kieran Smith and Will Davis, the Gators are still set up really nicely with Adam Chaney and Eric Friese returning from both first-place squads, Liendo added to the mix and McDuff and Julian Smith having shown strong improvements this year.

The Volunteers, who finished 16th in both sprint relays at NCAAs last season, would have been a long shot to own the top times in the country at Thanksgiving, but here we are. Thanks to Crooks and Caribe, Tennessee already has top-eight-worthy times in both events. At the Volunteers’ home invitational this past weekend, Tennessee beat sprint stronghold Virginia in both relays, although past performances indicate the Cavaliers should have plenty more in the tank by the end of the year.

Even with team competition at the forefront, college swimming is the best farm system for U.S. international teams, so we must consider who from the college ranks might be on track to make an impact internationally either in 2023 or 2024. The most recent success story is Curry, an unlikely breakthrough swimmer in the summer of 2021 when he qualified for the Olympics as a relay alternate before making an individual World Championships final in 2022. Who is next?

King is the most likely swimmer since he has already achieved some success on the national level in the 50-meter course, while many of the top college sprinters represent other countries internationally (Liendo from Canada, Crooks from the Cayman Islands and Caribe from Brazil). But you can bet that the top coaches and officials at USA Swimming are looking to the college ranks for talent, particularly with Dressel’s future somewhat murky and a long list of 47-second 100-meter freestylers from 2019 having retired or seen a dip in success in the years since.

No Subscription Required with 3G Cardio Treadmills and Exercise Bikes