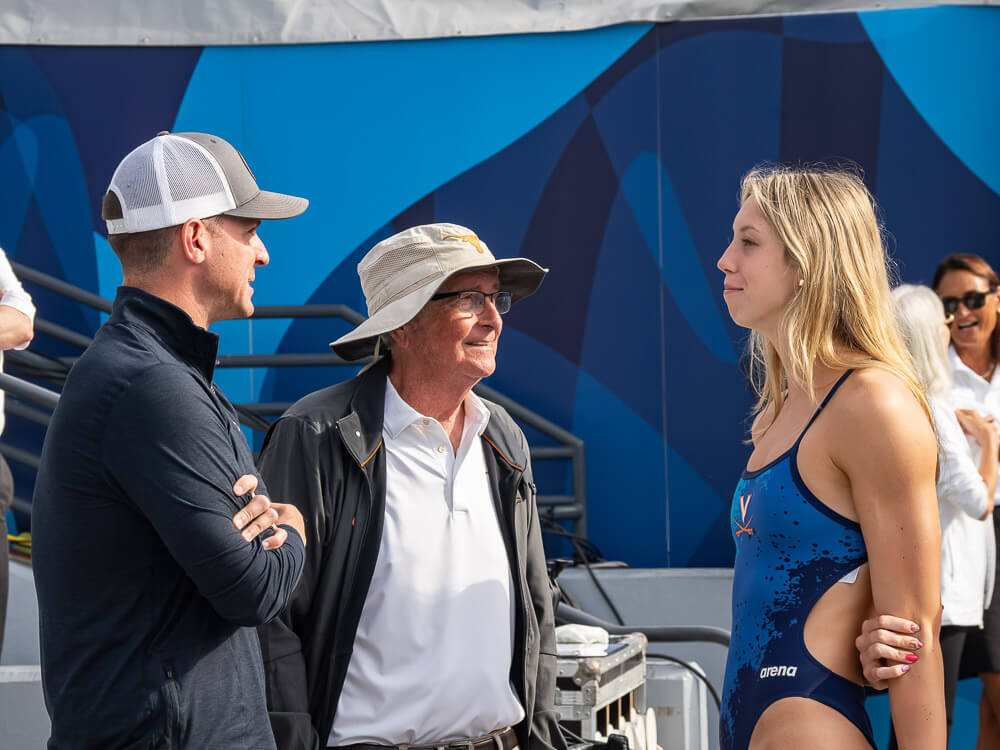 A normal dual meet between the University of Texas Longhorns and University of Virginia Cavaliers is plenty exciting for early November — the two-time defending national champion Virginia women against the surprise second-place team from last year and the powerhouse Texas men hosting a rising Virginia team with plenty of stud swimmers. But as Texas coaches Eddie Reese and Carol Capitani explained, this meet will be held with a twist as the women and men’s teams are scored together Friday night.

Reese, the 81-year-old coach who has captured 15 national titles and always has a quick wit, said of the format, “Don’t believe it’s ever been done in a dual meet situation.” Reese added, “We’re trying to make a little more excitement for the crowd and get more people to watch swimming instead of just watching it during the Olympics on TV sets.”

It’s no surprise that Texas and Virginia, led by sixth-year head coach Todd DeSorbo, would want to schedule a dual meet between the two programs.

Indeed, the Virginia women are bringing a trio of individual NCAA champions from last year, Alex Walsh, Kate Douglass and Gretchen Walsh, to town, while Texas’ highest-profile women are breaststrokers Anna Elendt and Lydia Jacoby, distance freestyle Olympian Erica Sullivan and versatile senior Kelly Pash. On the men’s side, a group led by 200 and 400 IM World Championships silver medalist Carson Foster, breaststroker Caspar Corbeau and a stable of middle-distance swimmers will get a test from a Virginia squad with emerging names like Matt King and Jack Aikins.

“It’s going to be a real test for us, and I really like that,” Reese said. “A lot of times, we aren’t really tested this time of the year, and this is going to be great for us. I hate the word ‘step up.’ We’re going to find out how good we are now.”

But Friday night’s session won’t be a normal dual meet. The Texas assistant coaches, Wyatt Collins (men’s) and Mitch Dalton (women’s) came up with the idea for the combined dual meet, and the setup will include a light show and swimmer introductions that Capitani compared to an ISL meet. The Texas mascot “Bevo” will be in attendance at the Lee and Joe Jamail Texas Swimming Center. Each team will race women and men together in a mixed 400 freestyle relay. When the teams race again Saturday morning, the normal split-up scoring of women and men will return.

“It will be fun to see how many people get up and support swimming,” Capitani said. “A lot of people don’t go to swimming because it’s not very fun. It’s fun if you know swimming, but it’s not fun if you don’t normally go to swimming. We want to make this fan-friendly. If we have to take a hit on the swimming side because it’s not perfectly set up, that’s alright. Getting our athletes to race with a bigger crowd, with the noise, with some fans behind it will be pretty fun.”

Best Kindness Books for Kids, as Recommended by Teachers