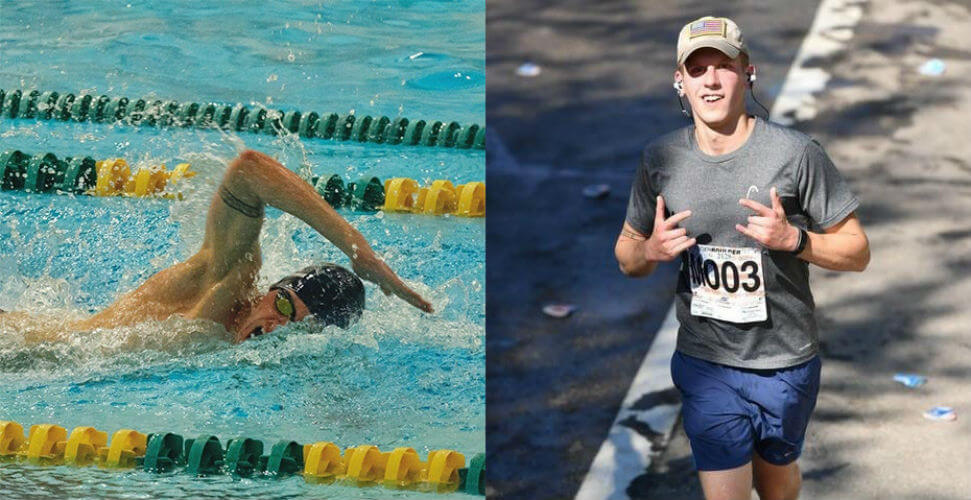 There is a certain camaraderie between swimmers and runners. It’s indescribable, but the two cardio-intensive sports often are paired. Many swimmers try to cross-train into running and vice-versa, but find it difficult to adapt to the different mechanics that the other sport demands. The likes of Florent Manaudou are among those for whom running is a non-starter, for example.

The Natural vs the Unnatural:

Dr. Howard Wainer of Princeton released a study to the American Statistical Association’s journal Chance in 1993 detailing the statistical differences between swimming and running. Dr. Wainer realized that humans were not built to be able to effectively travel through water at the same speeds as on land. He found that within the same timeframe, runners, on average, travel three and half times the distance that swimmers do.

Running is a natural motion for the human body. Humans have needed the ability to run for centuries and have evolved to be able to run more effectively for longer distances. Swimming, in comparison, is much more modern. The ability to swim has never been needed for humans to continue to survive so the human body has not adapted into a more swimmer-friendly shape. Because of this lack of adaption, swimmers face more drag while in the water than runners do.

Studies by NutriStrategy have shown that running and swimming are comparable in the amount of calories spent. Swimming the freestyle stroke for 30 minutes burns just about as many calories as running on a treadmill at six and a half miles per hour for thirty minutes.

Though similar in caloric expenditure, the mechanics of swimming and running are vastly different.  The two exercises have some overlap in the muscle groups used, though swimming utilizes many more than running.

Running: There are five main muscle groups used while running, mostly focused in the runners’ legs. The quadriceps, the calves, the core, the glutes, and the hamstrings are all essential muscles that runners must train to reach their peak performance.

Swimming: Swimming is much more of a full-body exercise. Swimmers train 24 separate voluntary muscles to reach their peak performance. Muscles from the sternocleidomastoid in the neck to the flexor digitorum brevis in the foot are used in the freestyle stroke. Swimmers’ entire bodies are utilized when swimming, so during training and conditioning, swimmers must focus on working all 24 of these muscles.

The difference in impact felt while performing these two activities is important as well. Running can do damage to joints. The impact of consistently pushing off the ground can damage the cartilage in the knees. While there are methods of mitigating some damage, running will always require force from the runners’ legs pushing off against resistance. This is why runners are more prone to injuries like shin splints. Swimmers feel little to no impact while exercising. Apart from the wall turn, swimmers have no contact with anything but the water. This is healthier for joint health in the long run and is why many athletes with arthritis or bad joints choose swimming over running.

Both running and swimming depend on strong lung strength to oxygenate the muscles while the actions are being performed. Regulating breathing while running is important, but not vital to the success of the runner. However, for swimmers, breathing can take seconds away from their final times. Swimmers train their breathing to be quick, short, and spaced out. Swimmers, therefore, receive less oxygen while exercising, and is the reason many people feel more exhausted after swimming for 30 minutes as compared to running for 30 minutes.

These two breathing techniques are also why it’s hard for swimmers to run. Adapting to the slower, consistent breaths feels unnatural for many swimmers.

All commentaries are the opinion of the author and do not necessarily reflect the views of Swimming World Magazine nor its staff. All swimming and dryland training and instruction should be performed under the supervision of a qualified coach or instructor, and in circumstances that ensure the safety of participants.