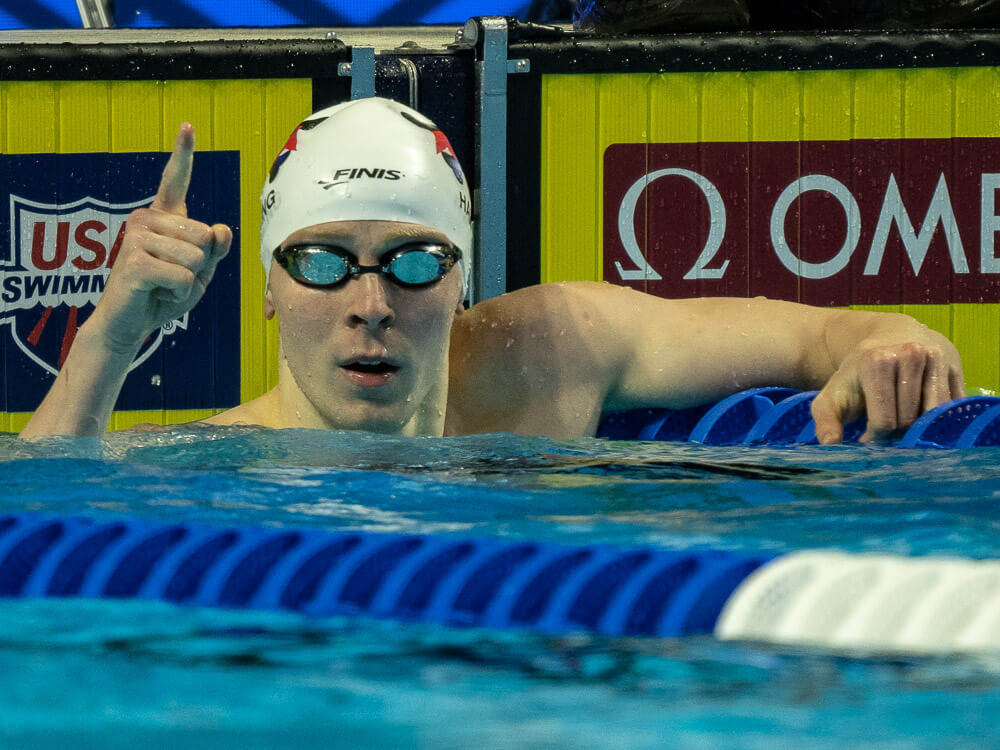 Competing at meets is only part of the equation for swimmers. Getting to and home from competitions is another element in itself, and there are numerous stories of travel difficulties. Here are some, capped off by the King of Travel Woes, Zach Harting.

It was 2017 Worlds, when we had to travel from Croatia to Budapest on the bus. It was going to be a cruising three-to-four-hour bus trip, but it ended up being an eight-hour ride due to some mechanical issues with the bus.

On top of that, the AC was broken. We had a guys’ bus and a girls’ bus, and I think the guys’ bus was the only one with no AC. We had our shirts off trying to keep our cool, but once we started sweating, we had damp-heat, and we were riding like this with our shirts off for a steady eight hours. It was a team-bonding experience for sure.

In terms of my performance, the 400 IM was the last day of the meet, so I didn’t have much of an issue adjusting to that. But I’m sure people swimming in the next two days or so had to have been mentally facing some doubt if this would ruin their taper.

But in the end, we all swam super well in Team USA fashion!

Me and a few teammates missed our connecting flight from Munich to Rijeka en route to Worlds camp in Croatia this year. The next available flight to Croatia wasn’t until 12 hours later or something crazy like that, and it was to Zagreb. That meant we had to take a two-hour bus ride once we landed in Zagreb to get to our hotel for camp.

Luckily, we were able to leave the airport and find a pool to train in Germany and ended up having a lot of fun. So flash-forward 12 hours or so, we finally make it on our flight to Zagreb and land at like 11:30 p.m., and I have bad FOMO (fear of missing out) because I’m seeing everyone’s pictures at the hotel having fun and enjoying the views.

Then, on the two-hour bus ride into Rijeka, we hit a terrible thunderstorm, which made the ride even longer and more difficult. We got to the hotel around 2 a.m. and had to get up at 7 a.m. for practice the next day!

Probably traveling to the training camp in Croatia this summer. We were stuck in a German airport for 12 hours…but it happened so far from (when) the meet (took place) that I felt it had no impact on my performance.

I injured my lower back 10 days out of Olympic Trials 2021. I could either stand up or lie down to manage the pain, and even sitting for a short drive was extremely uncomfortable.

A flight usually has my healthy back feeling tight. I wasn’t looking forward to the aftermath of this one. For my flight to Omaha a few days before my race, I had planned to stand in the back for as long as I could after takeoff, and while we were in the air, try and manage the pain. Unfortunately, my flight was delayed, and I was confined to my seat for over an hour on the tarmac. It felt like five hours! I couldn’t get out of my seat. I am usually a relaxed traveler, but I was melting down. I think I cried at one point.

At baggage claim, I asked a fellow passenger to pull my bag off the conveyor belt, and then I laid flat on the airport floor to relax my muscles before calling an Uber. I was already in a tough place mentally—and physically—before the travel day, not with the usual performance nerves, but with pain management.

It’s a challenge to convince your mind that you are ready to race, and race well, when your body has a different opinion! I raced two days later. An old swim friend helped me get my racing suit on in the locker room, so I didn’t have to bend over as much.

Certainly not my worst travel day. I didn’t have to run through three terminals, I didn’t miss a flight, my bags were not lost, but not a great situation overall.

I was flying over to Shenzhen, China, for the FINA Champions Series. I was flying over there to do a 200 fly, and I entered myself in some relays. I got there 12 hours later than I was supposed to. I dropped my stuff in the room, caught the bus and went to the pool. I swam, felt kind of wonky after the long flight. I raced the next day. I think I went 1:58, which was right on my fastest in-season. I swam a relay that night, and then I had the whole next day off, and then I flew back to the States, directly to the Knoxville Pro Series. I landed at 8:30 at night, and I was racing the next morning in the 100 fly. I remember in prelims doing a start and being like, ‘Oh my gosh, this is the worst thing of all time.’ I felt like a six-year-old doing a start for the first time. It probably wasn’t that bad, but it did not feel fast at all.

After Olympic Trials in 2021, we got delayed because we had one airhorn or bullhorn broken. It was a federal regulation, so we couldn’t go without it. We got delayed three-ish hours there. We were supposed to get back to Louisville at 11 a.m., and we ended up getting in at 11 p.m. It was a 12-hour delay. There were six of us Louisvillians. I was the oldest. We didn’t have any coaches with us because they were still there for the rest of the meet. Our whole thing was, ‘You can’t be negative. This already stinks. We’re going to make the most out of this.’ I texted one of our alumni in Chicago, and we met her for lunch, and she let us hang out at her apartment for a few hours. That was a 12-hour delay, and that was the whole reason we took the early flight.

For Worlds in 2019, me, Arthur (Albiero), Mal (Comerford) and Kels (Dahlia)…our flight got delayed on the way out, so we were all one day late to the Worlds training camp in Singapore before we left for South Korea. Arthur’s and my bag did not make the connection. I think they gave us $40 or $80 as a “Sorry,” and they told us to check back tomorrow. We were a day late with pretty much no baggage. So when you’re going somewhere, definitely pack your cap, goggles and suit!

For Tokyo (last year), when I was flying out to Hawaii for the training camp, we were delayed for a crew member not being there. I heard them say the crew member was in a different city. It wasn’t like they overslept their alarm. It was a scheduling thing, and they were on the wrong plane. They were not anywhere close. I ended up missing my flight and connection, and it was the only one to Hawaii for the day, so I ended up rebooking and flying out to Hawaii the next day.