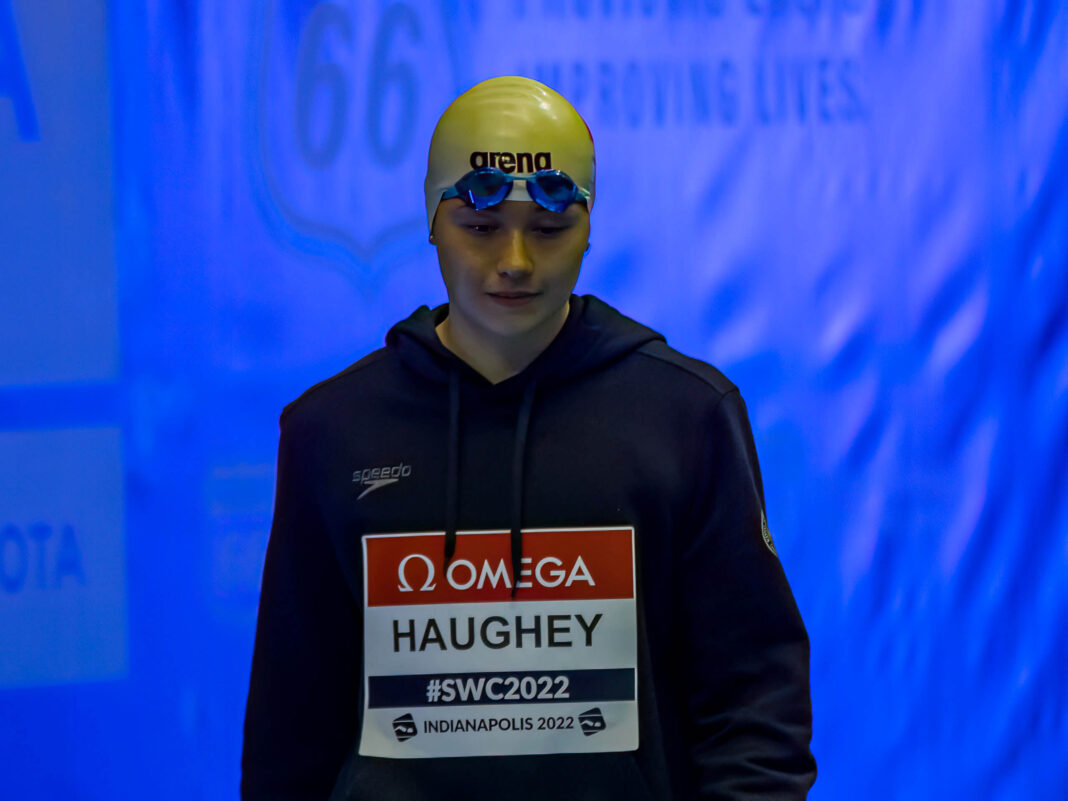 After swimming the fastest 100-meter freestyle split in history for short course meters Tuesday evening to lead Australia to gold and a world record in the 400 free relay, Emma McKeon returned to the pool Wednesday morning to race the individual 100 free. McKeon was Olympic gold medalist in the event in 2021, but it was Olympic silver medalist and defending champion Siobhan Haughey who picked up the top seed by a narrow margin over McKeon.

In the slower heats of the 800 free, Brazil’s Gabrielle Roncatto posted the top time by one hundredth over Japan’s Yukimi Moriyama. Roncatto clocked 8:25.45, with Moriyama just behind at 8:25.46. The Netherlands’ Imani de Jong posted the third-best time at 8:25.84. Those times will be compared with those posted in Wednesday evening’s final. Australia’s Lani Pallister will be favored to add 800 free gold to her previous title in the 400 free Tuesday.

Hong Kong’s Siobhan Haughey is making her return to championship racing this week in Melbourne after missing the long course version of the World Championships with injury. Haughey established the time to beat in the 100 free prelims with a mark of 52.04 while the Netherlands’ Marrit Steenbergen and Australia’s Emma McKeon tied for the win in the final heat at 52.23 for the next-best mark in prelims. France’s Beryl Gastadello took fourth in 52.34, and Australia’s Madison Wilson was fifth (52.43), while the top finisher from this year’s long course World Championships entered in the race, bronze medalist Torri Huske of the United States, placed sixth in 52.48. Earlier this year, Ruta Meilutyte returned from a multi-year retirement to win gold in the 50 breast and bronze in the 100 breast at the long course edition of the World Championships, and she will surely be in contention for a short course title in the 100-meter race after she led the way through qualifying with a time of 1:03.81. Meilutyte posted the quickest time in the final heat after South Africa’s Lara van Niekerk (1:03.93) and the United States’ Lilly King (1:03.94) had already been under 1:04.

China’s Tang Qianting, who was the surprise short course world champion in the event last year, qualified fourth in 1:04.07. Last year’s silver medalist, Sweden’s Sophie Hansson, took ninth in 1:04.64, while the silver medalist from long course Worlds, Germany’s Anna Elendt, qualified sixth (1:04.53). In a bit of a surprise, long course world champion Benedetta Pilato of Italy took 13th in 1:05.21, so she will surely need a much quicker performance to advance from the semifinals into the final.

France’s Charlotte Bonnet and China’s Yang Chang tied for 15th in 1:05.28, and that left Australia’s Jenna Strauch, the silver medalist in the 200 breast at the long course World Championships, out of the semifinals by two hundredths. The United States closed out the session by posting the top qualifying mark in the 800 free relay. Erika Brown, Hali Flickinger, Jillian Cox and Leah Smith combined for a mark of 7:42.91, while Australia’s Leah Neale, Meg Harris, Brittany Castelluzzo and Laura Taylor took second in 7:44.77. A team from the Netherlands anchored by Marrit Steenbergen placed third in 7:45.73 while China, Canada, Brazil, Japan and New Zealand also qualified for the final.

In Melbourne, the three women who joined Smith to led the U.S. to an 800 free relay long course world title this year are absent, but Erin Gemmell will surely be added to the roster while Alex Walsh, Torri Huske and Claire Curzan are all possibilities. For Australia, Mollie O’Callaghan and Madison Wilson will be added to a team with a very good chance of winning the title, and Emma McKeon is another possibility.