Shayna Jack In Race Against Time To Race at Commonwealth Games 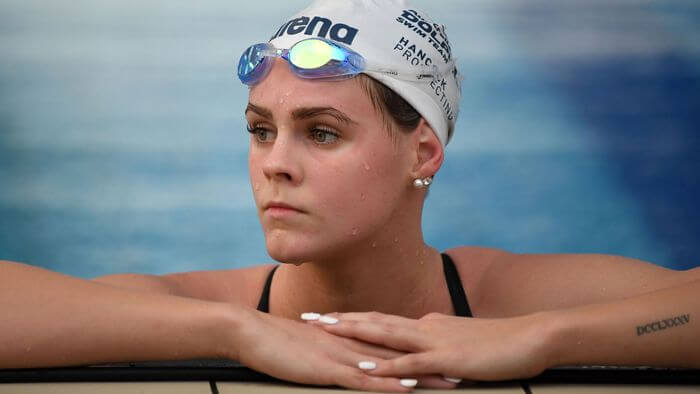 Shayna Jack faces a race against time to be ready for the Birmingham Commonwealth Games after suffering a suspected broken hand in the warm up for today’s 100m freestyle heats in Budapest.

The 23-year-old, who has already won gold and silver at these World Championships, was a shock no-show in the final heat after her silver medal anchor swim in Australia’s 4x100m mixed medley relay last night.

News then filtered around pool deck and on the live television broadcast that Jack had suffered a broken hand in the warm up pool.

She later posted on Instagram, saying: “Due to an unfortunate incident in this morning’s training session, I have broken my hand.

“I am broken-hearted to announce that I have to withdraw from the rest of the competition and that I won’t have the opportunity to achieve everything I wanted to.

“However I am still so proud of what I’ve achieved, how far I’ve come and the amazing teammates I’ve been able to medal with. As I always do I turn my focus to the future, and that is the Commonwealth Games. Starting this afternoon I’ll be back in the pool doing a kick-session.”

Jack’s comeback after spending two years sidelined as she fought to clear her name after a positive drug test in 2019, has been one of the most anticipated returns in many years.

With the guidance and support of St Peters Western coach Dean Boxall, Jack hasn’t put a foot wrong in her determination to get back to the top of her sport.

The Commonwealth Games begin on July 28 – just over a month away and Jack is a key player in the individual 50 and 100m freestyle events as well as Australia’s relays, after her anchor roles last night and on the opening night’s gold medal winning 4x100m freestyle team.

A team spokesman said it was too early to say whether Jack would be able to compete at the Commonwealth Games in Birmingham next month.

A relay that has unprecedented depth of any country in recent years – the foursome of Mollie O’Callaghan, Meg Harris, Madi Wilson and Jack impressive winners in Budapest without Olympic golden girls Emma McKeon and Cate and Bronte Campbell.

Without Jack, Australia will again call on that depth, that includes Brianna Throssell and Leah Neale as they look to protect their golden record in Birmingham against the likes of Canada and England.

Jack was one of the favourites to claim the gold medal in Budapest. Teammate  O’Callaghan raced in the heats, posting the fastest time overall to advance to the semi-finals – and now holds the trump card to become Australia’s fifth world champion in the women’s 100m freestyle, joining Jodie Henry (2005), Libby Trickett (2007), Cate Campbell (2013) and Bronte Campbell (2015).

Introduce Yourself to Students With These Clever Ideas