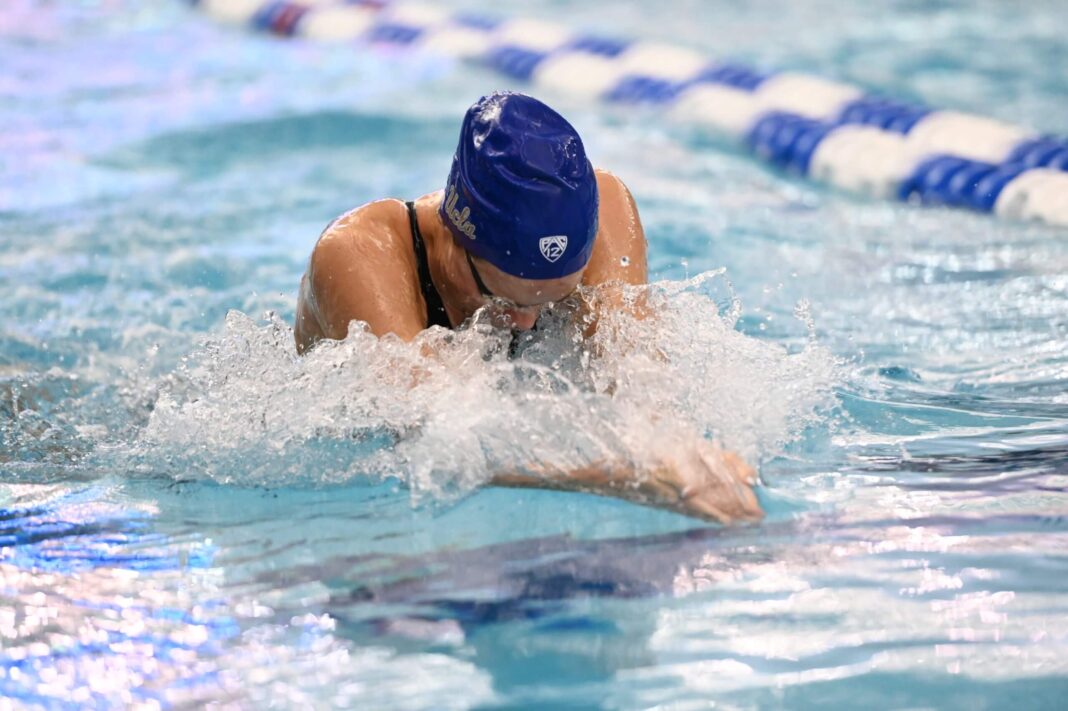 Rosie Murphy set one of four pool records on the day as UCLA handled UC San Diego, 193-99, in a women’s meet on Saturday.

Murphy was the only of the four pool marks set by a UCLA swimmer at Canyonview Aquatic Center. The freshman went 1:58.98 to win the 200 backstroke, downing the pool mark set by Boise State’s Molly Hogg in 2018 (2:00.21).

That swim came at a pivotal moment in the meet, the third consecutive 1-2-3 sweep by the Bruins to give them unquestioned control, on the way to their fifth consecutive dual meet win to begin the season.

The sprinters had provided the first two of those. Rachel Rhee won the 50 freestyle in 22.81, with Claire Grover second. Grover went 50.99 to win the 100 free ahead of teammate Brooke Schaffer. Gizem Guvenc, winner of the 200 free, was third in the 100. Schaffer was third in the 200 free.

UCLA started by winning the 400 medley relay with the squad of Sophia Kosturos, Eva Carlson, Gabby Dang and Grover. Kosturos won the 100 back, Dang the 100 butterfly. Fay Lustria won the 200 fly and finished third in the 200 back.

Katja Pavicevic rewrote both of the breaststroke pool records at her home pool. The senior went 1:01.78 in the 100 breaststroke, undercutting the time of 1:02.14 she had set two months ago. She then went 2:13.58 in the 200 breast, lopping nearly two seconds off the pool mark set in 2018 (2:15.27, by San Diego State’s Klara Thormalm). Runner-up Ana Jih-Schiff of UCLA was also under the pool record.

The other mark came via senior Juli Arzave, who hacked nearly five seconds off the record she had set in November in the 1,000 free by going 10:03.57. Arzave also won the 500 free. The Tritons finished the meet by topping UCLA’s A 200 free relay by .03 seconds, the quartet of Miranda Renner, Tina Reuter, Jordan Phillips and Josette Odgers getting it done in 1:33.59.

How GSSI Scientists Use Sweat & Tech to Improve Athlete Performance