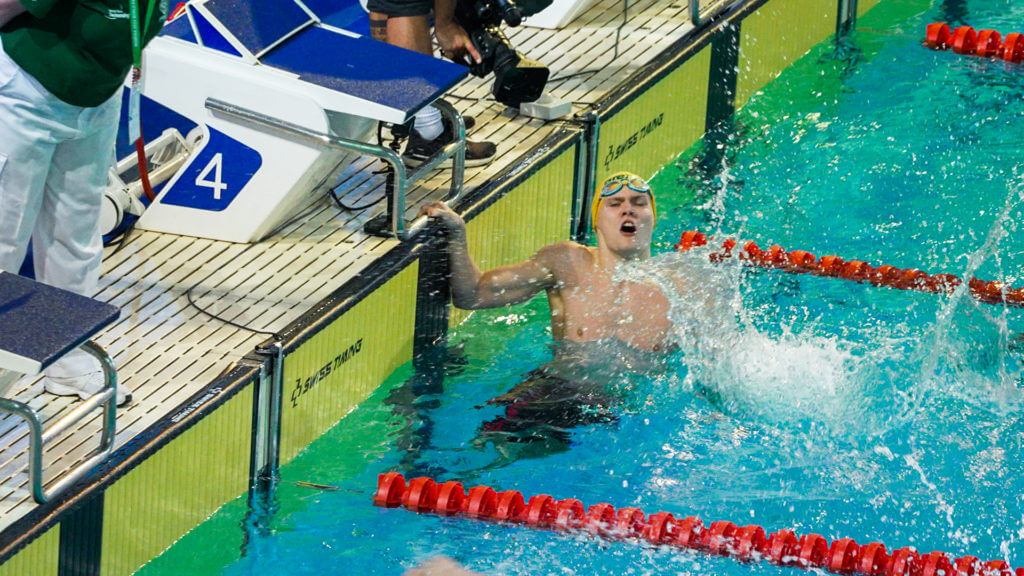 Ever since 2014 Timothy Hodge has looked up to Australian Paralympic legend Matthew Cowdrey and on night two of the World Para Swimming Championships in Portugal tonight the 21-year-old broke his hero’s world record.

But no ordinary world record – a time in the 200m individual medley for SM9 swimmers that has stood since the 2008 Paralympics in Beijing when Cowdrey ruled the pool.

At just 14, Hodge achieved selection to his first Australian team, travelling to Glasgow, Scotland, for the 2015 world championships.

And according to Paralympic Australia it was a bittersweet moment for the rookie from Auburn, a long standing swimming stronghold in Sydney’s western suburbs where he is coached by Clinton Camilleri.

Hodge missed the opportunity to compete with 14-time Paralympic gold medallist Cowdrey, on the world stage – with the now respected South Australian member of Parliament announcing his retirement earlier that year.

Swimming in his second Paralympic Games campaign in Tokyo 2020, Hodge found his spot on the dais for the first time. The 20-year-old claimed his first Paralympic medal in the men’s 100m backstroke S9 and then went one better to take silver in the 200IM.

But tonight at the packed-out Funchal Swimming Pools Complex, Hodge realised a career-long dream, turning his silver and bronze medals into gold and in world record time ahead of Ugo Didier (France) 2:15.74 and Federico Morlacchi (Italy) 2:20.99. It was the second Australian gold of the night with Paralympic gold medallist Benjamin Hance setting a new World Championship Record in the men’s 100m backstroke (S14), clocking 57.34 – 0.46 outside his own world record.

And the third gold for the meet for the Dolphins, following Rowan Crothers opening night gold in the 50m freestyle for S10s.
In other finals tonight for the Aussies, Cairns hero Grant ‘Scooter’ Patterson secured bronze in men’s150m individual medley SM3, with a time of 3:13.17 after originally being disqualified and then reinstated to third place after an Australian team appeal was upheld – adding to his silver in the 50m breaststroke on night one.
NSW’s Jasmine Greenwood then added bronze in the 200m individual medley (SM10) to her medal haul touching the wall in 2.32.78 – after she won bronze in the 50m freestyle on night one.

While popular Paralympic silver medallist Col Pearse pulled off a personal best time of 2:13.76 and improved on his Tokyo Paralympic performance, claiming silver in the men’s 200m individual medley S10s. In the same race Rookie Alex Saffy also did a personal best time in his first International final, touching the wall in  2:19.05. for seventh place.

Australia has now won three gold, three silver and four bronze for a total of 10 medals and is currently sitting fifth on the World Para Swimming Championship medal tally.

How Much Avocado To Eat for Heart Health| Well+Good

Kanye West and Kim Kardashian Go Back and Forth on Instagram