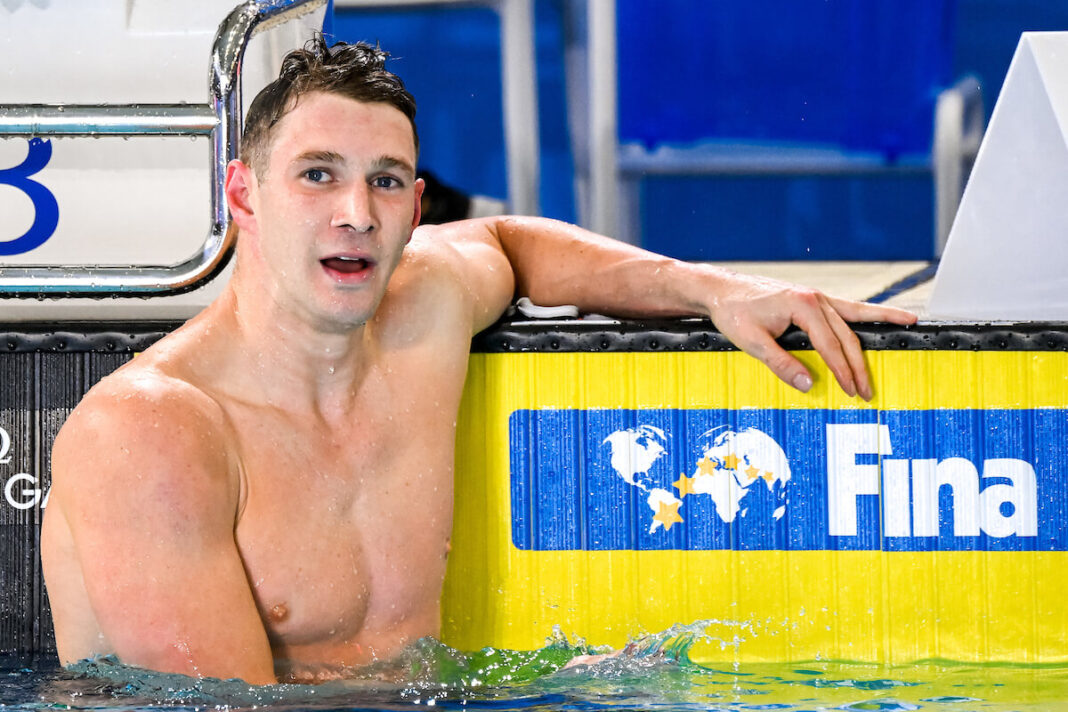 Once Again, Ryan Murphy Unveils Full Display Of Talent – In and Out Of the Water

Some guys just get it in every way imaginable – but few exist. Sure, there are several athletes in the sport who dominate, and have etched themselves among the elite. Ryan Murphy is a star, among the best backstrokers the pool has ever seen. Olympic champion. World titlist. NCAA champ. World-record setter. From a competitive standpoint, he’s done it all.

But Murphy is much more, and while we have alluded to his all-encompassing presence before, the timing is again perfect to recognize what the 27-year-old means on a wider scale – specifically to swimming and Team USA. It was all on display at the World Short Course Championships, which wrapped up on Sunday in Melbourne.

Over the course of the six-day competition, Murphy collected five gold medals and a silver, and notably swept the backstroke events with a trio of stellar performances. Perhaps his most-impressive outing was his clocking of 48.50 in the 100-meter back, an effort which ranks No. 2 in history. As Murphy heads into the 2023 season, he will obviously carry momentum into his training for the summer’s World Champs in Japan.

“It’s really cool to be selected as the Swimmer of the Meet,” Murphy said. “It’s a confusing sport and you never really know how you are going to perform. I always try to put my head down and hope for the best.”

Yet, for all Murphy managed in the water, what he delivered as a captain and ambassador may have carried greater weight. And when an athlete who is already a legend goes beyond his skill set, that is what separates him into a unique category. It didn’t take long, nor was it surprising, that Murphy shined beyond his athletic gifts.

Through the first few sessions of the World Champs, the American men were sputtering. While the women in Red, White and Blue looked sharp, the guys produced several disappointing results. So, when Murphy hopped in the water for the final of the 100 backstroke, it was an opportunity to shift the dynamic in a favorable manner.

Premier captains know how to elicit the best from their teammates, and Murphy has that role down. He’ll hit a younger teammate with a few words of advice. He’ll provide a short speech here and there. He knows a pick-him-up comment can go a long way. But the best captains also lead by example, and Murphy fulfilled that expectation with his title in the 100 backstroke.

No, this version of Team USA was not its strongest, and the female contingent certainly served as the power source. But when Murphy earned his first solo gold of the meet, the effort simply reflected the definition of a captain. Additionally, Murphy called on USA Swimming to review its selection procedures for the World Short Course Champs, both to send the best squad possible into action, and to provide deserved opportunities to athletes who are short-course specialists.

“I think Team USA has to deal with how we select teams, (because) this is a team that really excels at long course,” Murphy said. “I think Team USA did a really nice job this week. We started a little bit slow, but our consistency across all teams I have been on is that we are really tough. We look for a little bit of success and we build on that momentum. Throughout the meet, we found our successes and created the momentum.”

Beyond handling his competitive and leadership duties, Murphy also came through as an ambassador. In a week filled with top-level performances, a dark cloud hung over the final of the men’s 50 backstroke. Just after the start, a double horn sounded, signaling something was awry. Ultimately, the signal turned out to be inadvertent, and when the backstroke flags did not drop into the water, five of the eight finalists raced through the finish.

At the “non-finish,” Australian teenage Isaac Cooper had registered a time of 22.49, an effort that would have landed him the gold medal. However, officials quickly ruled a rerun of the final would take place later in the evening, and in that final, it was Murphy who edged Cooper for the title. The Aussie was stung by the outcome, as he was denied the first world championship of his blossoming career.

With deep perspective, Murphy tactfully handled the situation – in his on-deck interview, meetings with the media and in private. The situation was an instance of Murphy doing what he felt was right. It was the Cal graduate speaking his mind, just as he did at the Olympics in Tokyo, when he felt it was necessary to discuss doping in the sport.

“From my perspective, it was a little bit disappointing the way that it played out,” Murphy said. “It worked out in my favor, but I feel for Isaac Cooper. He’s 18 years old and winning a world title certainly means a lot. I talked to him real quick after the race, but I’m going to make sure to talk to him and let him know that in my mind, he won that race. It’s definitely a mix of emotions.”

The march toward the 2024 Olympic Games in Paris is on, and with the calendar about to flip to 2023, that edition of the Games will be here in a hurry. For Murphy, the road to the French capital will be navigated while deftly wearing multiple hats

The Best Super Bowl Commercials of 2023

Meet the New Celebrity Babies of 2023