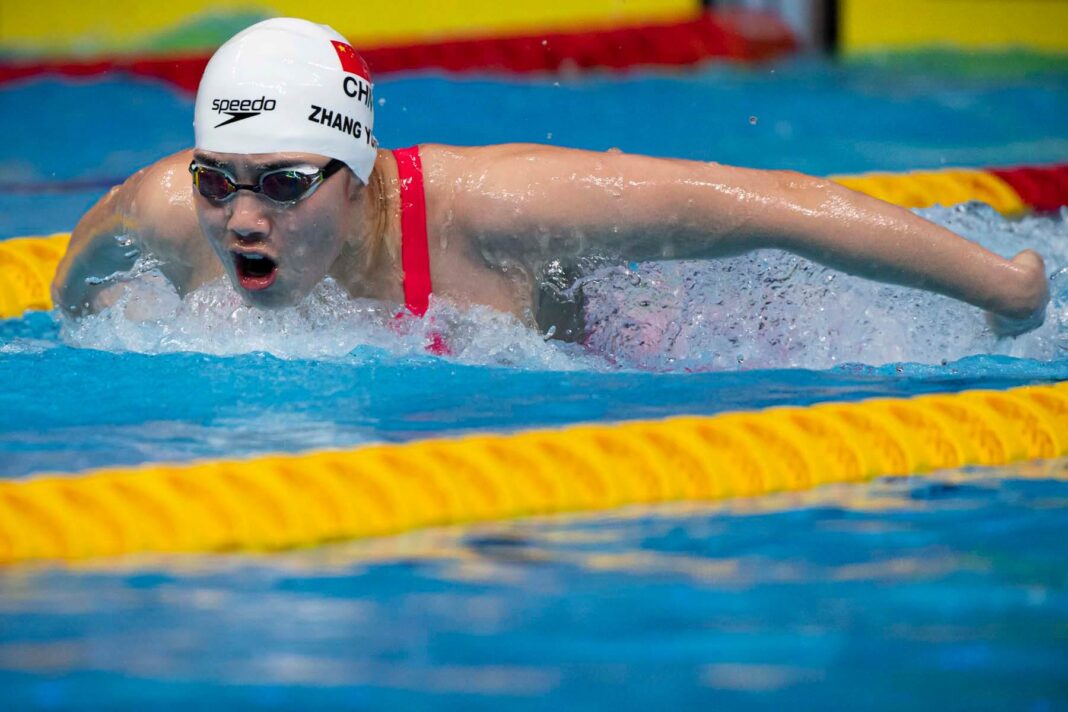 Olympic gold medalist Zhang Yufei of China won the bronze medal in the 50 butterfly at the 2022 World Short Course Championships in Melbourne.

She then withdrew from her other events the rest of the week. On Sunday, she gave some explanation for her shorter week, an elbow injury.

She posted an update on social medial.

“Hi everyone, I’m the 2022 bronze girl. I want to apologize for my withdrawl in the latter part of the meet as I injured my elbow by accident. Now I feel a little better after treatment, so don’t worry too much about me. Let’s keep flying next year,” Zhang Yufei posted on Twitter through the China Swimming News and Results page.

Zhang Yufei Weibo Update:
Hi everyone, I’m the 2022 bronze girl.
I want to apologize for my withdrawl in the latter part of the meet as I injured my elbow by accident.
Now I feel a little better after treatment, so don’t worry too much about me.
Let’s keep flying next year. pic.twitter.com/GSVUWh0c76

The 23-year-old Zhang was named the Breakout Performer of the Year in 2021 by Swimming World. She arrived in Tokyo as true medal contender for the first time at a major meet, and she delivered on that promise she showed in the leadup. She nearly captured gold in the 100 fly as she led for much of the second lap before Canada’s Maggie MacNeil ran her down. MacNeil won gold in 55.59, just five hundredths ahead of Zhang’s silver medal.

Three days later, Zhang won two gold medals in a single session with historic performances. First, in the women’s 200 fly final, she buried the field early and led by a bodylength after just 50 meters. She would never be seriously challenged after that. Zhang won by more than a second, and her time was 2:03.86, breaking the Olympic record of 2:04.06 set by countrywoman Jiao Liuyang at the 2012 Olympics. The time was the fastest ever recorded in a textile suit, and Zhang became the third-fastest swimmer ever behind world-record holder Liu Zige and Jessicah Schipper.

A short time later, Zhang Yufei swam the third leg of the 800 freestyle relay for the Chinese women. She entered with the lead, and she delivered with a 1:55.66 split to maintain the advantage going into the anchor leg. She earned another gold medal in that race, and she combined with teammates Yang Junxuan, Tang Muhan and Li Bingjie to set a new world record.

How Destination Canada Is Leading the Way in Sustainable Business Events

What Parents Should Know About RSV