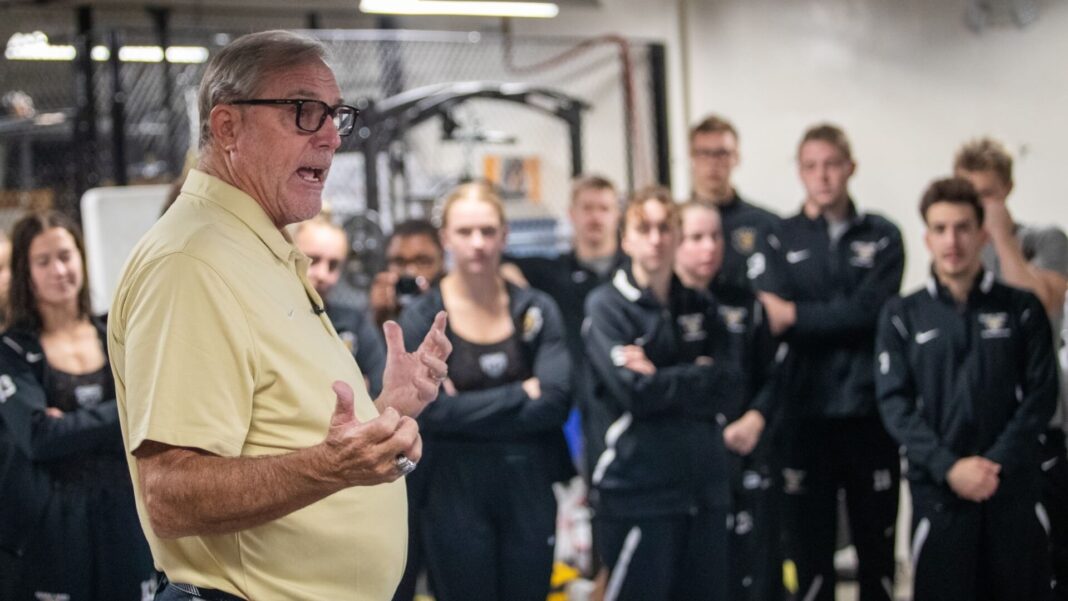 Set to depart with a list of accomplishments and accolades that very few at any level of competition can rival, decorated Oakland University Golden Grizzlies swimming and diving head coach Pete Hovland will retire on May 7, 2023.

Joining Oakland’s men’s program as an assistant in 1979 and taking over as head coach two years later, the Golden Grizzlies have established themselves as one of the country’s elite programs under Hovland’s tutelage, winning their conference championship every season he has been a member of the staff, a run that now stands at 44 consecutive.

He has also served as Oakland’s women’s head coach for a total of 24 seasons, the last 22 of which consecutively, helping them extend their own remarkable streak of 28-straight league titles.

Leading the men to four consecutive Division II National Championships from 1994-97 and collecting seven NCAA Coach of the Year Awards throughout his career, Hovland’s decision to step away came after several talks with his wife, Laurie, and others closest to him.

“In recent conversations with close friends, colleagues and my wife about when it was time to retire, they all said, ‘You’ll just know,’” Hovland said.

“I would like to thank my swimming and diving family first and foremost. Without them, my life would never be the same. Thank you for believing in me over the past 44 years. Thank you for helping me build our championship culture and for allowing me to steer you down this wonderful path together. Thank you to those that have allowed Laurie and I to remain in your lives and become even closer with you and your families today.

“To the many colleagues I have had the pleasure of working with while building Oakland’s athletic foundation, thank you for being such a great friend over the years and for sharing your knowledge and expertise so willingly.

“A special thank you goes out to my many assistants and staff members. The championships and success have only been possible because of the assembly of so many talented individuals that have wanted to follow a similar path. You are only as good as your staff.

“To Oakland University and the many administrators I have had the fortune of working with, thank you for providing all the support, encouragement and the fantastic opportunities to grow with this wonderful institution over these past five decades. To Corey VanFleet and Ernie Maglischo, thank you for your insight and belief in me.

“Finally, to my current team members and future recruits, I am confident that under the current leadership team of President Ora Hirsch Pescovitz, Athletic Director Steve Waterfield and Associate AD John Ciszewski, our programs could never be in better hands. With our unyielding alumni and administrative support, the future and direction for Oakland University’s swimming and diving programs is unparalleled.”

A 23-time All-American and five-time individual national champion himself during his days as a student-athlete at Chico State in California, Hovland earned his bachelor’s degree from the school in 1976 and a master’s from Northern Iowa three years later.

At Chico State, he was coached by Ernie Maglischo, who became Oakland’s head coach in 1979 and handpicked Hovland to come to Rochester and join his coaching staff.

Inducted into Oakland University’s Hollie J. Lepley Hall of Honor alongside men’s basketball coach Greg Kampe in a special two-member class in 2012, Hovland has also been enshrined in the following:

“Remarkably, he has led the University’s swimming and diving program for over half the University’s existence and has achieved incomparable success that is nearly impossible to believe. Despite decades of championship success, one of his most enduring legacies is the thousands of OU student-athletes that he coached who have made remarkable contributions in their personal and professional endeavors after they left OU.

“I appreciate all that Pete and Laurie have done for OU Athletics and the entire University. They epitomize OU Pride. Though we will celebrate and honor Pete over the coming months, I know his current focus remains on coaching this year’s teams as they pursue more championship success. It has been a privilege of mine to work with Pete, and I look forward to watching him write the final chapter of his Hall of Fame coaching career.”

Tracy Huth, a former Oakland University assistant coach under Hovland with the men before becoming head coach of the women’s program and later Director of Athletics, echoed Waterfield’s sentiments.

“Congratulations to Pete for an illustrious career at Oakland University!” Huth said. “It’s hard to imagine Oakland Swimming and Diving without Coach Hovland leading the way.

“Over the past four-plus decades, there has been one constant, one common denominator, one person that has represented the excellence of this program – Pete Hovland. His knowledge of swimming and the coaching profession is unparalleled. He has been able to adapt, grow and excel through the decades.

“For hundreds of men and women, Pete has been a combination of a coach, mentor, adviser, colleague, teammate, counselor, and a true friend. Personally, he has been all of these and a brother. I’m sure there are countless alumni, former Olympic swimmers, current and former colleagues, Oakland Swimming and Diving parents, and friends of Oakland Swimming and Diving that recognize Pete as a member of their family.

“To Pete and his wonderful wife Laurie, thank you for all you have done to help nurture and develop the men and women of Oakland Swimming and Diving. Now, let’s go win one more championship!”

Although the lengthy list of accolades his programs have earned in the pool is unmatched, Hovland has always first emphasized the importance of being a student-athlete to his young men and women and his teams frequently fill the Horizon League All-Academic spots and possess some of the highest grade point averages of any sport at the University.

“The decades of accomplishments, championships and longevity elevate Pete’s legacy to the highest coaching peak where he takes his place among renowned NCAA coaches.

“Oakland University has benefited greatly from Coach Hovland’s mentoring and commitment to developing student-athletes in the pool and classroom. The OU community is proud and grateful to have had Coach Hovland represent our great University with his legendary coaching ability.”

Last competing in Akron’s Zippy Invitational from December 1-4, where both the men and women finished in the top-four, Hovland’s teams will next be in action January 13 and 14 when the IUPUI Jaguars and Youngstown State Penguins visit the Oakland Aquatic Center.

With the Golden Grizzlies hoping to send Hovland out on top and add another tally to their respective league title streaks, the 2023 Horizon League Championships are scheduled for February 15-18 at the Indiana University Natatorium on the IUPUI campus.

— The above press release was posted by Swimming World in conjunction with Oakland University Athletics. For press releases and advertising inquiries please contact Advertising@SwimmingWorld.com.