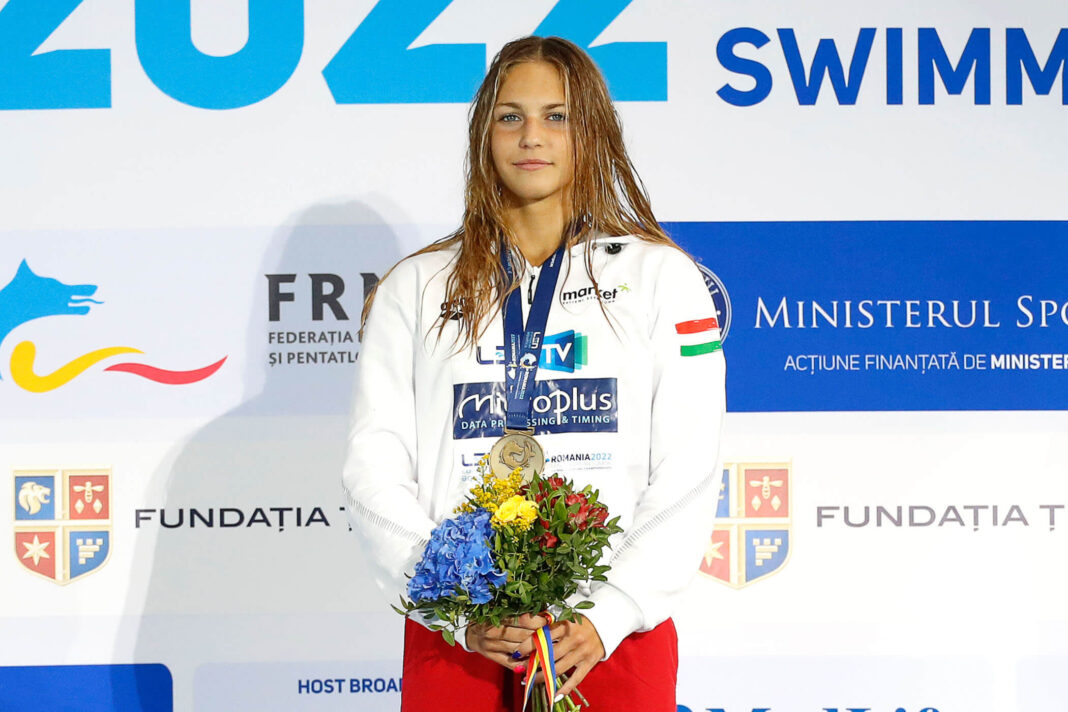 Nikoletta Padar claimed her third gold medal of the meet, Roos Vanotterdijk set a Belgian record of 57.85 in the women’s 100 fly and David Popovici went 22.17 in the 50 free semis at the European Junior Championships in Romania.

Vlad-Stefan Stancu became the second Romanian man to top the podium in solo events in Bucharest after Popovici when he won the 1500 free with his time of 15:05.47 toppling Dragos Coman‘s national mark that had stood since the 2004 Olympics.

Nina Sandrine Jazy won the women’s 50 free and Popovici was 0.05 swifter in setting the semi pace than his winning time at last year’s junior showcase.

It consigned to history Kimberley Buys‘ national standard of 57.91 from Rio 2016, a time she matched a year later at the national championships, with Vanotterdijk only the second Belgian woman inside 58.

Vanotterdijk’s time was also considerably swifter than the 58.44 in which Pudar came eighth at last month’s World Championships.

Pudar, of Bosnia and Herzegovina, touched in 57.88, 0.56 swifter than her time in the Budapest final and Julia Ullmann of Switzerland was third in 59.39.

Krzysztof Chmielewski – winner of the 200 fly – set the pace in the 1500 free final with Stancu tracking him.

The Romanian – who turns 17 next month – gradually ate into the deficit until the 1150 mark when he was just 0.16 adrift.

Triple Gold For Padar; Jazy Atop The Podium

It was her third title in two nights after she defended her 200 free title and won the mixed free on Wednesday.

There were no German women on the podium last year at the Foro Italico but this year’s meet so far indicates healthier times ahead.

Coming into the session they had already claimed two bronze medals through Julia Barth in the 1500 free and the 4×100 free relay, much down to Jazy who propelled them from fourth to third with a 54.65 anchor leg, the swiftest time in the field.

Sanberk Oktar led throughout to claim a dominant victory in the men’s 200IM, a year after fellow Turkish swimmer Berke Saka was crowned.

Popovici heads into Friday’s 50 free final in pole position and with Norbert Trandafir’s national record of 21.98 in his sights.

Trandafir, a three-time Olympian, set the record at the 2013 World Championships in Barcelona.

Zheltyakov – who doesn’t turn 17 until November – set a national record of 1:57.18 at Hungarian Nationals in April.

He also holds the Ukrainian 100 back standard of 53.98 recorded en-route to silver at last year’s edition in Rome.

Dara Molnar – who turned 16 last week – qualified first for the women’s 200 back final in 2:11.24, the Hungarian booking lane four alongside Poland’s defending champion Laura Bernat who clocked 2:11.65, the pair the only women inside 2:12.

Also through in fourth was 200 silver medallist Michal Chmielewski of Poland.

Eneli Jefimova, last year’s silver medallist, was through in fourth.

This Cuddly New Body Pillow Will Melt Away All Your Aches