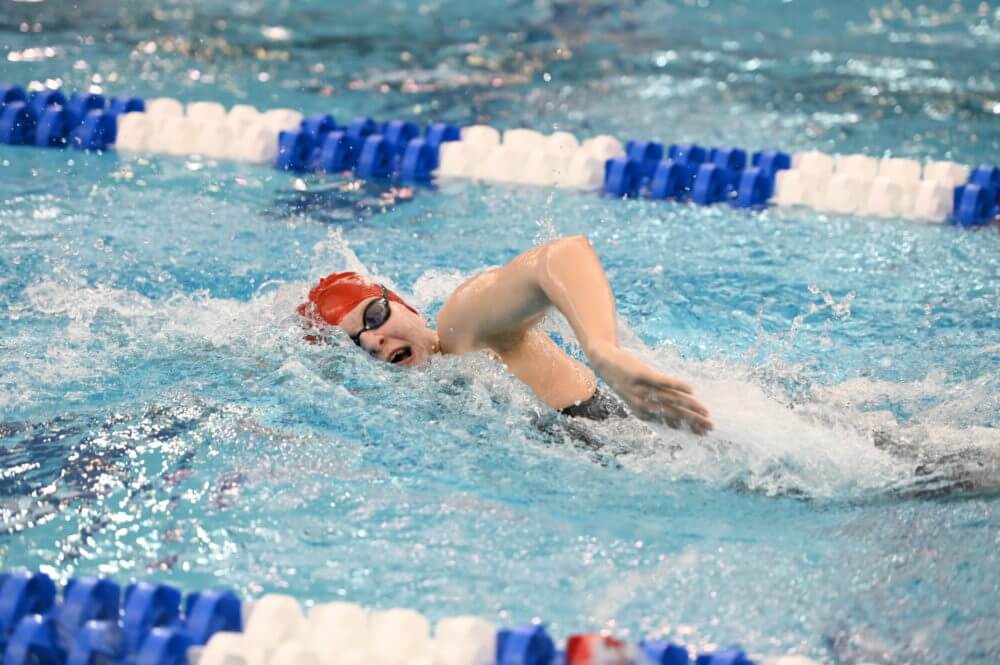 The Nebraska women’s swimming and diving team won the Hawkeye Invitational on the campus of the University of Iowa. The meet ran Thursday-Saturday.

Nebraska earned four wins in the Hawkeye Invitational and used its depth to build a lead and hang on for the win.

Maia Hall won the breaststroke with a career-best 2:13.18, moving her up to third on Nebraska’s all-time list and marking an NCAA “B” Cut. Hall finished third in the 100 breaststroke (1:01.72) on Friday at the Hawkeye Invitational.

Stott reached her second NCAA “B” Cut of the Hawkeye Invitational with a career-best 1:58.15 in the 200 butterfly. On Thursday, Stott clocked a NCAA Standard B Cut in the 500 freestyle and went on to finish second in 4:44.97.

Diver Kelsey Clairmont won the platform diving with an NCAA Zone qualifying 283.15. The freshman from Canada added a top finish on Friday, finishing third in the three-meter with a 310.60.

While the team didn’t have quite the depth of Nebraska, it was a stellar Hawkeye Invitational for runner-up Rutgers, which continues its strong season.

On Friday at the Hawkeye Invitational, Alice Scarabelli, Rachel Kimmel, Sofia Maksimova and Sofia Chichaikina broke the school record in the 200 medley relay (1:38.95). Kimmel then bested the Rutgers record in the 100 breast. She hit the wall in 1:00.65 topping the previous mark of 1:00.82 by Rachel Stoddard in 2016. Kimmel also swam in the 400 IM finals posting a season-best 4:24.53 for sixth place. Scarabelli won the 100 backstroke in 53.31.

• More on Rutgers’ surge this season

On Thursday at the Hawkeye Invitational, Murtagh raced to the third-fastest time in RU history in winning the 500 free. She won by a .25 second margin with a time of 4:44.72 to produce an NCAA B cut.

Illinois got a strong performance at the Hawkeye Invitational from freshman Sara Jass. She swam the second-fastest 200 breaststroke in Illini history (2:13.22).

Iowa freshman Scarlet Martin scored 20 points by winning the 100 butterfly with the program’s fifth-fastest time (53.84). Sophomore Makayla Hughbanks capped off the night with a career-best 355.40 total to score 20 points in the 3-meter dive finals, ranking fifth all-time in program history.

How To Make DIY Greens Powder Using an Air Fryer

How to Book a Seat With Extra Legroom