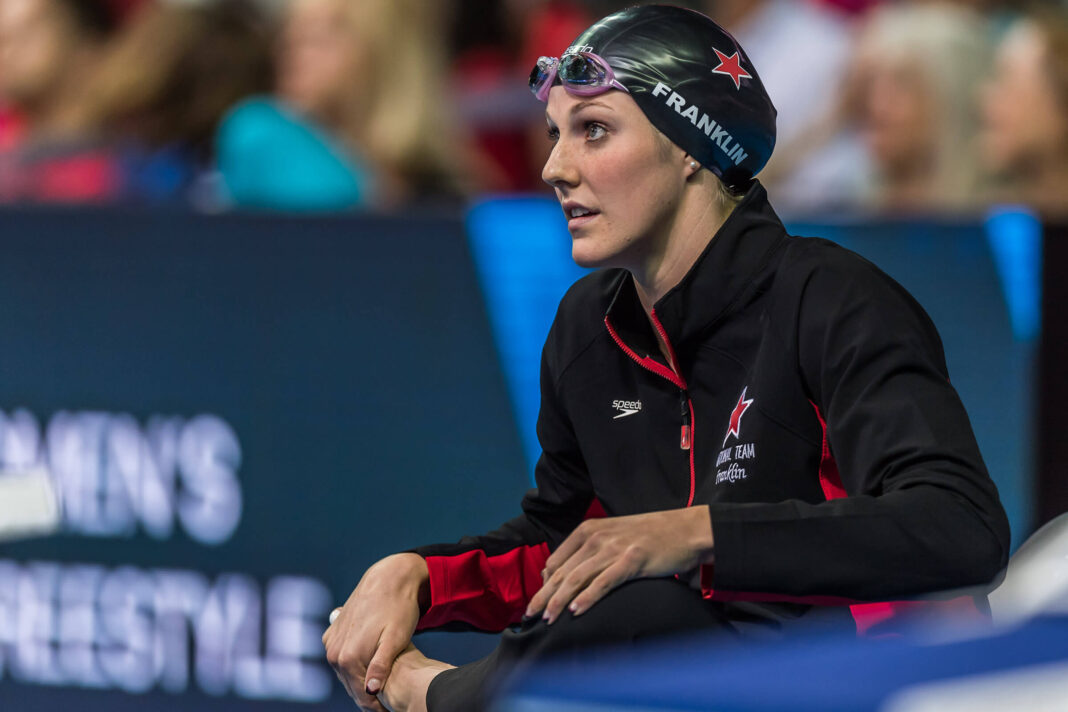 Great Races: When Missy Franklin Went to the Diving Well Ahead of Olympic Gold in 100 Backstroke

In the latest edition of Swimming World’s Great Races Series, we head back to the 2012 Olympic Games in London. It was there where American teenager Missy Franklin pulled off an epic double, capped by a gold medal in the 100-meter backstroke.

When Franklin and coach Todd Schmitz opted to tackle the incredibly challenging double of the 200 freestyle and 100 backstroke for the 2012 Olympic Games, they knew the schedule was not favorable. The timeline for the night of July 30 featured a 14-minute gap between the semifinal of the 200 free and the final of the 100 backstroke. It would be a demanding turnaround, perhaps as grueling as any in the sport’s history at the Olympic level.

To enhance medal opportunities, athletes are often compelled to scratch one event in favor of another at the Olympic Games. The tradeoff is worthwhile if it means a greater opportunity at the podium in one discipline, as opposed to misses in both events. Franklin, though, wanted to pursue the double, and she had the support of Schmitz and youthful belief that it was a manageable feat.

For Franklin, the goal heading into the semifinals of the 200 freestyle was simple: Book a lane for the final. It didn’t matter if she advanced as the third seed, or seventh. Just finish top eight. And, if possible, earn that spot by conserving a bit of energy that could prove beneficial later in the evening.

Indeed, Franklin got the job done.

Racing in the second of the two night heats, Franklin moved through her four laps in 1:57.57. That performance was good for fourth place in her semifinal, and eighth overall. Oh, there was a bit of nail-biting as Franklin touched the wall, but she ultimately finished .21 ahead of Spain’s Melanie Costa Schmid and had what she desired: A bid to the final.

The moment Franklin climbed out of the water, however, her attention had shifted. She was a quarter-hour shy of battling for the title in the 100 backstroke, and based on the way Australian Emily Seebohm looked in the first two rounds, her pursuit of a gold medal was going to be a significant challenge. More, with lactic acid built up from the 200 freestyle, it was imperative Franklin had the opportunity to regroup.

Since each minute ahead of the 100 backstroke was critical, Franklin couldn’t waste her time walking to the warmdown pool. So, she took advantage of the closest water at her disposal. As the Olympic competition continued to unfold, Franklin logged a few warmdown laps in the diving well at the Aquatic Centre. The move was granted by meet officials and can be considered nothing short of a thought of genius. After all, time was crucial, and this approach treated each second as valuable as a hundredth can be in racing conditions.

When the athletes were introduced to the London crowd for the final of the 100 backstroke, Seebohm was the favorite. Not only had she produced the fastest times of the heats and semifinals, her 58.23 mark from prelims was eye-opening. More, she was fresh.

As expected, the Aussie bolted to the lead over the first 50 meters, making the turn in 28.57, compared to the 28.82 of Franklin. Down the second length of the pool, Seebohm maintained her edge at the 75-meter mark, which is where the American’s charge started to take shape. With each stroke, Franklin chewed into Seebohm’s advantage, until she pulled even, then ahead and finally, away from her foe.

At the wall, the scoreboard flashed Franklin as the Olympic champion in an American-record time of 58.33, with Seebohm earning the silver medal in 58.68. The bronze medal went to Japan’s Aya Terakawa in 58.83. In less than a minute, Franklin had the individual Olympic title she dreamed of, and had completed a spectacular double that not only relied on her physical gifts but exhibited her guts and mental toughness.

A night later, Franklin finished fourth in the 200 freestyle, as her effort of 1:55.82 left her .01 shy of Aussie Bronte Barratt for the bronze medal. Yet, she had her Olympic crown in the backstroke, and complemented that victory with a world-record showing in the 200 backstroke later in the meet.

Simply, it was a special night.

“It’s indescribable,” Franklin said of capturing an Olympic gold medal. “I still can’t believe that happened. I don’t even know what to think. I saw my parents’ reaction on the screen and I just started bawling. I can’t even think right now.”

Click here for video of the 100-meter backstroke final