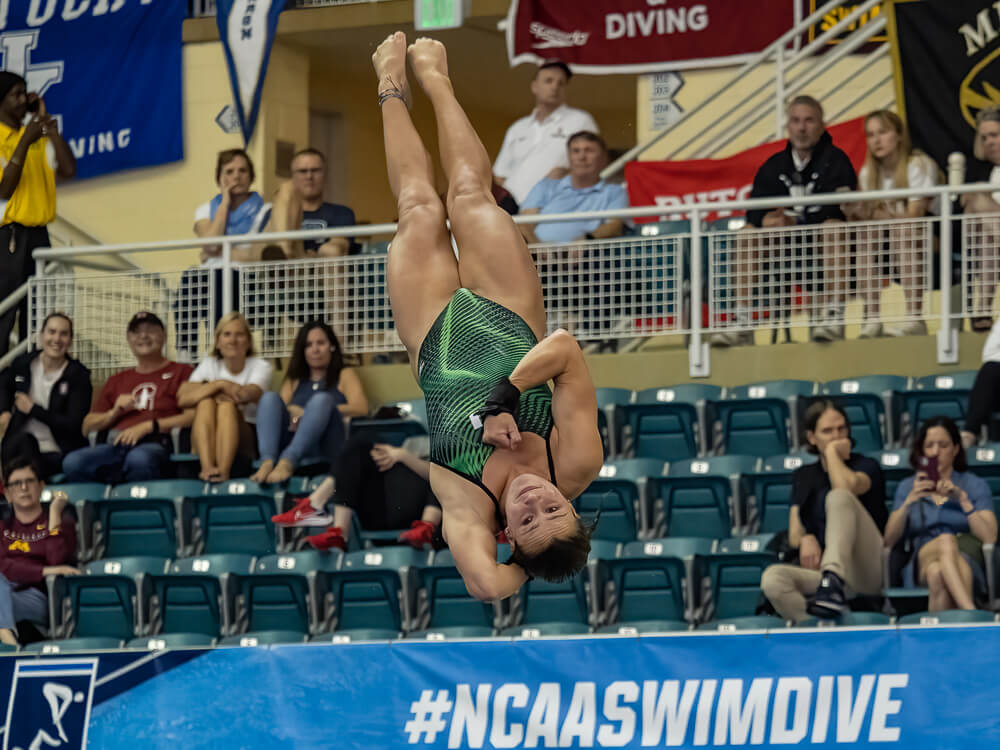 The Miami Hurricanes swimming & diving team topped Boston College in a dual meet Wednesday afternoon, emerging with an 201-92 win over the visiting Eagles.

2022 NCAA national champion Mia Vallée cruised to a win in both the 1-meter and 3-meter diving events, while several veteran swimmers led the way in between the lanes to help the Hurricanes capture the win.

Vallée, the reigning ACC Women’s Diver of the Year, won the 1-meter (374.25) and 3-meter (342.75) in dominant fashion. The Hurricanes men’s diving contingent also competed against the Eagles at the Whitten Center Pool.

The Hurricanes’ top entry in the 200-yard medley relay – comprised of Celina Kuehne, Tara Vovk, Zorry Mason and Giulia Carvalho – earned a win in 1:42.11 in the meet’s first event to set the tone for the day.

For Boston College, Sophomore Mary Kate Leonard secured a victory for the Eagles in the 200 IM with a time of 1:43.03 – dropping 33.72 seconds off of her previous time to beat the second-place finisher by over 20 seconds.

SMU moved to 4-1 on the season in dual action. The Mustangs earned a first place finish in every event of the competition.

Cole Bruns, Lance Butler, Riley Hill and Charlie Kaye started off the day by taking first place in the 200 freestyle relay, touching the wall at 1:31.27.

While the Miami women dominated, the SMU men did as well. Hill and Bruns finished back-to-back in the 100 backstroke. Hill’s time of 50.99 earned first place and Bruns’ 51.04 landed him a runner-up finish.

The Boston College men’s 400 Free Relay team of Jack Doyle, Matt Szekely, Bryce Henkel, and Charlie Clark also secured a first-place finish for the Eagles with a time of 3:08.69.

But it was the SMU men and Miami women who were victorious.

A Friend of the Family: Where Is Jan Broberg Now?