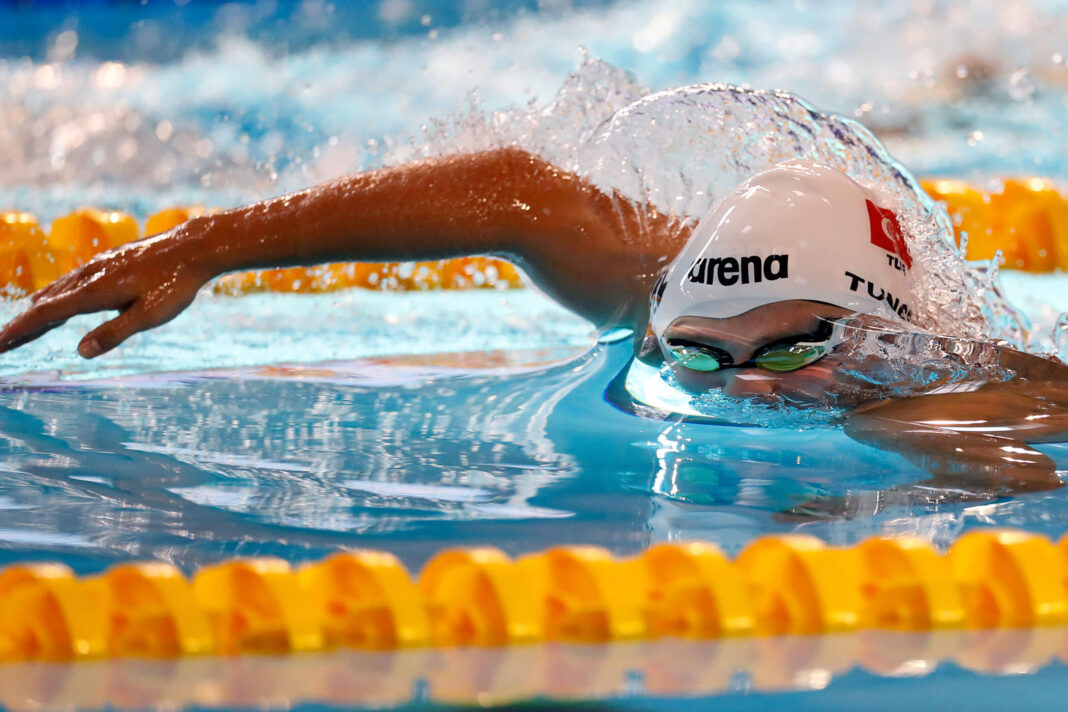 On a night when Portugal’s Diogo Matos Ribeiro captured his third gold medal of the World Junior Championships in the men’s 50 butterfly, this one in world-junior-record time, a second swimmer made it triple gold as 17-year-old Merve Tuncel, a native of Turkey, won gold in the women’s 1500 freestyle. She already won the 800 free and then 400 free, and in the 30-lap race, Tuncel had the lead from the 150-meter mark on. She ended up finishing in 16:15.95 to win gold by 8.66 seconds.

Other finals in the session included the women’s 50 backstroke, men’s 400 IM and women’s 400 freeestyle relay, while world-record holder David Popovici was in action in the first men’s event of the evening as he swam the semifinals of the men’s 100 free. Check out a full recap of night five in Lima, Peru.

Swimming in his fourth championship meet of the year after the senior World Championships, European Junior Championships and then the senior European Championships, David Popovici already has three medals in Lima, gold in the 200 free, gold in the 400 free relay and silver in the mixed 400 free relay. He will be the heavy favorite in the 100 free final after qualifying first for the final in 48.17, well off his world record of 46.86 set last month and his meet record of 47.07 set on a relay leadoff. With Diogo Matos Ribeiro scratching semifinals, Popovici was two seconds ahead of the field. The Czech Republic’s Tobias Kern took second in semis in 50.08, and Croatia’s Jere Hribar was third in 50.12.

In a tight sprint backstroke showdowm, Hungary’s Lora Fanni Komoroczy claimed gold by 0.19 over Japan’s Aimi Nagaoka, 28.51 to 28.70. Nagaoka returned to the podium after previously taking second behind another Hungarian, Dora Molnar, in the 100 back. Italy’s Sara Curtis was the bronze medalist in a time of 28.93.

A big night for Japan continued as Riku Yamaguchi followed up three medals from his female teammates with a gold of his own in the 400 IM. Poland’s Krzysztof Chmielewski had the lead through 200 meters, but he fell all the way back to fifth on the breaststroke leg as Yamaguchi took over with an exceptional breaststroke split of 1:10.84, more than a second ahead of the rest of the field. Brazil’s Stephan Steverink closed the gap slightly on the freestyle leg, but Yamaguchi still won by 2.80 seconds in 4:14.88. Steverink placed second in 4:17.68, and bronze went to Greece’s Vasileios Sofikitis in 4:19.60.

Hungary won its second women’s gold medal of the evening as Lila Minna Abraham (55.59) and Nikolett Padar (54.90) opened up a huge lead on the first two legs of the 400 free relay. Lili Gyurinovics (56.39) and Dóra Molnár (55.06) held on for gold in a time of 3:41.94, almost two seconds of the Italian team of Veronica Quaggio, Marina Cacciapuoti, Giulia Vetrano and Matilde Biagiotti, who swam a time of 3:43.78 for silver. Brazil’s Celine Bispo, Beatriz Bezerra, Sophia Coleta and Rafaela Sumida earned bronze in 3:50.13.

Earlier in the night, Japan’s Mizuki Hirai almost got under the 1:00-barrier in the night as she topped the field in the women’s 100 butterfly semifinals. Hirai swam a time of 1:00.01, while Italy’s Paola Borrelli (1:00.30) and Brazil’s Beatriz Bezerra (1:00.35) finished just behind to also earn prime lanes for the final. Turkey’s Mehlika Kuzeh Yalcin and Mexico’s Maria Fernanda Mendez Guerra tied for eight in the semis in 1:02.10, and in a swimoff later on, Yalcin comfortable won over Mendez Guerra to secure lane eight for the final, 1:01.88 to 1:03.30.

Less than a quarter-second separated the top four swimmers in the women’s 50 freestyle semis. Italy’s Matilde Biagiotti was the top swimmer with her mark of 25.36, while Romania’s Bianca-Andreea Costea finished just behind in 25.43. Italy’s Sara Curtis was third in 25.56, and Slovakia’s Lillian Slusna took fourth in 25.60.

Serbia’s Uros Zivanovic swam a time of 28.08 to lead the way in the men’s 50 breaststroke semifinal round. Zivanovic will be looking to improve on the silver medal he won earlier in the week in the 100 breast. Italy’s Alex Sabbattani (28.44) and Poland’s Filip Urbanski (28.55) qualified second and third, respectively, while 100 breast gold medalist and 200 breast runnerup Luka Mladenovic of Austria placed fourth in 28.59.

How to Stream the FIFA World Cup

Stay tight, but not too tight

The Gemmell Clan Is Uniquely Talented