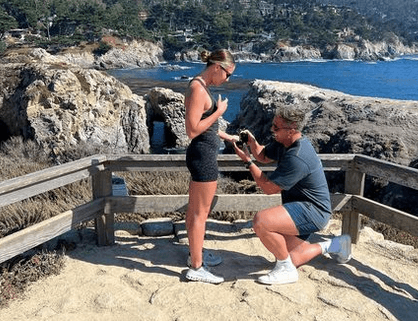 One of swimming’s most recognized couples, Mallory Comerford and Clarke Burckle officially became engaged on Sunday.

Comerford posted it on Instagram with a caption of simply: “Forever & ever.”

The couple has been together for multiple years and is a rare swimming couple of champions.

Comerford was an NCAA champion three times in the 200 freestyle and once in the 100 freestyle, winning both events as a senior at Louisville.

Burckle was an NCAA champion in the 200 breaststroke in 2010 for Arizona.

Both swimmers have had considerable success in international swimming as well.

Mallory Comerford also has been a member of the U.S. national team, winning the gold medal at the 2017 World Championships in five different relays in Budapest

One year later, Comerfored won five gold medals, three silver and one bronze at the 2018 World Championships in Hangzhou, China.

In 2019, Comerford won gold at the World Championships in the mixed 4×100 freestyle relay.

Comerford continues to swim and is on the national team, qualifying for a relay spot at the 2022 World Championships, while Burckle has retired from competitive swimming.

P.T. Vinh Pham Gear and Guide For a Healthy Body