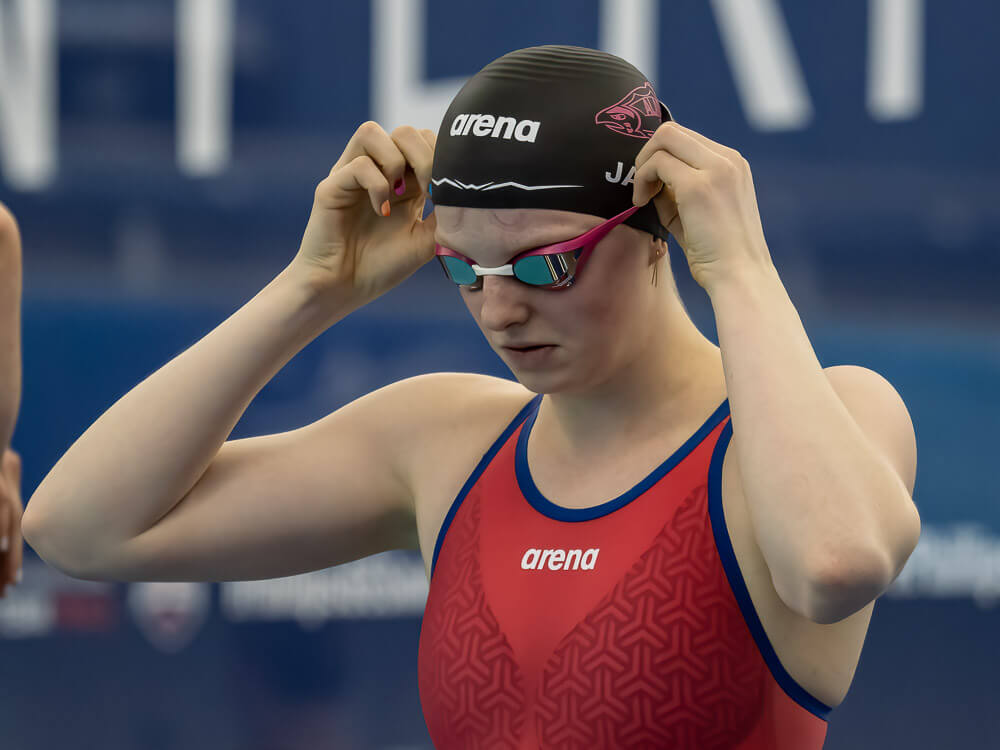 During a Friday evening of Junior Nationals loaded with National Age Group record, an individual Olympic champion somehow flew under the radar. Lydia Jacoby, a freshman at the University of Texas still eligible for Junior Nationals at age 18, raced the 100-yard breaststroke and emerged with an easy victory. Jacoby swam a mark of 57.76, which fell just short of the 17-18 National Age Group record of 57.54 she set at last week’s Minnesota Invitational.

By the halfway point of the race, Jacoby was already a second clear of her closest competition, and she ended up winning by almost two seconds. Bellevue’s Piper Enge ended up taking second in 59.61, just ahead of Crow Canyon’s Raya Mellott (59.74).

In other events, Katie Grimes became the fourth-fastest performer in history in the girls 400 IM, and Sandpipers teammate Bella Sims won a pair of titles while Maximus Williamson knocked off a Michael Phelps National Age Group record in the boys’ 400 IM on his way to three victories in the session.

The Sandpipers of Nevada returned to finish out the night in the 200 free relay, and the team of Sims, Grimes, Macky Hodges and Claire Weinstein ended up tying with Mission Viejo’s Teia Salvino, Asia Kozan, Gracyn Aquino and Teagan O’Dell in 1:29.35. Sims led off for the Sandpipers in 22.15 while O’Dell anchored for Mission Viejo in 21.96. Nitro’s Aliana Marakovic, Trinity Hoang, Avery Mehok and Ella Mongenel took third in 1:31.54.

Nitro’s Sonny Wang, Jeremy Kelly, Oliver Rowe and Kelson Flynn won the boys’ 200 free relay in 1:19.87 with three of the swimmers splitting under 20. Lakeside finished second in 1:20.18 with River Paulk, Williamson, Max Hatcher and Cooper Lucas, and Rose Bowl’s Rex Maurer, Jonathan Gim, Nathan Kim and Athan Boutakidis took third in 1:20.23. In his fourth race of the evening, Williamson posted the fastest split of the race with his 19.46.