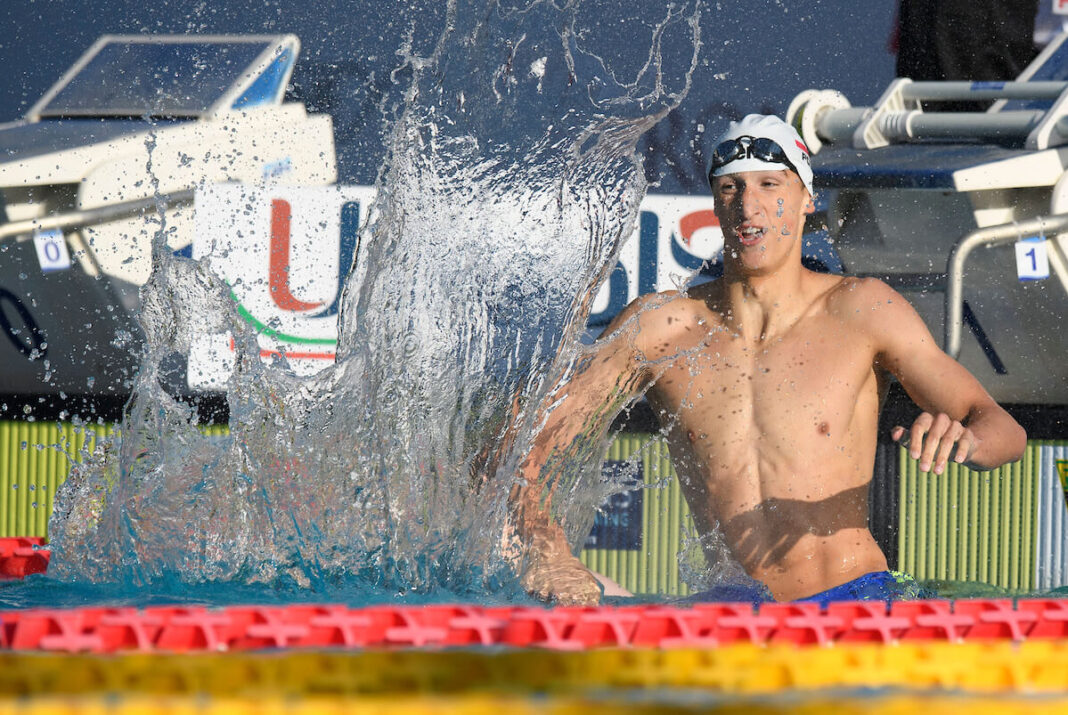 For the second consecutive sprint backstroke race at the FINA World Junior Championships in Lima, Peru, Poland’s Ksawery Masiuk is a gold medalist. The Polish teenager who won a bronze medal in the 50 back at the senior-level World Championships in June came out on top in a showdown with South Africa’s Pieter Coetzee in the same one-lap race Friday evening by 0.17. Previously, Masiuk had edged out Coetzee by just eight hundredths in a tight 100 backstroke showdown.

In the 50 back final, Masiuk posted a mark of 24.44, five hundredths quicker than his medal-winning mark from Budapest, and he beat Coetzee’s championship record of 24.58 set in the semifinals. Coetzee earned his second individual silver medal of the week in 24.61, while the Czech Republic’s Miroslaw Knedla earned bronze in 25.18, also matching his place from the 100 back two days earlier.

In other races, Masiuk’s Polish teammate Karolina Piechowicz added gold in the women’s 100 breaststroke to her earlier triumph in the 50 breast, and Turkey’s Merve Tuncel won the women’s 400 freestyle after her earlier dominant performance in the 800 free. On the men’s side, Portugal’s Diogo Matos Ribeiro won gold in the 50 freestyle to add to his earlier win in the 100 butterfly, and at the end of the session, Japan’s Mito Narita completed a sweep of the women’s individual medley events. A full recap of the session is available below.

Hungary’s Lora Fanni Komoroczy was the top seed by a large margin in the women’s sprint backstroke event, with her time of 28.48 out-pacing Italy’s Sara Curtis by more than a half-second. Japan’s Aimi Nagaoka, already the silver medalist in the 100 back in Lima, took third in the semis in 29.14, while her 100 back bronze-medal-winning teammate Chiaki Yamamoto qualified fifth in 29.31.

Japan won its first men’s gold medal of the week as Asahi Kawashima won a showdown with the man who already won gold in the 100 breaststroke, Austria’s Luka Mladenovic. Kawashima caught Mladenovic on the second length of the race, but the two were within mere tenths of each other for the rest of the event. Mladenovic closed in on the third 50, but Kawashima reasserted himself on the way home to claim gold in 2:12.61, three tenths of Mladenovic’s 2:12.94. Hong Kong’s Sai Ting Mak scored the bronze in 2:13.90.

Croatia’s Jana Pavalic pulled away to capture gold in the women’s 50 butterfly. She touched in 26.38 to win by almost three tenths over Beatriz Bezerra of Brazil, who clocked a time of 26.67. Third went to Slovakia’s Lillian Slusna in 27.04.

Poland’s Karolina Piechowicz did the work on the first length to open up a lead in the 100 breaststroke final, and she held on to win gold at the finish. Piechowicz, who previously won gold in the 50 breast and as part of Poland’s mixed 400 medley relay (along with Masiuk), was out in 31.78, more than three tenths ahead of the field, and strong finishes from Italy’s Irene Mati and Serbia’s Martina Bukvic were not enough to catch the swimmer from Poland. Piechowicz touched in 1:08.73, while Mati earned silver in 1:08.94. Bukvic won bronze in 1:09.27.

The top three finishers from the men’s 100 butterfly led the way in the semis of the 50-meter race, although they finished in a different order. The Czech Republic’s Daniel Gracik was comfortably first with a mark of 23.53, while Denmark’s Casper Puggaard was next best at 23.87. Portugal’s Diogo Matos Ribeiro, who won 100 fly gold ahead of Gracik and Puggaard, finished third in 23.94.

After winning gold by more than six-and-a-half seconds in the 800 free, Turkey’s Merve Tuncel led for almost the entire race in the400 free final, although this one was much closer as she didn’t build a full second on the field until the 300-meter mark. Tuncel clocked a time of 4:10.29 to take the win, while the most epic battle of the race came down to Japan’s Ruka Takezawa and Italy’s Giulia Vetrano going head-to-head for silver. Vetrano was ahead with 50 meters to go before a powerful finish from Takezawa got her to the wall three hundredths ahead of her Italian rival, 4:11.83 to 4:11.86.

Portugal’s Diogo Matos Ribeiro clobbered the field in the men’s splash-and-dash for his second gold medal of the week. He stormed to a time of 21.92, almost six tenths ahead of the rest of the field, despite having swum in the 50 fly semis mere minutes earlier. Matos’ gold was his second of the week after winning the 100 fly by nearly a half-second as well. The silver medal here went to Cyprus’ Nikolas Antoniou, who touched out Croatia’s Jere Hribar, 22.51 to 22.55.

Japan’s Mio Narita went wire-to-wire in the women’s 200 IM final, posting an elite time of 2:11.68 to claim gold. The swim made Narita the fifth swimmer of the night to make it two individual golds in Lima after she posted a championship-record mark of 4:37.78 earlier in the meet in a six-second victory in the 400 IM. The silver medal here went to Hungary’s Lilla Minna Abraham (who was previously the runnerup in the 400 IM). Abraham swam a time of 2:13.45, and bronze went to Spain’s Emma Carrasco Cadens in 2:13.74.

Poland claimed bronze in 7:19.93. Kwasery Masiuk, the winner in the 50 backstroke earlier in the night, led off in 1:48.93, the quickest leadoff in the race, and he was followed by Krzysztof Matuszewski, Adam Zdybel and Jakub Walker on the way to a final time of 7:19.93. Walker helped Poland slip by the Brazilian team on the final leg, and Brazil settled for fourth in 7:20.13.

6 Healthy Food SWAPS // SNACKS – Eat This, Not That