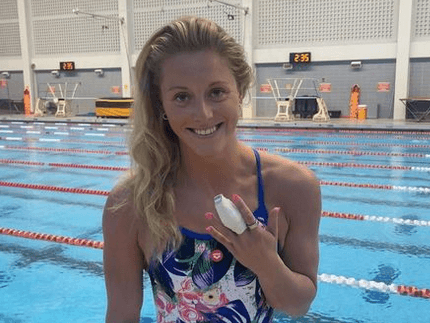 Kira Toussaint has pulled out of the FINA World Cup Berlin stop with an injured finger.

The swimming star from the Netherlands posted a picture of herself with her middle finger in a splint and bandage on Tuesday.

“Bad news. Last Friday I got an avulsion fracture in my left middle finger. Luckily it isn’t too bad, but I have to be very careful and have to pull out of the World Cup in Berlin. It happened during practice with a backstroke finish. Nothing wrong with my current speed,” Kira Toussaint posted.

The FINA World Cup has multiple stops, including Toronto and Indianapolis. Kira Toussaint’s status for those events are to be determined.

Toussaint recently returned to Tennessee, where she went to college, to train for the upcoming Paris Olympics in 2024. She also is a volunteer assistant with the team.

Toussaint has established herself as one of the world’s elite backstrokers in the 50 and 100 distances, and formerly held the world record in the short-course version of the 50 backstroke. The Dutch record-holder in the 50 backstroke and 100 backstroke, Kira Toussaint won the bronze medal in the 100 back at this summer’s European Championships, where she also helped the Netherlands to the gold medal in the 400 medley relay.

“So happy to be back training on Rocky Top getting ready for the Paris 2024 Olympic Games!!,” Toussaint wrote. “While I’m here I have the amazing opportunity to be one of the VOLunteer assistant coaches.”

Who Is Chris Evans Dating?

The Right Way To Handle Onboarding and Reboarding