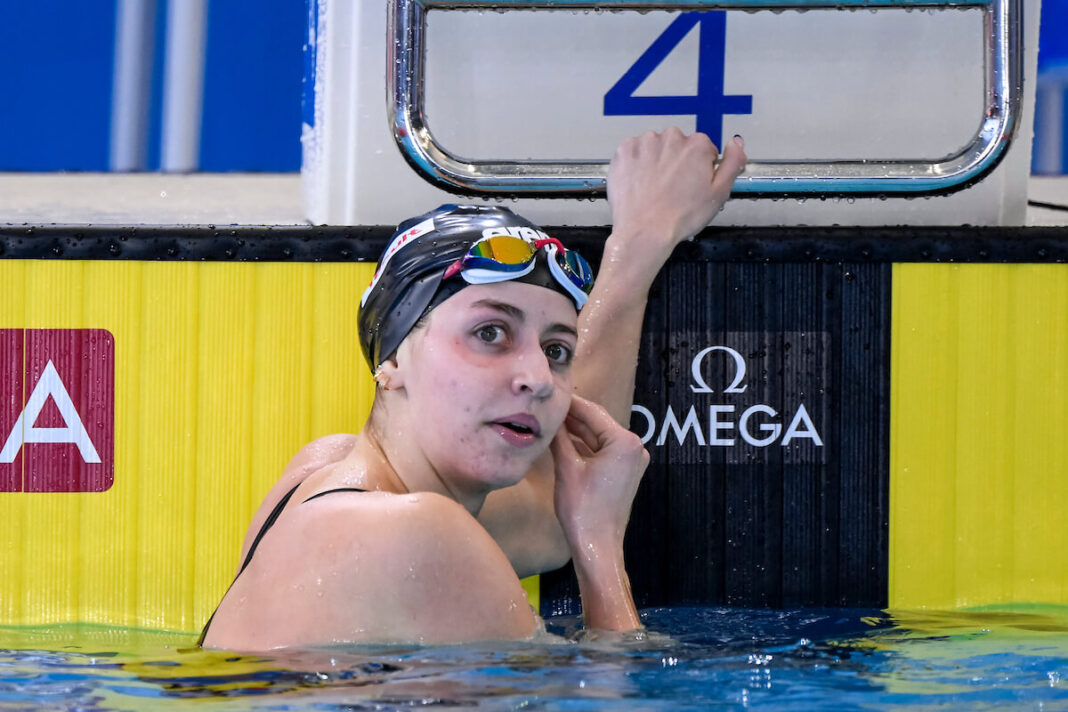 Early on during her junior year at the University of Virginia, Kate Douglass told Cavaliers head coach Todd DeSorbo that she wanted to break American records in the 50-yard freestyle and 200-yard breaststroke. Given Douglass’ history, it was not a terribly unreasonable goal: in addition to her Olympic bronze medal in the 200-meter IM, she had won the NCAA title the previous season in the 50 free while recording several quick 200 breast performances in-season.

But Douglass was one-of-a-kind: no swimmer in history had ever achieved records in that pairing of events, two races requiring as separate skill sets as any in the sport. So this would be an unlikely challenge and one for swimming’s history books — and Douglass pulled it off during a brilliant performance at the NCAA Championships in March.

Douglass actually set three American records in three different strokes at the meet: in the 50 freestyle, 100 butterfly and 200 breaststroke, and she swam either leadoff or anchor on four national-title winning relays. Most impressive was on the final day of the meet when she lowered the 200 breast record set four years earlier by the swimming considered the country’s top breaststroker, Lilly King.

In the final, Douglass was a few tenths off record pace as she battled Texas’ Anna Elendt over the first 100 yards, but she began pulling away at that point. At the 150-yard mark, she snuck under King’s pace by two hundredths, and she built that gap over the final 50. She touched in 2:02.19, four tenths faster than King’s mark from 2018 that previously stood as the American, NCAA and U.S. Open record.

“To do it here, to do it against the competition she was doing it against, and then to race a lot of rivals in the 200 breaststroke and break Lilly King’s record — Lilly’s arguably the greatest breaststroker ever — it’s pretty incredible to see her do something like that,” Douglass said that night.

The performance made Douglass the first swimmer to hold American records in three different strokes since Natalie Coughlin. Additionally, no swimmer before Douglass had ever won a national title in the 200 breaststroke after also winning either the 50 free or the 100 fly at the NCAA Championships.

After setting that record on the college level, Douglass took her breaststroke skills to meters. At the U.S. International Team Trials, Douglass raced Olympic silver medalist King and bronze medalist Annie Lazor in the 200-meter breast and finished second, and at the ensuing World Championships, she earned a bronze medal. At the end of the year, Douglass became world champion in the short course meters 200 breast.

However, she still had more to show in the college ranks, and as her senior season at Virginia reached its halfway point, Douglass lowered her own American record in the event to 2:01.87 at the Tennessee Invitational. Perhaps she will have another big drop as she progresses through the rest of the season, but for now, Douglass deserves significant props for branching out from her already-busy program of sprint free, fly and IM to take on the 200 breast and becoming the fastest yards swimmer ever.

Why Tyrell Malacia is PERFECT for Ten Hag's Man Utd…