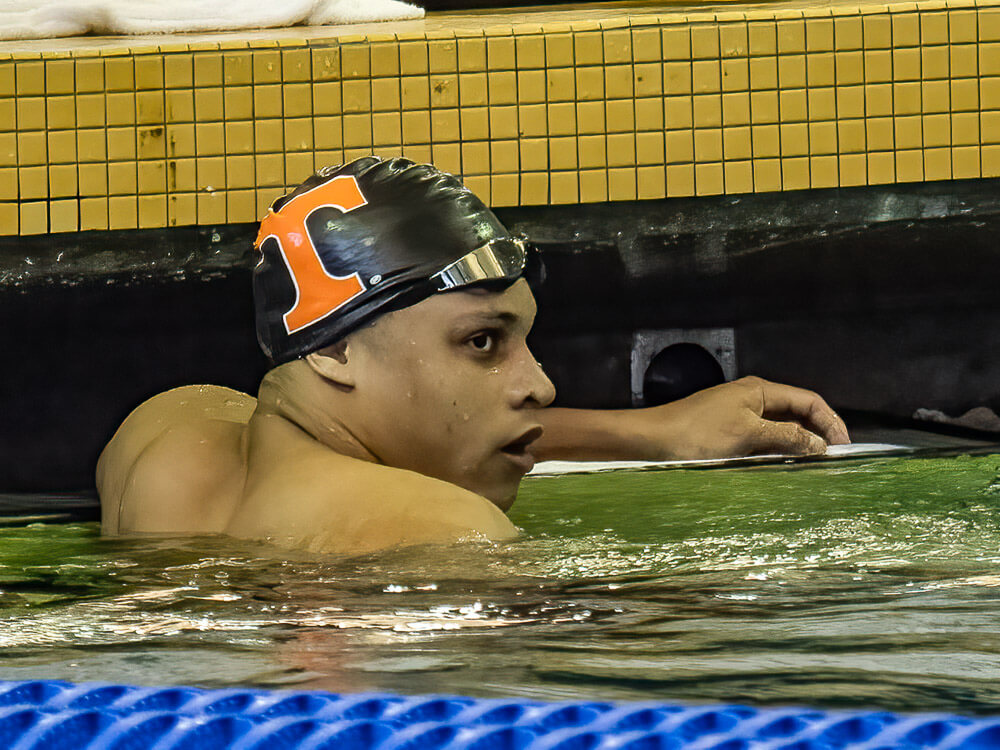 The Jordan Crooks show continued for another night in Knoxville, Tenn., as the Volunteers sophomore swam the fastest time in the country in yet another event after Thursday’s show in the 50 freestyle, while the Virginia women won four out of five individual events on the night. Stars Kate Douglass, Alex Walsh and Gretchen Walsh all posted victories, but it was Ella Nelson who recorded the only No. 1 time in the nation out of the bunch.

There was controversy in the first event of the night as Virginia’s team of Gretchen Walsh, Alex Walsh, Lexi Cuomo and Kate Douglass was disqualified in the 200 medley relay for an apparent 15-meter violation on the start from Cuomo. The Cavaliers’ time of 1:32.50 was by far the quickest in the nation and just seven tenths off the American and NCAA records they set in February, but it did not count.

Instead, it was North Carolina edging out Virginia’s B-team for the win with Greer Pattison, Skyler Smith, Grace Countie and Olivia Nel combining for a time of 1:36.04. Countie split 23.49, and Nel came home in 21.33 to put the Tar Heels over the top. Virginia’s Carly Novelline, Jaycee Yegher, Abby Harter and Maxine Parker finished in 1:36.45, while Michigan claimed third in 1:37.49.

Jordan Crooks and Gui Caribe picked up where they left off Thursday as they turned a two-tenths deficit at the halfway point into a seven-tenths win in the 200 medley relay. Crooks split 19.87 on the fly leg, and Caribe came home in 18.69, and together with Nick Simons and Michael Houlie, they swam a time of 1:23.84.

Virginia had the lead at the halfway point before falling back, but Matt Brownstead, Noah Nichols, Matt King and August Lamb still combined for a mark of 1:24.53 to take second. Michigan’s Wyatt Davis, Brendan Fitzpatrick, Gal Cohen Groumi and Bence Szabados placed third in 1:24.90.

In prelims, American-record holder Kate Douglass finished just ahead of Virginia teammate Gretchen Walsh in the event, 49.76 to 49.89. Walsh opted to skip the final to focus on the 100 back, and Douglass cruised to a win in 49.84. She beat the field by more than two seconds with North Carolina’s Ellie Vannote placed second (51.83) and Tennessee’s Sara Stotler took third (52.58).

After moving into a tie for second all-time in the 50 free Thursday, Jordan Crooks exploded in the 100 fly Friday. He got under 45 for the first time in prelims with his time of 44.82, and he went slightly quicker with a 44.79 at night. The time is the fastest in the country so far this season, although it is worth noting that it took 44.78 just to qualify for the A-final in an incredibly deep 100 fly at last year’s NCAA Championships. Then again, Crooks was 26th in the event in March, so he has already posted a huge jump.

In two NCAA Championships appearances in her career, Ella Nelson has placed second in the 400 IM in 2021 and third in 2022, but she currently holds the top mark in the country. Nelson dominated the event by more than 7.5 seconds here, and she recorded a time of 4:03.61. The senior from Nashville has been as quick as 4:02.33 in her career, but this mark leads the current national rankings by more than two seconds. Alex Walsh, the NCAA titlist in this event last year and Nelson’s teammate at Virginia, skipped the event here. Michigan’s Kathryn Ackerman placed second in 4:11.22, and Virginia’s Sophia Wilson took third (4:12.67).

Tennessee’s Landon Driggers won this race by more than three seconds. He did not even race at the NCAA Championships as a freshman, but he currently sits a top-five time in the country with his mark of 3:41.06. The only swimmers to swim faster this year are Leon Marchand, Texas’ Carson Foster, Georgia’s Ian Grum and Florida’s Kevin Vargas. Driggers was just 1.57 second ahead of the field with 100 yards to go, but he expanded the lead to more than three seconds on freestyle. Michigan’s Jared Daigle took second (3:44.31), and North Carolina’s Patrick Hussey placed third (3:45.24).

In an exciting finish, Tennessee’s Brooklyn Douthwright held off a charging Katie Crom of Michigan to take the win. Crom was more a second behind Douthwright after 150 yards, but her brilliant 25.94 closing split brought her nearly level with Douthwright, but it was not quite enough. Douthwright won in 1:44.78 with Crom second in 1:44.89 as both joined a crowded club of 1:44 swimmers. Virginia’s Maxine Parker, the leader through 100 yards and still in the mix with two lengths to go, faded to third in 1:45.49.

In an extremely tight finish in which less than a half-second separated the top four swimmers, Tennessee’s Joaquin Vargas held on to win in 1:34.49, holding off North Carolina’s Tomas Sungaila by just 0.14 on the final 50. Sungaila placed second in 1:34.63, while another Tar Heel, Louis Dramm, touched out Tennessee’s Will Jackson for third, 1:34.95 to 1:34.97.

Alex Walsh and Kate Douglass are versatile superstars, clearly established among the best swimmers in the country, but the 100 breaststroke is not considered a signature event for either. Sure, Douglass broke the American record in the 200-yard breast last year before taking bronze in the long course version of the event at World Championships, while Walsh ranks third all-time over 200 yards, but in the 100-yard event? Not so much. But both made an appearance at the Tennessee meet, and Walsh held off Douglass to take the win, 57.94 to 58.14.

With that swim, Walsh joined reigning NCAA champion Kaitlyn Dobler of USC as the only sub-58 swimmers in the country this season. The duo beat out a swimmer who was an Olympic finalist in the 100-meter breast and the fourth-place finisher in yards at NCAAs last year, Tennessee’s Mona McSharry, and she touched third in 58.45.

Virginia picked up its first win of the meet in a men’s event as Noah Nichols came from behind to overtake a pair of Tennessee fifth-year swimmers, Jarel Dillard and Michael Houlie. Nichols popped a time of 51.82, the third-best time nationally behind a pair of swimmers competing a few hours’ drive south in Athens, Ga., Auburn’s Reid Mikuta (51.14) and Florida’s Julian Smith (51.76). Dillard placed second in 52.10, and Houlie was third in 52.15.

Virginia’s Gretchen Walsh ranks second all-time in the 100-yard back, largely by virtue of her powerful sprint speed and impressive underwater dolphin kick work. In Knoxville, she won the race by one-and-a-half seconds but fell one hundredth short of the top time nationally. Walsh touched in 50.13, just off the 50.12 that Claire Curzan swam just minutes earlier in Greensboro. Walsh finished well ahead of the field as Tennessee’s Josephine Fuller touched second (51.81) and North Carolina’s Greer Pattison took third (51.97).

Tennessee’s men finished 1-2 in the 100 back as Harrison Lierz held off a quick finish from teammate Bjorn Kammann. Lierz touched in 46.28, while Kammann edged out Michigan’s Wyatt Davis for second, 46.42 to 46.47.

Another men’s relay meant another win for the host Tennessee Volunteers. Jordan Crooks returned to action for his third race of the night, and the sprint star led off in 1:34.30. Teammates Will Jackson, Aleksey Tarasenko and Joaquin Vargas joined him to swim a time of 6:17.27. Michigan’s Gal Cohen Groumi, Eduardo Moraes, Jared Daigle and Eitan Ben-Shitrit claimed second in 6:19.95. and third went to North Carolina’s team of Patrick Hussey, Tomas Sungaila, Noah Rutberg and Louis Dramm in 6:20.18.

These $9 Satin Pillowcases Are Saving My Damaged Hair