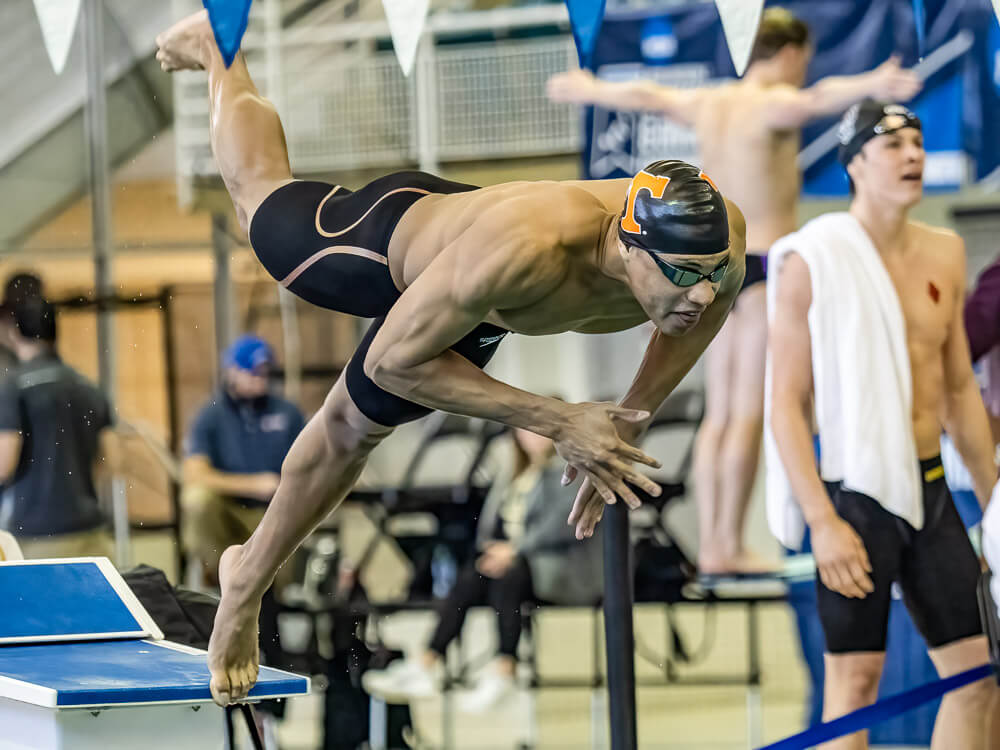 The Volunteers swept the men’s categories, with Crooks, diver Bryden Hattie and freshman Gui Caribe, who shared the honors with Baylor Nelson of Texas A&M. Kentucky’s Kyndal Knight is the diver of the week, with South Carolina’s Amy Riordan as the freshman of the week.

Crooks was outstanding at the Tennessee Invitational. The sophomore from the Cayman Islands tallied eight wins – three individual and three relays. He set program records in the 50 freestyle (18.27 seconds) and 100 butterfly (44.79). Those two and his 41.29 in the 100 free are nation-leading times this season. Tennessee’s 200 free, 400 free and 400 medley relays all set school records. The 400 free is the fastest in the country this season, 200 free the second-fastest.

MacNeil did much the same at the Art Adamson Invitational. The Tigers’ Canadian Olympic gold medalist won the 50 free in 21.03, the 100 fly in 49.40 and the 100 back in 50.70. Those times are second, second and third, respectively, in the nation this season.

Knight swept the springboard events at the Ohio State Invitational. The Wildcats’ fifth-year scored 329.25 to best the field on 1-meter and 382.30 on 3-meter, the latter a school record. He added a runner-up result on platform with a tally of 314.45. All three scores are season-bests.

Caribe went 41.44 in the 100 free as the runner-up to Crooks and the second-fastest time in the nation this season. It’s also the second-best time ever by a freshman in NCAA history. His time of 18.91 in the 50 free is third in the country. The Brazilian was part of four winning relays that placed in the top seven nationally, including a nation’s best 400 free relay on which he split 41.55.

Nelson picked up two wins in home water at the Adamson Invite, including an NCAA A cut of 3:38.39 in the 400 individual medley. That’s the second-fastest time in the nation this season. He won the 200 IM in 1:41.83, the seventh-fastest time in history, and anchored a 200 medley relay that won gold and posted the second-best time in Aggies history.

Riordan starred at the Gamecock Invitational, where she won the 500 free. Her time of 4:45.97 is fourth in program history. She was also the runner-up in the 200 free and took part in the winning 400 free relay that set the second-best time in program history.