Ilya Kharun Has a Canadian Premiere at Worlds to Flip For 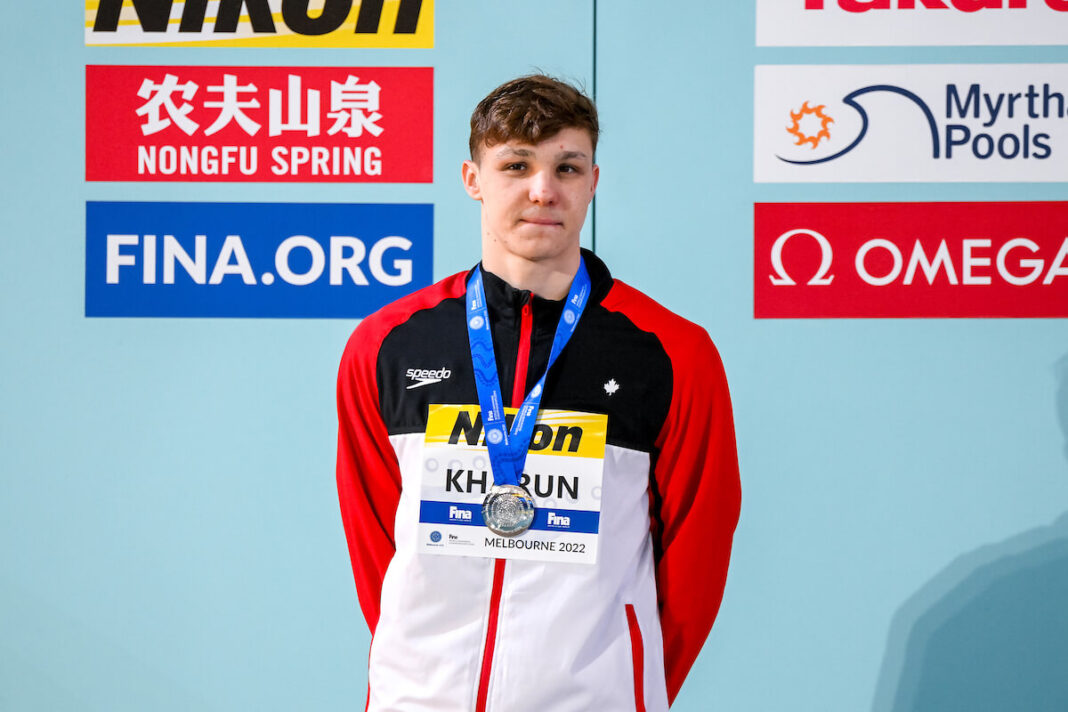 Ilya Kharun Has a Canadian Premiere at Worlds to Flip For

Ilya Kharun’s 2022 season was headed in a much different direction in the middle of the summer.

At that point, the long-time member of Sandpipers of Nevada was ticketed for the American roster for the Junior Pan Pacific Championships in Hawaii in August. Already the owner of a 15-16 national age-group record, Kharun was one of the rising talents on the boys side of the American talent pool.

But when it came time to submit paperwork, Kharun and his family realized that the only passport they held for him was Canadian. He was born in Montreal, where his parents worked as acrobats for Cirque du Soleil, founded in the province of Quebec in 1984 before growing into a global entertainment brand. In time, Kharun’s parents would move to Las Vegas to perform, raising Ilya in the city and watching him blossom into a swimmer of national attention.

The switch came as something of a surprise to Kharun. (As part of it, Luca Urlando’s 100 fly SCY NAG record was restored, for one.) But once the formalities were out of the way and he connected with Swimming Canada, he jumped in with two feet, a process he decides as not really a decision that had to be made but just the reality of the situation.

“I always raced in the United States so I thought I was going to be part of it,” Kharun told Swimming World from Melbourne, just after the conclusion of the FINA World Short-Course Championships. “I had no idea you needed a whole process of, oh you needed a passport to represent. I always thought, oh you race in the U.S. so you represent them.”

The early returns of Kharun’s Canadian career are nothing short of exemplary. He’s leaving Melbourne with quite the haul: Three Canadian records, two world junior records and a pair of medals, bronze in the mixed 200 medley relay and silver in the 100 butterfly.

For sheer dramatic value, the latter swim was the show-stopper. Kharun had already assembled a stellar meet heading into the final day in Melbourne, but his rally in the 100 fly was outstanding. He was eighth at the first three walls, then roared home in the final 25 meters. When the wash settled, he leapt into the silver medal spot in 49.03 seconds. He axed a clean half-second off the world junior record, which had held at 49.53 since 2017 in the hands of China’s Li Zuhaho. And he ascended the podium a step below Chad le Clos – the South African who won his first Worlds gold medal in 2010 in Dubai, two months before Kharun’s sixth birthday.

“The race was amazing,” Kharun said. “Being on the same podium with those guys was a really thrilling experience, because I didn’t even know – I was hoping to get to that place, but when I touched the wall and saw that I was second, I was like, oh my god. It was really, really fun.”

Even without that grand finale, Kharun made an outstanding impression in Melbourne. His first swim was a world junior record in the 50 fly, going 22.32 to clip two hundredths of Andrei Minakov’s mark from 2020. He would nudge that down to 22.28 in both semifinals and a swim-off that landed him ninth. The time is a national record.

He followed with eighth place in the 200 fly, his 1:50.86 also a national record. In between, he added bronze in the mixed 200 medley relay, setting up his grandstand finish.

“Before the meet, I was just kind of doing my thing, getting ready for it,” Kharun said. “Overall, it was an amazing experience and I was really glad to be in it. It was a really fun experience.”

A senior in high school, Kharun has committed to Arizona State, where he’ll join quite the training group preparing for the Paris Olympics. The addition of Kharun – with Josh Liendo as a premier sprinter, plus a solid fall from Javier Acevedo that has yielded national marks and the continued growth of Ruslan Gaziev in the college realm – makes the Canadians relay medal contenders, even if breaststroke remains a limiting factor in the medley measuring.  (Acevedo joined Kharun, Kylie Masse and Maggie MacNeil on the winning relay, though with Acevedo swimming breast, not his best stroke.)

Kharun finds himself at the nexus of two programs growing rapidly. Sandpipers has become one of the top clubs in the United States. Canada, on the back of a wholesale rewriting of its record books, finished fourth in the medal table, in golds (three) and total medals (14). Kharun is just excited to be a member of the cast.

“What Sandpipers is doing right now is amazing,” he said. “I saw the results from Juniors, really proud of those guys, and the people in Canada have been really nice. They’re also performing really great, like what you saw with the world record for Maggie. Being in the middle of all that, it’s really just an experience to go through it.”