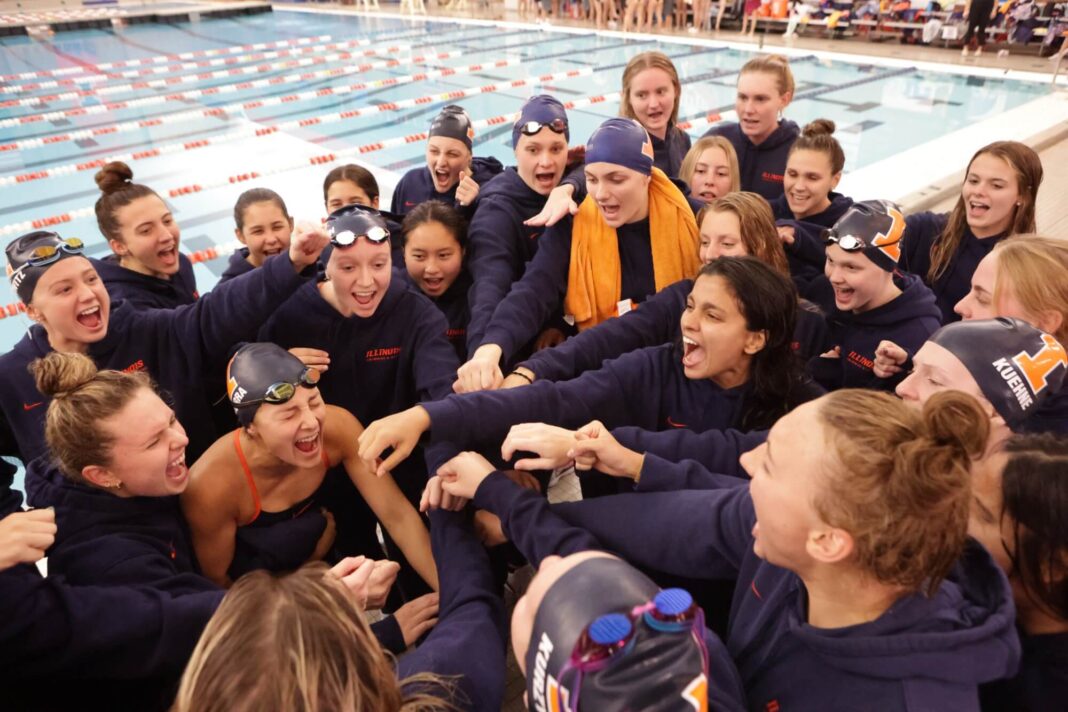 “I was really excited with the way the girls performed today,” said Illinois swimming coach Jeana Kempe. “We had 39 season-best times and a lot of event wins. Southern Illinois is a really good program. They had two NCAA qualifiers last year and that’s hard to beat in a dual meet. I told them if we were going to win this meet it was going to be a total team effort. From the beginning of the meet, they took control and it was really awesome to watch.”

Plenty of first place finishes came between the lanes for Illinois swimming. Freshman Liv Dorshorst kicked it off with a first-place finish in the 1000 freestyle (10:11.41) a new personal-best. Senior Jeanri Buys claimed second in the same event with a new personal-best as well (10:29.63). In the 200 free sophomore Sydney Stoll and junior Cara Bognar finished first (1:52.93) and second (1:53.69) respectively.

Illini freshman Alexis Wendel was not to be outdone; she earned the number one spot in the 100 butterfly (57.01). The rarest event of the day was the 200 IM, there was a tie between two Illinois swimmers for the top mark. Sydney Stoll and freshman Sara Jass both clocked in at exactly (2:05.45).

“The divers have taken a couple of hits this week with a few being sick and recovering,” said head diving coach Tricia Grant. “After the warm up the pulled it together and came out of nowhere and took second on both boards which is huge.  They have had a hell of a week; I’ve been pushing them in our workouts and they rise to the challenge. It’s really great to see.:

Yang Face Brings Gua Sha Tools Back to Their Roots

Lightness of Being: Levitate with Regina Santos – Class 5160