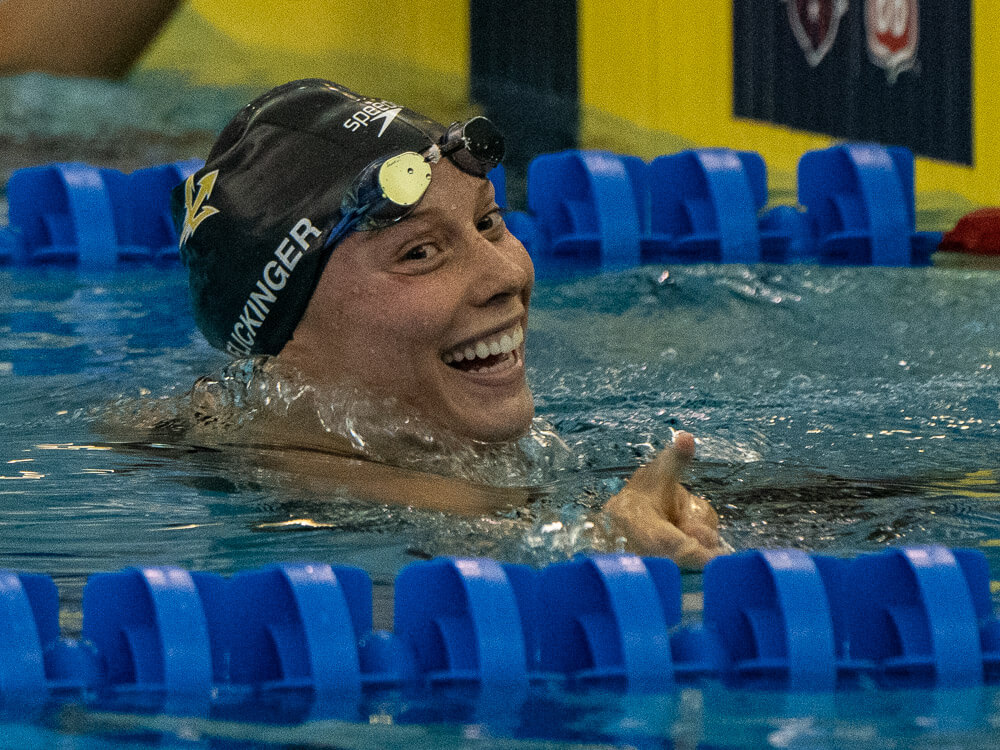 Hali Flickinger Returns After Break, Becoming Realtor: ‘Tired of Feeling Like Swimming Defines Me … I Had to Find Something Else’

Swimming lap after lap with big goals in mind day after day, month after month, year after year can take a big toll, especially when those goals aren’t being reached.

There is a time in every swimmer’s career where they wonder why they are putting themselves through this daily grind and torment. That crossroads is the beginning of the end for many swimmers.

But it also can be a new beginning if it leads to a fresh look on things.

Olympic medalist Hali Flickinger is getting that fresh look, and it has nothing to do with being in the water. She was tired of defining herself only through swimming, and now is a real estate agent in Arizona, giving her life a little more balance.

“It has been years coming. This summer, I had a chat with Bob (Bowman) and realized I needed something else in my life. I was burned out pretty bad and even said the words (I am gonna quit) to Bob,” Flickinger told Swimming World. “I have been pushing and pushing and I am tired of feeling like swimming defines me, and feeling like my worth is swimming. Sadly, it got to the point where I thought it was all over. I had to find something else. When you feel like your worth depends on your performance, that is when it all goes wrong.”

“It is a really good thing in my life to no longer feel like Hali Flickinger the swimmer, but Hali Flickinger the person. I want to love the sport again, when it comes to competition. I feel like I lost that many years ago. I have been struggling with that since I went pro, and it isn’t the greatest feeling.”

“I have had my license for like six years. It has always been something I wanted to do, but with swimming, it was never a thing. But I was always ready for it,” Flickinger said. “I started this summer and took a long break on swimming. I have been in it for a little bit now. Training has been a little different, but I am trying to balance the two. It has been the best thing for me mentally because I have something new and fresh. I am chasing again and I am a newbie, and that is so fun.”

Flickinger also gets to spend some more quality time with her husband, Martin, who also is a realtor.

“We are under the sam brokerage together, and that is something really cool for us to do together,” she said. “He is my best friend and I get to now work with him. That was always the goal. I has been amazing. It has been like a new little chapter.”

Once Flickinger got established in her “new chapter” she had to figure out if that chapter was going to involve swimming.

“The biggest thing is that I still haven’t accomplished the things that I have wanted to,” Flickinger said. “If it hadn’t happened the way my mind was — I have been working so hard, harder than anybody — then why am I doing the same thing. So I figured lets give this (new chapter) a chance because the old way isn’t working. I am the same every year — the same, the same, the same, the same. So let’s try it with something that doesn’t define me with what I am doing. There are still so many goals I haven’t accomplished — so many — that there is still a fire in my to want to accomplish them.”

Just the thought of that is refreshing to Flickinger, who is headed to the 2022 FINA World Short Course Championships in Melbourne.

“When I am behind the blocks now, I am not Hali the swimmer, I am Hali Flickinger, the real estate agent, “ she said. “That is going to be incredibly helpful for me behind the blocks. We are hoping that it helps my swimming. My training is helping me not control everything, and I think I have grown a lot in that aspect. It is training my brain to let go. And it helps to have so many great people in my circle. It is slowly coming together. I am glad I chose this path.”

Flickinger is slated to swim the 200 butterfly, 400 IM, 200 free and possibly be on a couple of relays at worlds.

“It has been a challenge. I really don’t have expectations in the water right now because I was so burned out,” Flickinger said. “I am just going to race at worlds. I always want to go fast, but I don’t have expectations. I want to have fun. I haven’t had fun at a meet in a long time. It is going to be in Australia, it is going to be summer there, and I heard our hotel is along the beach. I want to have fun with my American cap on my head, with by best friends on the national team. Maybe this is just what I needed. I don’t want to care about the results. I just want to be Hali.”

Swimming Caps are NOT designed to keep your hair dry?!