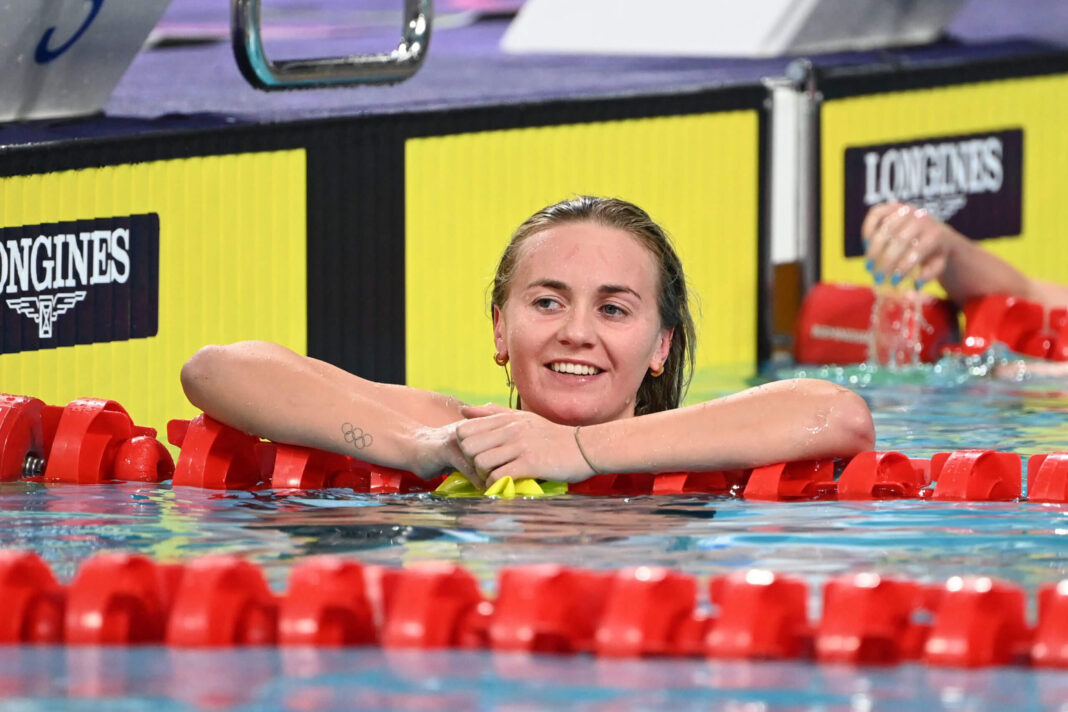 Australia’s dual Olympic and world champion and the newly crowned 2022 Swimming World female Swimmer of the Year,  Ariarne Titmus will make her racing return with a full book of freestyle events  at this month’s 2022 Queensland State Championships.

From Tokyo heroes to Birmingham Commonwealth Games gold medallists to the next generation of Queensland stars to international visitors led by an 86-strong group from New Zealand the Queensland States will start just days before the world congregates in Melbourne for the Fina World Short Course Championships.

Twenty-two year-old two-time Tokyo champion Titmus, who added four gold to her tally of seven gold at this year’s Commonwealth Games in Birmingham, will swim every freestyle event from 50m through 1500m and three club relays when the titles run from December 10-16 at Chandler’s Brisbane Aquatic Centre.

The girl from St Peters Western (SPW) will then swap her Speedos for the microphone when she joins a long line of swimmers to turn their talents to television – following in the footsteps of her father Steve Titmus – a noted Queensland news host and TV journalist with the Australian Olympic and Paralympic network Channel 7.

Titmus will hardly have time to dry off before scooting to Melbourne to join fellow Olympic and world champions Ian Thorpe and Giaan Rooney for her TV debut on the Channel Nine’s Wide World Of Sports commentary team for the FINA World Short Course Championships (December 13-18).

In the pool Titmus will join her Australian team mates at St Peters Western Kiah Melverton and Shayna Jack in the 1500m – a squad challenge Head Coach Dean Boxall puts on his troops every year.

Melverton, who with Titmus, Madi Wilson and Mollie O’Callaghan formed  that 4×200 world record-breaking team in Birmingham, will have the busiest program of the elite swimmers at the meet.

And while Titmus, Melverton and Jack will join the throng of what is always a popular Queensland States – Wilson and O’Callaghan will take up intricate places on the Australian Dolphins team at the Melbourne Sports and Aquatic Centre (MSAC). The Queensland Championships will also feature SPW’s other World and Commonwealth Games 400m freestyle gold medallist Elijah Winnington – who like the girls in his squad will line up in the 1500m as well as the 100, 200, 400 and 800m.

They will be joined by Birmingham team mates, Cody Simpson, Bowen Gough and Josh Edwards-Smith (Griffith University), as well as Somerset freestyle sprinters, Grayson Bell and Thomas Nowakowski dual Olympian Brianna Throssell who has moved from USC Spartans for SPW.

Olympian and former World record holder Matt Wilson and relay gold medal freestyle gold medallist Will Yang – are both part of the Sydney Olympic Park Aquatic team (SOPAC)who will make the trek north of the border. Also lining up in the Queensland Championships will be triple Olympian Cam McEvoy (Somerville House) who is back in Queensland after a stint in Sydney, where he swam the Australian Short Course with Manly SC, will line up in his specialist 50 and 100m freestyle events – events that will also feature sons of two former great Queenslanders – Will Stockwell – son of Olympic greats Mark Stockwell and Tracy Caulkins and Kai Taylor – son of triple Olympian Hayley Lewis.

Taylor, 19, is in Tokyo with the Queensland Development Team contesting the Japan Open where he has already won the B final in the 100m freestyle last night in 49.48 – a time that would have seen him finish fifth in the A final.

Swimming Queensland has a team of 24 swimmers and seven coaches who have already contested the Japan Invitational and will return home after the Japan Open to contest the Queensland Championships – all part of Head Coach Drew McGregor’s plan to take the next generation out of their comfort zone and subject the team to a series of meets while managing the pressures of travel and racing.

Other Queensland youngsters to feature on day one were 18-year-old Jacqueline Davison-McGovern (Yeronga Park) with a personal best of 4:13.18 to finish fifth in the A final of the women’s 400m freestyle; Lily Price (Rackley) third in the B final of the 50m butterfly in 26.86 and Amelia Weber (St Peters Western) who won the 400m freestyle B final in 4:15.10.

Justin Jefferson has a Gear Bag Packed with Superstardom Supplies