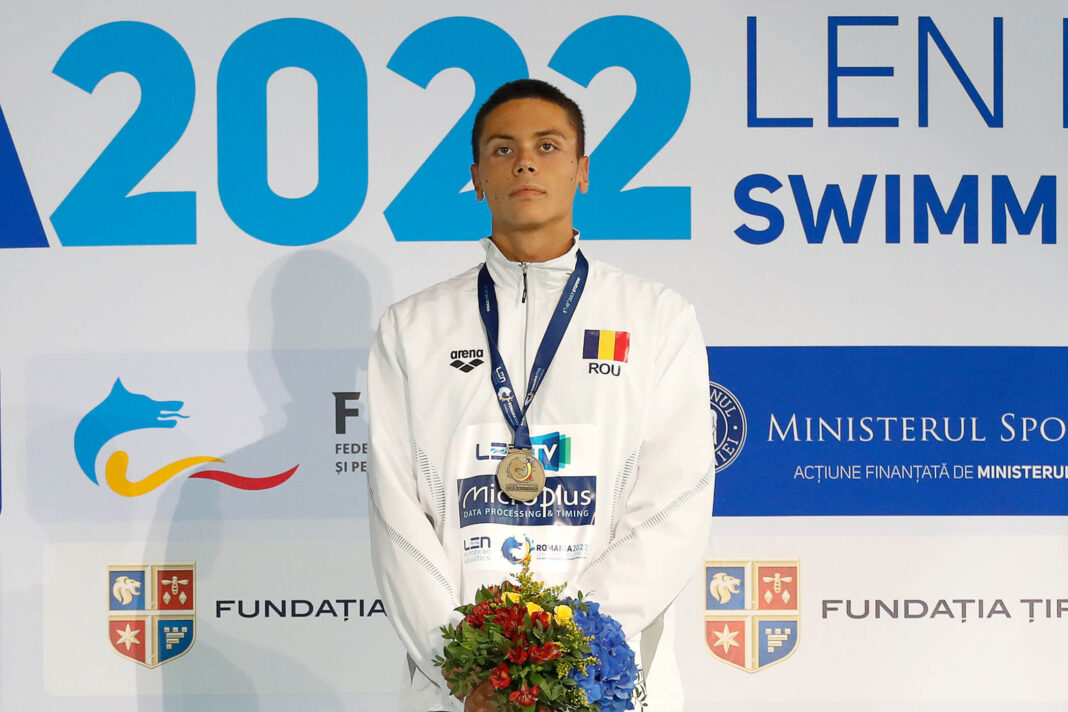 Second Gold For David Popovici In 200 Free; Leads Off Mixed 4×100 Free In 47.34 For Silver; Double Gold For Nikolett Padar

Twenty-four hours after propelling the Romanian men’s 4×100 free team to gold at the European juniors, David Popovici won the 200 free title before leading off the mixed free quartet to silver in 47.34.

The 17-year-old started his evening in his native Bucharest with a dominant 1:45.45 victory in the 200 free, finishing 2.16secs ahead of Lorenzo Galossi, who took second six weeks to the day after turning 16, with the Italian coming past Jacob Whittle on the last 50 as the Briton finished third for his second medal of the meet.

Victory meant Nikoletta Padar finished the night with two golds after she successfully defended her 200 free title with Merve Tuncel also twice visiting the podium with a second straight 1500 title as well as 200 bronze.

Krzysztof Chmielewski defended his 200 fly title in 1:55.49, a time good enough for seventh at June’s World Championships, ahead of twin Michal with the pair repeating last year’s 1-2 finish and that after the former led the way in the morning 1500 free prelims in 15:12.31.

There was a second championship record for Mary-Ambre Moluh in the 50 back with a dominant victory in 27.74, slicing 0.01 off the mark she set in the semis.

Popovici had qualified second for the final, cruising through his semi on Tuesday with the 4×100 free final to come, to book lane five alongside Galossi.

Romanian tennis player Ion Tiriac, who won the doubles at the 1970 French Open, was among the 2,000 watching on at the Otopeni complex.

Popovici spoke ahead of the meet about his desire to experience the roar of hometown support as did the Hungarians in Budapest last month.

“Today it wasn’t about time, I just wanted to enjoy this swim, I took the breath towards the crowd side to see the people waving their flags and jumping in joy and it was great.

“Even if I had multiple swims daily, this atmosphere really helps me to recover and feel fresh.

“Now I kind of recognise what Kristof Milak could feel while racing at home in Budapest at the Worlds.”

Come the final event of the evening and Popovici was in the water again, 24 hours after going 47.54 as the host nation won relay gold.

On Wednesday he sliced 0.20secs off that time to give the mixed free quartet a lead of 1.03 over Ksawery Masiuk of Poland, fresh from his 50 back victory and clocking 48.37, 0.15 off Konrad Czerniak‘s national record of 48.22 from the super-suited 2009 worlds.

Romania held a 0.38 lead over Poland at the final changeover only for Dora Molnar – a week after turning 16 – to drop an anchor leg of 54.49 to guide Hungary past both teams and into the wall in first place. Not only would he have been seventh but the 18-year-old would have been fourth at last year’s European Championships, 0.06 off the time in which Tamas Kenderesi took bronze as the Pole narrowly missed the final before going on to finish eighth in Tokyo.

In third was Ramil Valizada of Azerbaijan who was eighth at the midway point before he produced a 61.24 second half to his race to finish in 1:58.35.

Padar And Tuncel Atop The Podium “I expected to claim a win here and to be in the lead during the whole race, I just wanted to do a better time. It’s just a good feeling that you are destined to win, and you deliver, now my focus is on our relays.”

Tuncel returned for the 1500 in which she set a European junior record of 15:55.23 en-route to the title last year at the Foro Italico.

“It is my last year among the juniors, so it was really nice to win this race. It is hard to swim the 1500m free final and the 200m free final in the same session.

“After the 200m I was a bit nervous if I could do my favourite event well but when I started it, I was calm and I was able to do what I was expected to do. I’m happy to get two medals in one day.”

Moluh had clear water between her and fellow 50 back medallists, Lora Komoroczy (28.31) and Roos Vanotterdijk (28.62).

“This is my first big junior meet, and a final is always a complicated thing, I was a bit nervous before it, but now I’m happy with the gold, the first one here for France, which is great.

“I wanted to do a bit better time and there are a lot of things I have to do better even in this 50m back, so I want to work on this for sure.” “The World Championships were my main event, here I just tried to keep up some speed and I’m happy
with the time after all, and also with my swim in the relay yesterday where I did 48sec.

“You know, at this age it’s really hard mentally to do race after race in such a short period of time – it’s challenging to be ready some ten days after a World Championships. So I’m happy to get this gold.”

Just 0.07 separated the medallists in the men’s 50 breaststroke with Volodomyr Lisovets of Ukraine touching first in 27.62 with the Netherlands’ Koen de Groot (27.65) taking silver and Uros Zivanovic of Serbia third in 27.69.