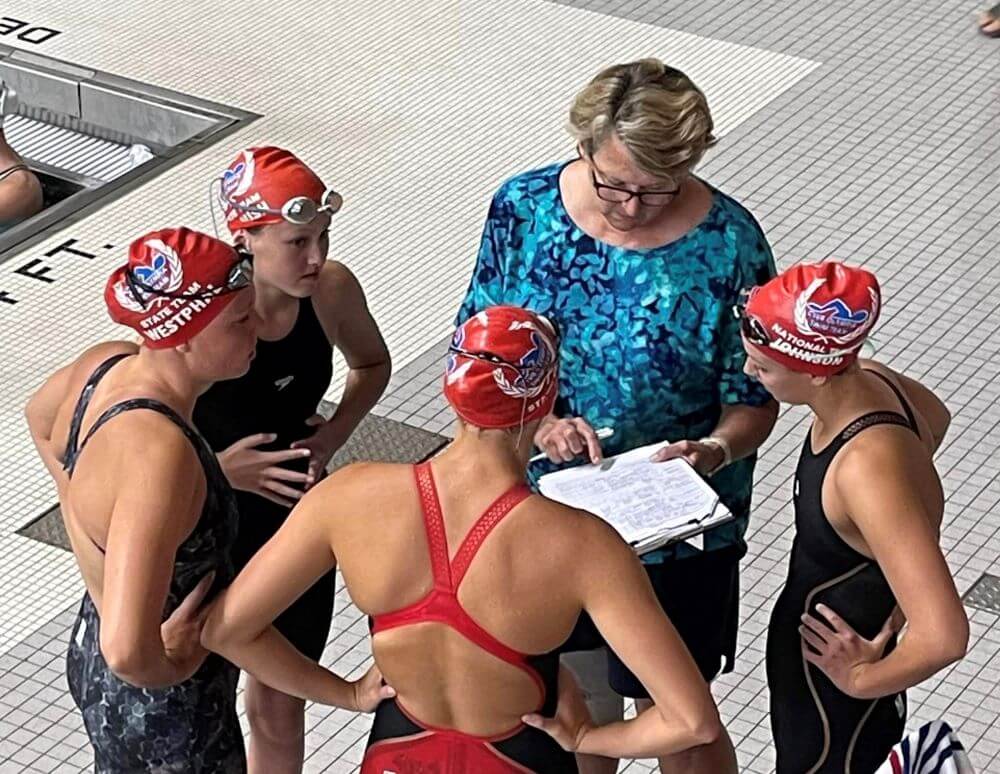 As swimmers bring in the new year, it is often the time to reflect on the year that was, while getting ready to embark on the journey ahead. Looking back on the past year allows one to reflect on the good times and the bad, while also remembering the people that were there through it all.

For an athlete, this person is usually their coach, a person who will spend countless hours with them in hopes of making them a better performer and a person. For swimmers, the relationship with a coach is especially meaningful, as few people understand the demands of the sport.

It takes a special type of person to be a swim coach, from waking up in the early hours to get ready for practice, to spending weekends on a pool deck. The amount of work required of the job is immense. Jennifer Brinegar has held every title in the sport, incuding swimmer, Olympian and coach. The influence she has left on the sport through these titles has left an extraordinary impact.

A History With Swimming

Born in 1961 in Bloomington, Indiana, Jennifer Hooker spent her early years surrounded by the cream and crimson of Indiana University. As a young child coming up in the sport in Bloomington during Doc Counsilman‘s unprecedented run during the 1970s, in which his IU team won six straight men’s national titles, Jennifer was mentored by the Hall of Fame coach.

“When I was eight, Doc took me under his wing, and really helped paved the way for me,” Brinegar said.

Even as a boisterous child, the time she spent with Doc is when you would find Jennifer the quietest, soaking in everything she could from the legendary coach.

“He would invite me down on deck during meets, when Royer Pool was standing room only, and around Doc, I didn’t say a word. But I soaked everything in,” she said. “I would listen and watch him talk to every swimmer. It didn’t matter if it was Mark Spitz or a walk-on. He coached everybody.”

The lessons she learned from Counsilman stemming from those meets and practices sessions, in which he would personally coach her, would shape Brinegar into the athlete she was became, and set the groundwork for the coach she would become.

A seven-time Big Ten Conference champion and a captain of the 1981 Big Ten championship team at Indiana University, Brinegar obviously had an outstanding swimming career. Through all of her accomplishments in and out of the water, if one stands out the most, it was her 1976 season.

Going into the United States Olympic Trials, Hooker could best be described as a major underdog, having never been named to a national team or even making a major final. Her best finish in any event prior to Trials was a fifth-place finish in the 800 freestyle at Nationals as a 14-year-old. That effort, which came three months before Trials, was a timed final. Although her performance in the 800 free at Nationals in Long Beach was her best performance at the time, Hooker qualified for the Olympics as a 15-year-old in the 200 freestyle.

The 1976 Olympics are remembered in the history books as one of the most dominant ever, with world and Olympic records falling in every event but one. On the women’s side, the East Germans were almost untouchable, the result of systematic doping which guided their performances.

“It was an awesome trip, but swimming-wise, it was not cut out for the Americans, and not until The Last Gold came out in 2016, did we realize what a great swimming performance we had, setting 13 American records,” Brinegar said.

Brinegar described the feeling among the American women as complete devastation, and when you compare their performances to what the American men were doing, it is easy to see why. The U.S. men won every event but one in Montreal. Heading into the last relay, the meet for the American women had been a disaster in their minds. Their last hope was the 400 freestyle relay and the four Americans swimming in the finals planned on leaving with gold.

“The coaches came up to me after my 200 free and asked me to swim on the relay (in prelims) so Shirley could rest up for the 800 finals that evening before the final event of the meet, the women’s 4×100 free relay,” Brinegar said. “I was just thrilled because I loved relays, and I would have done anything for Shirley (Babashoff) and this gave her the opportunity to rest up before her two swims that evening.”

Brinegar helped qualify the team for the finals that night, and when the 4×100 final went off, the team of Kim Peyton, Wendy Boglioli, Jill Sterkel and Babashoff shocked the sport with a world-record time and a defeat of the heavily favored East Germans.

Although Brinegar did not receive a gold medal because IOC rules at the time stated that only swimmers on the final received a medal, she was honored in the summer of 2022 for her contributions. The relay was inducted into the USOPC Hall of Fame.

Brinegar closed out her swimming career and entered into a different role in athletics. She returned to her beloved Indiana University as an Assistant Athletic Director. But where her impact has been the biggest is at her own swim club, Club Olympia, or as many call it “Club O.”

After having a successful coaching career at another club in Columbus, Indiana, coaching state champions and being named state coach of the year, Brinegar left coaching. The absence of the relationships with athletes and the profession left not just Jennifer but others in the swim community wanting her to start something new.

“A lot of kids and their parents had really been on me after I had stopped coaching to start a club,” she said. “I named the team in honor of the former Club Olympia out of Ft. Wayne. A team that was very successful in the ’70s and was coached by five-time Olympic coach, Stefen Hundyadfi, who I really respected a lot and feared a little, when I was an age group swimmer.”

With an overall goal of providing top-tier instruction to every athlete that comes through, Brinegar really just wants to give back while also seeing her athletes excel.

“I just want to give kids the same experience I had, which is really working on fundamentals and technique, learning how to be competitive, but also having fun,” she said.

Jennifer is married to her husband, Jamie, and together they have two children, Kevin and  Michael, both swimmers. Kevin swam collegiately at Denison University, where his team won three Division III national championships during his four years.  Michael swam at Indiana University and was a member of the 2020 Tokyo Olympic Team, competing in the 800 and 1500 freestyles.

“Having everyone together at Trials (to watch Michael) was just a great feeling of family,” Jennifer said.

Michael added: “My mom has had a big impact on my swimming. She has always been there to encourage me to be the best I can.”

Although the coach in her knows that Michael could have gone faster at Trials and in open water, and she is eagerly waiting for his next outstanding performance. Nonetheless, Jennifer and Michael are now in the exclusive group of Olympians together, and the even more exclusive club of mother-son Olympians.

As the winter season is in full swing, Brinegar is in one of her busiest times of the year. From her duties as head coach at Club Olympia to her newer role as an assistant coach at Columbus East High School, she is working to get her swimmers ready for high school sectionals in February and the club championship season in March.

Annie Murer, a senior swimmer at Bloomington North High School who swims with Club Olympia during club season, says the impact Coach Brinegar has had on her goes far beyond the pool.

“Coach Brinegar has really helped me develop as a swimmer by changing the sets to what we personally need to work on, and pushing us to work on specific details,” Murer said. “You can tell she cares about her swimmers so much even after they leave Club O.”

The Ultimate Guide To Your Metabolic Health

How To Start A Prayer Journal