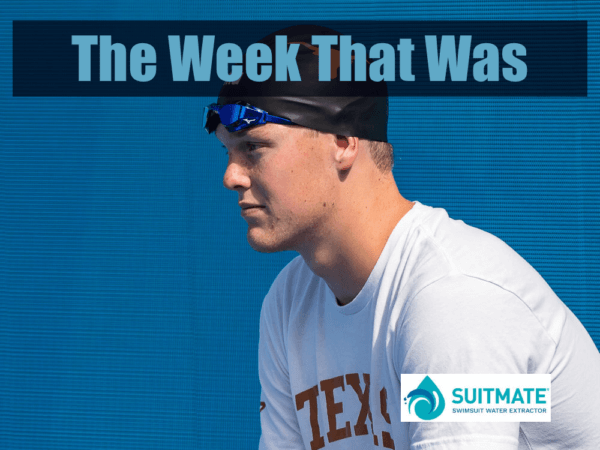 The Week That Was #1: Five American Men on the Verge of International Breakthrough Given their performances in previous seasons, it was not a huge surprise to see these men elevating their swimming in 2022. All had established themselves as key names to follow moving through the entire 2021-22 campaign, and they followed through on that promise. Now, who’s next? Here are a few swimmers now on the radar heading into this college season and the ensuing 2023 long course season. READ MORE…

The Week That Was #2: Back In Training, Ryan Murphy Targeting Paris 2024; Legendary Backstroke Status Within Reach Following a well-deserved break from the pool, Ryan Murphy revealed on social media last week that he has returned to training. A six-time Olympic medalist, Murphy has officially started his quest for a third Olympic berth, Paris 2024 the target. The Cal-Berkeley product was a triple-gold medalist at the 2016 Olympics in Rio de Janeiro, and he earned three medals at the 2020 Games in Tokyo. READ MORE…

The Week That Was #3: Sarah Sjostrom Planning For Sixth Olympic Games At LA 2028: “I Think I Am Going To Continue For Much Longer” A sixth Olympic Games in Los Angeles beckons for Sarah Sjostrom who is enjoying a much-needed break after an historic 13 months that included trips to the Olympic, world and European podiums.

The Week That Was #4: What’s Next For the International Swimming League? The 2022 international swimming calendar has been extremely busy, and there are still a number of high-level competitions before the year draws to a close. The FINA World Cup starts in October and has three stops in Berlin, Toronto and Indianapolis. Additionally, the Short Course World Championships are scheduled for December 13-18 in Melbourne. The postponement of Season Four of the International Swimming League (ISL) until 2023, however, has left a gaping hole in the international swimming calendar. READ MORE…

The Week That Was #5: Strong Women are Beautiful Women: Growing Up in a Swimmer’s Body Whether you are 13 years old and just growing into your body, or 20 years old and reshaping your body with college swimming, this sport really forces you to be aware of your own presence.

I cannot speak on behalf of our male counterparts in the sport, but growing up as a female swimmer, I can fully relate to the feeling of exposure swimming induces. When you are wearing a swimsuit in public for a few hours every day, it can feel as though your body is developing, maturing, and being shaped under a microscope. READ MORE…

Hollywood Celebrities Who Are Unrecognizable In 2021 | Marathon

Pearl Harbor Facts for Kids of All Ages