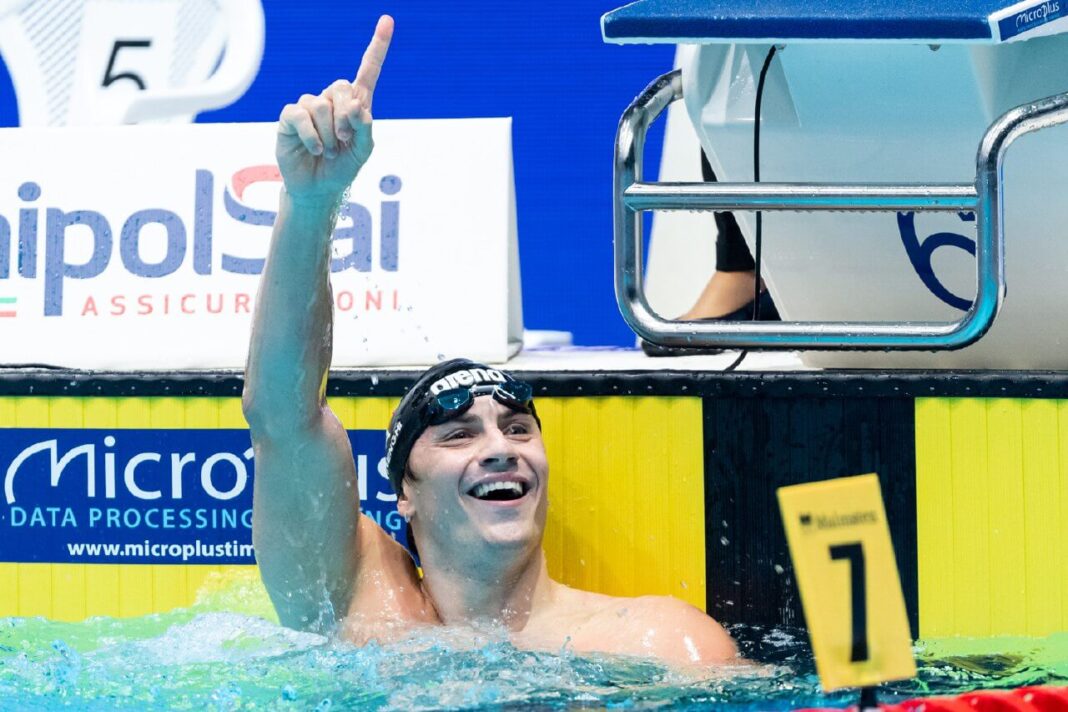 The first day of the European Championships got under way on Thursday morning at the Foro Italico in Rome.

Simona Quadarella produced the performance of the morning in the 800 free with a time of 8:23.46 in the 800 heats to book lane four as she seeks to defend her title.

As well as Szebasztian Szabo, 2021 silver medallist Andriy Govorov is competing in Rome although Andrei Shilkin, who won bronze last year, is not in the Eternal City as a member of the Russian team banned following the invasion of Ukraine.

Nyls Korstanje set a Dutch record of 22.90 in heat four, lowering his own mark of 23.02 from the Eindhoven Qualification Meet in April 2021.

The Netherlands swimmer was the only man inside 23secs to lead the way to the semis ahead of Maxime Grousset (23.20) and Diogo Matos Ribeiro (23.24).

A new champion will be crowned following the retirement of Femke Heemskerk who won in Budapest last year.

Anna Hopkin – bronze medallist last time out – did not start, the British on their third major meet in a matter of weeks following the World Championships and Commonwealth Games which only finished last week. Alberto Razzetti – silver medallist in Budapest behind Ilya Borodin of Russia – led the way in the first heat of two in 4:17.21.

But it was David Verraszto who headed the field into Thursday’s final with a time of 4:15.52 in the second heat ahead of Spain’s Joan Pons Ramon (4:16.17) and Razzetii.

World champion Leon Marchand – who scared Michael Phelps’ world record in 4:04.28 en-route to the global crown – is not competing. Margherita Panziera won the title in Budapest last year and she went in the final of three heats.

Federico Poggio was the first man inside the minute mark in 59.49 in the third of five heats.

World champion Martinenghi was in the following heat and was out in 27.90 before touching in 59.08.

Olympic silver medallist Arno Kamminga went in the final heat and came through in the final metres to touch in 59.32.

The meeting of Martinenghi and Kamminga is set to be one of the highlights of the meet and the pair were swiftest through to the semis.

The relay offers Katinka Hosszu a chance of a 97th international medal with Hungary booking lane four in 8:01.05 ahead of the Netherlands (8:01.15).

Italy were third through in 8:05.29 in a race in which there were eight entrants after Austria opted not to start.

Defending champions Russia are not competing because of the ban and Britain – silver medallists last time out – are much changed here without Olympic champions James Guy and Duncan Scott as well as Joe Litchfield, part of the quartet who won bronze at the World Championships in June.

Britain squeaked through by claiming the eighth and final spot in 7:18.61 having been 10th at halfway.

Simona Quadarella had clear water between herself and the rest of her heat as she clocked 8:23.46 to lead the way into the final. The Case For Inclusive Hiring: Are You Overlooking The Benefits?