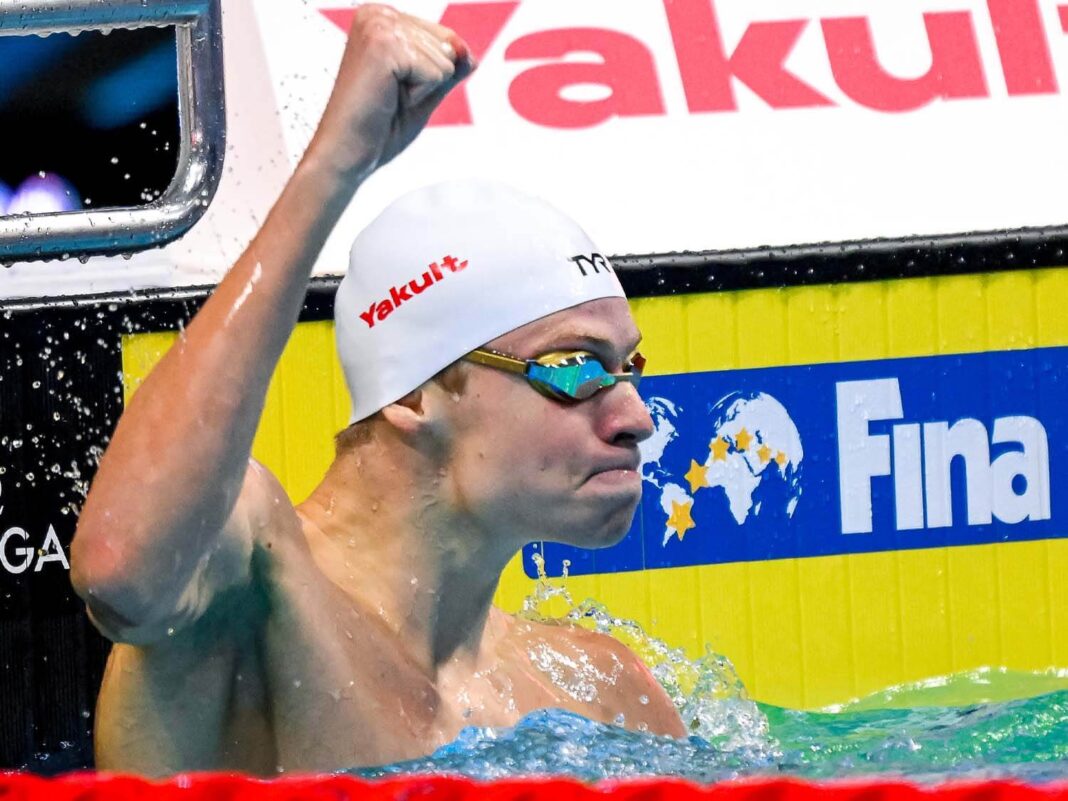 The busy summer of international long course racing in the year following the Tokyo Olympics saw a series of new stars take their places as the best of the world. And while the traditional powerhouse nations, Australia and the United States, remain the best of women’s swimming, most of the emerging talent on the men’s side hails from Europe, with France, Italy, Romania, Hungary and Great Britain all capturing individual world titles this year.

Of course, the results from this year, including the medals handed out at the World Championships, Commonwealth Games and European Championships, matter, but pretty much the entire swimming community has one eye pointed forward to next year’s World Championships in Fukuoka, Japan, a meet expected to produce results more indicative of the full global picture, and of course the 2024 Olympic Games in Paris. With that in mind, here’s where men’s swimming stands as of today.

You could make a strong case that the top three male swimmers in the world today all hail from Europe. All three men were double gold medalists at this year’s showcase meet in Budapest, and the veteran in the bunch was the hometown hero, 22-year-old Kristof Milak. Milak dominated the butterfly events at the World Championships, lowering his own world record in the 200-meter race while easily handling a field missing Caeleb Dressel in the 100 fly. He again went double gold at the European Championships in the butterfly races, with an impressive silver in the 100 free plus two relay medals (fueled almost entirely by his own efforts) to boot.

Leon Marchand, a 20-year-old from France and now training at Arizona State University, is the new individual medley star. He challenged a world record, the 400 IM mark that Michael Phelps set in 2008, that no one had approached in the 14 years of its existence. He was the top 200 IMer in the world and the second-best 200 butterflyer — and his short course results plus his splits in IM races hint that a world-class 200 breaststroke is in the cards.

The third member of this golden trio is David Popovici, the 17-year-old who emerged from anonymity just before last year’s Olympics and now is the world’s best in the 100 and 200 freestyle. He was stunning at the World Championships with marks of 1:43.21 in a golden effort in the 200 free and then 47.13 in the 100 free, and then he topped himself in a huge way at the European Championships as he became only the third man ever under 1:43 in the 200 free (the first in 13 years) and knocked off Cesar Cielo’s 13-year-old world record in the 100 free.

Remember, that was the mark that Dressel and so many other world-class sprinters could never touch, but a 17-year-old could. And now, that 17-year-old has been deemed the most exciting swimmer in the world.

That’s Europe’s big three, but there’s more. Italy’s Thomas Ceccon crushed the world record in the 100 backstroke this year (51.60), and his countryman Nicolo Martinenghi was the world champion in the 100 breaststroke. The two combined to lead Italy to a world crown in the 400 medley relay. Speaking of Italy, Gregorio Paltrinieri returned to his familiar spot on the gold-medal podium this year as he swam the second-fastest 1500 freestyle in history.

It was a somewhat off-year for Great Britain, with Adam Peaty and Duncan Scott both missing Worlds for reasons outside of their own control, but Peaty remains the best sprint breaststroker of all-time, and a full-strength Scott will be out to regain his place among the world’s best in the 200 free and the IM events next year. Of course, Ben Proud filled the gap for Britain this year as he captured World, Commonwealth and European gold medals in the 50 freestyle, and Tom Dean, a surprise Olympic champion last year, backed up his success with a large collection of medals from the various meets.

And we cannot forget about Germany, with veteran Florian Wellbrock remaining one of the world’s best distance swimmers in the pool and open water and 20-year-old Lukas Martens emerging quickly, with results including a 3:41 in the 400 free. And while Russia is currently banned from international competition, Evgeny Rylov and Kliment Kolesnikov remain among the best in the world.

With all that said, it’s hard to argue with Europe’s swimming supremacy on the men’s side right now.

Questions for the United States

A strong young core of American women took a step forward in 2022, particularly with Torri Huske and Alex Walsh winning their first world titles. For the U.S. men, on the other hand, there are significant questions. Yes, the Americans won seven men’s gold medals at the World Championships, but three of those were in the non-Olympic 50-meter stroke events. Bobby Finke made another leap forward this year as he won a world title in the 800 free and a silver in the 1500 free, both in American-record time, while Ryan Murphy won his first individual world title in the 200 back plus a silver in the 100 back, although we should note that the Russians were absent.

The star for the Americans over the past six years has been sprinter Caeleb Dressel, who last year became just the third male swimmer after Phelps and Mark Spitz to win at least three individual gold medals at one Olympics. At this year’s Worlds, Dressel led the Americans to 400 free relay gold, and he also won the 50 fly, but after that, he withdrew from the meet because of undisclosed medical concerns. Dressel has not made any public comments since, and it’s unclear when he will compete again.

Dressel is central to American hopes in sprint free and fly events plus the 400-meter relays. The Americans had not won the 400 free relay at a major meet in seven years before Dressel joined the squad, and they are undefeated since his arrival in 2016. And his absence hurt the U.S. 400 medley relay in a loss to Italy in Budapest.

Meanwhile, Nic Fink was a standout for the U.S. men this year in the breaststroke events, but he is 29 years old and admittedly uncertain about his long-term future in the sport. That said, a few younger swimmers did swim well enough this year to secure their status as potential future centerpiece swimmers for the Stars and Stripes.

Hunter Armstrong broke the world record in the 50 back in April, and he broke 52 seconds in the 100 back for the first time as he won bronze in the event at Worlds. Teenager Matt Fallon could be the next star for the Americans in the 200 breast after swimming a time of 2:07.91 in the event at U.S. Nationals. And the U.S. 800 free relay team of Drew Kibler, Foster, Trenton Julian and Kieran Smith reclaimed the world title with a three-second victory after a shocking fourth-place result in Tokyo.

Yes, those are some strong performers with certain potential for continued improvement, but the Americans still have a lot of uncertainty, particularly in the traditionally-strong sprint and relay events, in the two-year run-up to Paris.

Australia’s men currently lack the depth and firepower of their female counterparts, who compose the consensus top women’s team in the world right now. But Australia still has a handful of really elite performers and some solid freestyle depth that has them always in the mix for relay medals.

The only non-European male swimmer to set a world record this year was Zac Stubblety-Cook, who became the first man ever under 2:06 in the 200 breaststroke, and he added a world title to his ledger in that event. While he is only a medal contender in one individual event, his breaststroke speed is good enough to make Australia a perpetual medalist in the mixed 400 medley relay.

Elijah Winnington was favored for Olympic gold in the 400 free last year as he entered with the No. 1 time in the world, but he faltered in Tokyo. Not in Budapest as he blasted away from the field for a gold medal in that event, and he surpassed Grant Hackett as the No. 2 Aussie in history behind Ian Thorpe. Winnington was also the driving force of Australia’s 800 free relay that won silver at Worlds and gold at the Commonwealth Games.

Finally, there’s Kyle Chalmers, who skipped the 100 free at the World Championships but was a huge force in helping Australia to silver in the 400 free relay and gold in the mixed gender version of that event. Chalmers later cruised to 100 free gold at the Commonwealth Games, and the 24-year-old always shows up in big races.

No, this is not a world-dominating squad, but the Aussie men have not been on such a level in 20 years. But with these three men at the helm and Junior Pan Pacs star Flynn Southam quickly emerging on the scene, Australia could be in position to win a nice haul of men’s medals in two years.