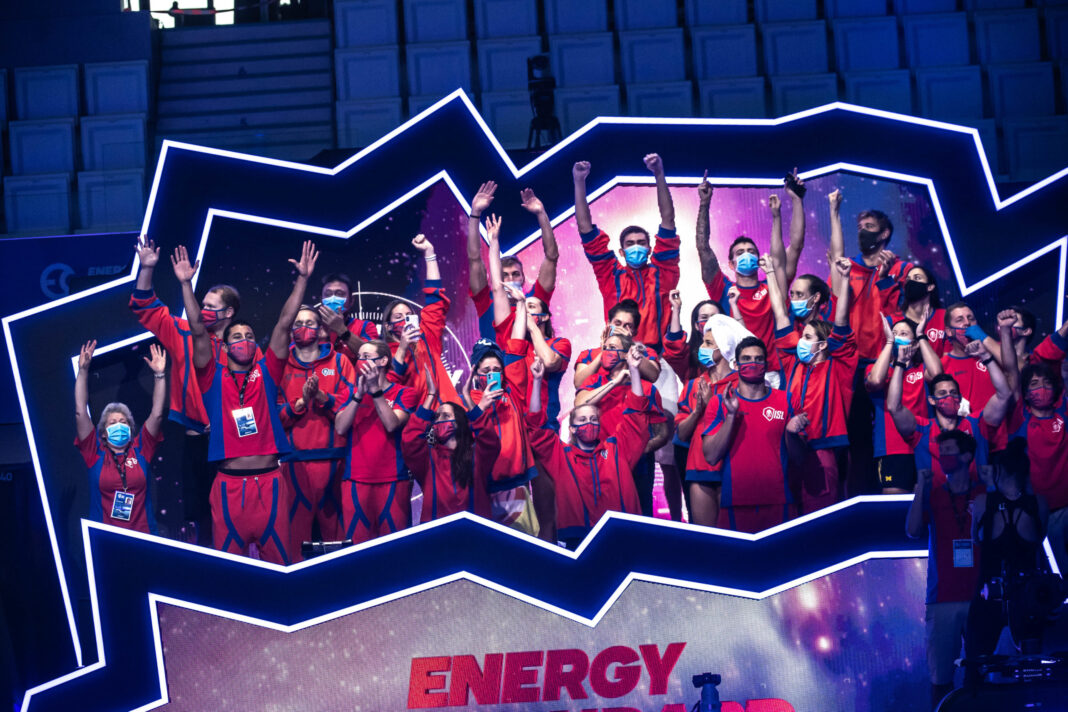 The 2021 International Swimming League season kicks off on the heels of the Tokyo Olympics. Season 3 of the 10-team league gets underway in Naples, Italy, on Friday, the first day of a two-day Match 1.

The opener features the two teams who missed out on the semifinals last year, the D.C. Tridents and Aqua Centurions, trying to get a jump on the field this time. They’re joined by perennial power Energy Standard and the Toronto Titans, one of the two expansion teams with 2020. Energy Standard is the favorite in ISL Match 1, but one of the other teams stands to gain big from picking up points in second.

Events updates are below:

Louise Hansson got the Toronto Titans off to a fast start, winning the women’s 100 fly in 56.02 seconds. That’s within seventh tenths of Beryl Gastaldello’s league record from last year, and it’s a return of 15 big points from the Swedish Olympians. Elena Di Liddo of Aqua Centurions was second in 56.33 with Energy Standard’s Anastasiya Shkurdai and Maddy Banic in third and fourth.

Energy Standard’s Chad Le Clos rallied on the second half to get past Marius Kusch and get ES the full points. His winning time was 49.27. Kusch was the only other swimmer under 50 seconds in 49.98 for Toronto, followed by DC Trident’s Zach Harting.

Much like last year, the Toronto Titans women are showing the way, particularly in the strokes. So it was against in ISL Match 1 with a 1-2, and a yield of 22 total points, thanks to Lisa Bratton, who won the event in 2:02.00. Kylie Masse was second in 2:03.15, the reigning Olympic silver medalist. Third was Energy Standard’s Mary-Sophie Harvey with Federica Pellegrini, expanding her area of expertise, in fourth for Aqua Centurions.

The gold medalist in Tokyo has his first win in ISL this season, with Evgeny Rylov rallying over the last 50 to nip Jacob Pebley. Rylov clocked in at 1:49.61, getting 12 points for Energy Standard. Pebley, who took a step back this summer and didn’t swim at U.S. Olympic Trials, is making the most of his physical and mental rest, going 1:49.93. AC’s Leonardo de Deus was third.

From a Russian backstroker to a pair of Russian breaststroker – Energy Standard’s Evgenia Chikunova controlled the field to win the 200 breast in 2:19.21, getting 12 points via the jackpot. DC Trident’s Maria Temnikova was second, followed by Canadian Olympian Tessa Cieplucha for Toronto.

Put the D.C. Trident on the board for ISL Match 1 thanks to Tommy Cope, who used a stellar middle 100 to pull away and get the win in 2:04.09. Second was Aqua Centurions (and Olympic silver medalist) Arno Kamminga in 2:04.71. Toronto yielded the most points out of the event with Anton McKee and Fabian Scwhingenschlogl in third and fourth, respectively.

The relay points in Season 3 can be huge, especially if you throw down a swim like what the Toronto Titans just did. The team of Anika Apostalon, Kayla Sanchez, Michelle Coleman and Louise Hansson picked up the win in 3:29.79, a result that with the jackpot yields them 30 points and puts them in the lead after the first session. Hansson did the job, dropping the hammer on the final leg at 52.04 to get the Titans to rally. They were seventh after Apostalon’s leg.

Second was Energy Standard, with the more highly touted team of Siobhan Haughey, Sarah Sjostrom, Anastasiya Shkurdai and Maddy Banic. Aqua Centurion was third with DC Trident fourth and fifth, giving them the second-biggest point haul of the event.

After seven races of ISL Match 1, the team scores are:

A scant six tenths separated the eight swimmers in an exhilarating men’s 50 free. When the wash settled, it was Ben Proud who had gotten his hand to the wall first in 21.15 seconds for Energy Standard. Just .32 seconds was the spread from parts two through eight. Aqua Centurions got the better of that battle with Szebasztian Szabo and Alessandro Miressi in second and third, respectively.

Sarah Sjostrom has still got it, in ISL and beyond. Sjostrom won the women’s 50 free in a quick 23.50 seconds for Energy Standard. She was .12 ahead of Kasia Wasick, one of the big offseason moves for the Toronto Titans. Siobhan Haughey was third, Energy Standard picking up 18 points from the race.

Back after a one-year hiatus, Chase Kalisz made his presence felt in the men’s 200 IM, rallying on the final 50 to get the win for Aqua Centurions in 1:53.64. His fast final kick denied Toronto’s Alberto Razzetti the win, but the Titans got the better points wise with Razzetti second and Finlay Knox third for 13 total points. Andreas Vazaios scored for the DC Trident in fourth.

A big boost for the Trident, as Bailey Andison got her hand to the wall first in 2:06.44. She finished strong, holding off the charge by Mary-Sophie Harvey of Energy Standard by 0.18 seconds. Speaking of charges, Kayla Sanchez provided the swim of the race with a 29.30 on the final 50, going from eighth to third. She ended up at the wall in 2:09.63.

Anyone wondering about the appeal of the 50-meter stroke events need look no further than what was unleashed upon the Naples pool in the men’s 50 breast. Six hundredths of a second separated the top three finishers in a spectacular race, with Nicolo Martinenghi of Aqua Centurion getting the win in 26.03. Only a sneak into the wall by Felipe Silva of DC Trident interrupted the Italy/AC 1-2, with Silva taking second in 26.07. Fabio Scozzoli got third in 2609 with Felipe Lima nabbing points for Energy Standard in 26.19.

Aqua Centurion again picked up big points in the women’s race, another 1-3 with an added jackpot. Arianna Castiglioni got to the wall first in 29.42, her teammate Martina Carraro third in 29.93. The AC sweep was interrupted by a third Italian, Benedetta Pilato of Energy Standard, pushing her way into second place in 29.51.

Is Artificial Food Coloring Safe For Kids? Here’s What You Should Know.