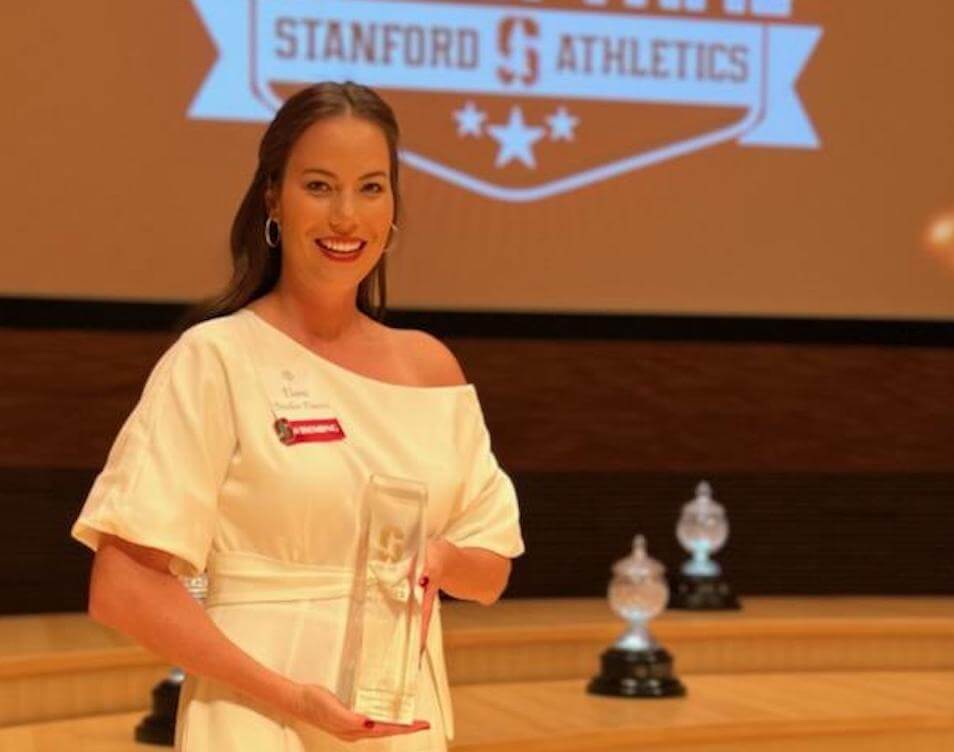 With her entire family, including her young children, in the audience, Breeden spoke at the Stanford Athletic Hall of Fame induction ceremony, one of 10 inductees in the all-female class celebrating the 50th anniversary of Title IX.

“They really rolled out the red carpet quite literally. Stanford knows how to do it. They really celebrate their student athletes and their accomplishments. It was a pretty special weekend,” Breeden told Swimming World. “It was so much fun. It was awesome to be celebrated. These days I am a mom full-time and it is never about me, but this was a flashback to my glory days. My whole family came out for it. The ceremony was great. It was a celebration of Title IX, so it was an all-female class for the first time ever with some pretty big names. It was an awesome class and a huge honor to be included among them.”

Breeden swam at Stanford from 2007-10. She was a four-time NCAA individual champion, claiming the 200 butterfly three times and the 100 butterfly as a senior, when she led the Cardinal to an NCAA runnerup finish as a team. She finished her career as a seven-time Pac-10 champion and 24-time All-American, which has her top 10 in Stanford history in any sport. She held the American record in the 200 butterfly at 1:49.92 for nearly a decade.

She claimed USA national titles in both butterfly events in 2005. In her international career, she won a silver medal at the 2008 Olympics in the 400 medley relay.

“I had to do a lot of reflecting because I had to do a speech. I had to really stop and think about what I wanted to say. It was difficult to conjure up really specific memories from college because it seems so long ago. I have lived in three different states and had two kids since then,” she said. “I decided to focus my talk on the people who helped me along the way. That made it a lot easier to frame the talk. I was definitely reflecting on what I had accomplished and things that I didn’t accomplish, but those have faded.”

Breeden thanked her family and supporters and spoke of her Cardinal pride.

“I was so proud to represent Sanford and wear the Block ‘S’ on my swim cap,” Breeden said in her speech. “I was supported by so many successful and empowered women, it really made me feel invincible. It is an honor to bring my two daughters, Julia and Victoria, back to campus to celebrate equality in sports and the achievements of these women.”

Breeden said she was honored to be part of such a legendary class and was proud Stanford chose to do something special for the Title IX anniversary. “It is really reflective of Stanford and the mentality of the athletics department to provide the best training, the best facilities and best of everything for their male and female athletes. Stanford focuses on diversity, inclusion and equality and it was a great time to highlight that. It was a celebration of Stanford’s empowerment of women, which was reflective in a lot of the speeches,” Breeden said. “One of the inductees brought up that the athletic director during the time Title IX was implemented said they were going to embrace it and be at the forefront of it, while others tried to get around it. That was some history I didn’t know and it was really cool.I was brave enough to bring a 2 and 4 year old to a ceremony like that. It was special for them to be there and see all of these women.”

They might be too young to remember a lot about the evening, but they will always know their mother is a Hall of Famer at Stanford. Breeden left an incredible legacy in and out of the water. She was a champion, an Olympian, but also a role model who was down-to-earth but also outspoken. She said her legacy out of the water means more to her than in the water.

“One of the most important things for me during my career was being a good sport. I always wanted to be uplifting and kind to competitors and gracious in winning and losing. Showing that there is more to swimming than just winning,” Elaine Breeden said. “I didn’t want my identity to be completely wrapped up in my successes in the pool. That is a hallmark of a lot of Stanford athletes.

I always wanted to be bettering myself outside the pool. I wanted to be a good ambassador for swimming in the U.S. and Stanford.”

Now, she is an ambassador and a Hall of Famer.

But where are his legs 👀 #shorts #bodybuilding #legday

High School Musical 4 is Coming Thanks to HSMTMTS