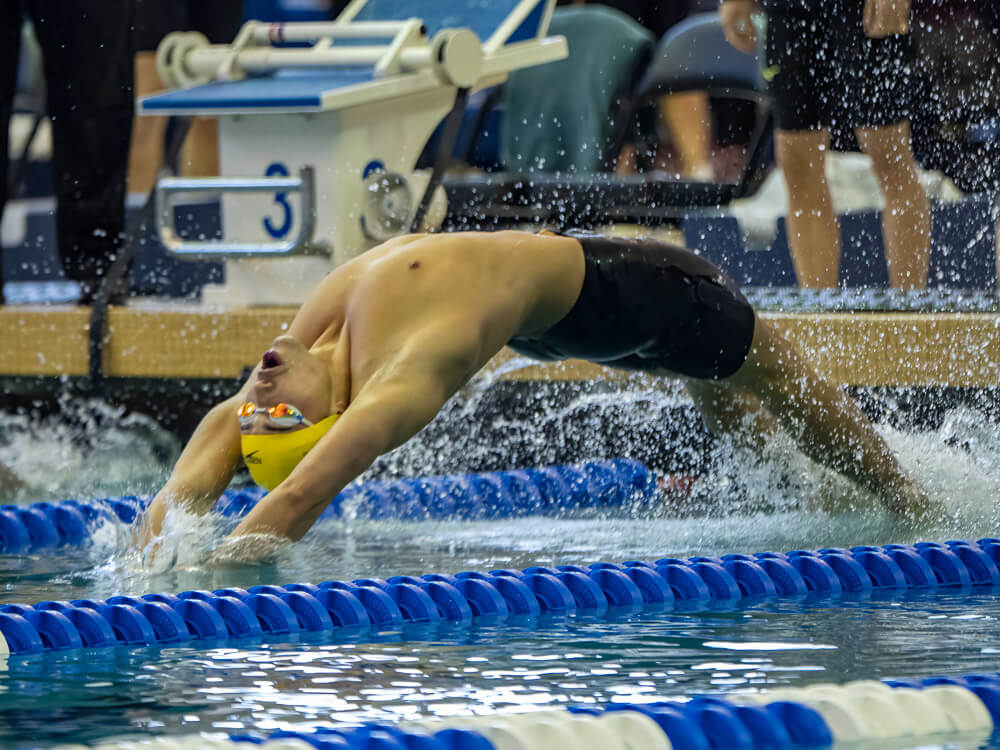 The reigning national-champion Cal men continued to post impressive results at the Minnesota Invitational, and during Friday night’s finals session, junior Destin Lasco swam the fastest time in the country this season in the 100 backstroke while fifth-year swimmer Reece Whitley tied defending NCAA champion Max McHugh in the 100 breaststroke. On the women’s side, the Texas women continued their strong performances as Anna Elendt and Lydia Jacoby went head-to-head with a pair of quick times in the 100 breast.

Lasco became the first man to dip under 45 seconds so far this college season as he went 44.88 to claim a win over Cal teammate Bjorn Seeliger. Lasco, who was fourth in the event at last year’s national championships in 44.36, overtook 2022 national champion Kacper Stokowski (45.02) for the top mark in the country. Seeliger came in second at 45.23, good for No. 3 in the country behind Lasco and Stokowski, and Texas’ Chris O’Connor placed third in 46.31.

In the 100 breast, McHugh and Whitley both posted times of 51.51. That moved them into a three-way tie for No. 3 in the country with Virginia’s Noah Nichols. They rank behind Auburn’s Reid Mikuta and Texas’ Caspar Corbeau, who is absent this week while preparing for the Short Course World Championships. Pitt’s Cooper Van Der Laan touched third in 52.14.

Speaking of Short Course Worlds, Texas swimmers Carson Foster, David Johnston and Jake Foster are all scheduled to represent the United States in Melbourne beginning Dec. 13, and all three were done for the meet after posting the top times in the 400 IM in prelims. Carson Foster went 3:38.95, just off his third-ranked season-best time of 3:38.79, while Johnston was second in 3:39.36 (good for fifth-best nationally) and Jake Foster third in 3:44.70. In their absence, Longhorns freshman Alec Enyeart won the final in 3:47.40 ahead of Minnesota’s William Christenson (3:48.39) and Arizona’s Jake Hand (3:49.05).

Cal’s Dare Rose moved into the top eight nationally with his win in the 100 butterfly. He clocked 45.30, while the Texas duo of Cole Crane (45.61) and Sam Artmann (46.20) placed second and third, respectively.

As the Texas women seek to match last season’s second-place finish at the national level, they will rely on having two of the country’s best breaststrokers on their roster. The Longhorns showed off that depth in Minnesota. Anna Elendt, the World Championships silver medalist in the 100-meter breast, took the win in the 100-yard race in 57.48, just six hundredths ahead of teammate Lydia Jacoby, who went 57.54. Third went to Minnesota’s Emma Lezer in 59.96.

Jacoby joined Texas this year after winning Olympic gold in the 100-meter breast in 2021. Jacoby’s time was a lifetime best to move her to No. 14 all-time in the event, and the times rank second and third in the country, respectively, behind defending NCAA champion Kaitlyn Dobler of USC (59.64).

With all of the impressive performances by Texas in the 100-yard races, the stage was set for a big performance in the 400 medley relay, and the Longhorns delivered. Olivia Bray (50.92), Elendt (57.08), Sticklen (50.82) and Pash (47.14) combined for a time of 3:25.96, crushing the previous top time in the country (held by Stanford) by more than a second. The same four swimmers in the same order finished fourth in the event at last season’s NCAAs, but they swam four tenths faster here.