Despite Shoulder Surgery, Mitch Larkin Has Paris In His Sights 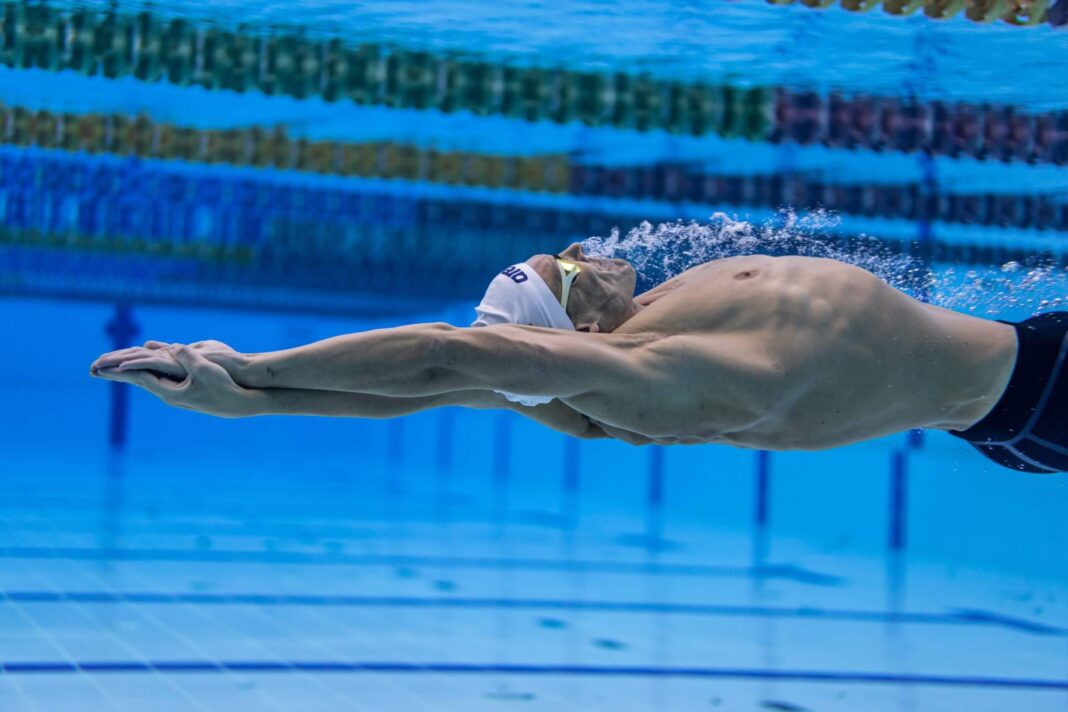 Australia’s Olympic backstroking top gun Mitch Larkin has revealed for the first time the pain and anguish he swam through during this year’s World Championships and Commonwealth Games campaigns which led to major surgery.

Larkin – the triple Olympian, two-time Olympic medallist, a five-time world champion and seven-time Commonwealth Games gold medallist swam in the two biggest meets of the year with a painful four centimetre tear in his shoulder.

Larkin had suffered the injury just days out from the Australian Trials in June when he “felt his shoulder go” as he and coach Vince Raleigh put the finishing touches to his preparation at Chandler’s Brisbane Aquatic Centre.

The initial diagnosis was not great, the doctor telling Larkin he thought he had sub-laxed the socket (With a subluxation, the bone may pop back into the socket by itself. Both subluxation and dislocation can cause similar symptoms).

But Larkin, the star of the 2018 Gold Coast Commonwealth Games, decided to go to Adelaide and swim the Trials – throwing caution to the wind and unsure what tribulations lay ahead.

Today marks 12 weeks since Larkin eventually underwent surgery on that shoulder – talking about his trepidations of stepping out in public for the first time with his arm in a sling– and revealing to many of his teammates what he had been through.

Larkin has told his story exclusively to Swimming World – from the time he decided to swim the Trials – to the news on his return from Birmingham two months later that he would need immediate surgery if he ever wanted to live a normal life let alone swim again.

The scan showing that his subscapularis (subscaps) had completely ripped off the bone – and the only way to fix it would be to have it stitched back down – in a complicated process.

“For surgeons to do that,” said Larkin, “they had to cut my Long Head of the Biceps Tendon as well to make room for everything to be stitched on.

“They would sew that back down and shave the bone through a groove to make room for four anchor points which have 16 smaller anchors off them.” Last Saturday night a nervous Larkin stepped out at the Hancock Prospecting inaugural Patron’s Awards in Brisbane with only a handful of his closest Tokyo, Budapest and Birmingham teammates aware of his ordeal in a crowd of almost 300 people.

Larkin had shown extraordinary courage “swimming in pain” and not only making the Australian Dolphins team for the World Championships and Commonwealth Games with his second placed finishes in the 100 and 200m at Trials – but also making two finals in Birmingham and finishing fourth in the 200m backstroke – winning gold in Australia’s Mixed Medley Relay.

Doctors were later amazed at what Larkin was able to achieve – shaking their heads at Larkin’s ability to swim though the pain barrier.

Australia’s premier backstroker who first broke onto the Australian team for the 2012 London Olympics, would go to World’s in Budapest three weeks after making the team unsurprisingly failing to make a final – knowing Birmingham would always be a better option.

“World’s was always going to be a challenge seeing it was a shorter turn around than usual – around three weeks – I continued to get regular physio, doing heaps of isometrics – but the shoulder was super weak in some positions,” said Larkin.

“It actually didn’t get much better – in fact it got a lot worse – and I raced through Commonwealth Games in a lot of discomfort.” So off to the Australian team doctor again after the last night of racing in Birmingham and Larkin was told it was almost certain his “subscap” had completely torn off the bone.

Larkin had a displacement tear of the subscapularis (subscap) – the surgeon telling Australia’s celebrated backstroker it had detracted back some four centimetres, strongly advising the operation.

Making it clear that if he had kids later in life and wanted to lift them above his head, let alone swim again, then surgery was his only option, making it clear he may never race again without the operation.

“Swimming is just a part of your life and putting this into perspective if you ever have kids and want to lift them over your head in your 40s or 50s you need to get this shoulder tided up…” he was told.

“I was able to swim at 90 percent and unless I had the surgery I would always sit at that 90 percent level and I would do a lot more damage the longer I left it…and in some positions I would only ever get to 50 or 60 percent…. I made the call to get it done.

“But your body and in my case my arms and legs are your weapons in the water and when they fail you it’s kind of pretty hard to take.

“I know it’s going to be a challenge getting back and believe it or not I’m excited to get back. “It has been a tough three months and for the first six weeks it was really rough.

“I spoke to Shayna Jack and said ‘hey I get the fact that it’s tough being away from swimming…it’s the one thing we know and the one thing we love to do….with this surgery and the sling – I said to all my family that all the aspects of joy in my life have been taken away.

“I love being active, I love being in the water, I love going to the beach, and I love exercising

“But I couldn’t get my heart rate up too high…and as an athlete that’s probably the most frustrating thing…I couldn’t drive, I couldn’t cook, use my hands, I had to rely on my Mum and Dad to took after me in for eight weeks, which was really nice but challenging and I realised just how much I missed it…and I guess a good realisation to have…

“It was a time I caught up with (former team mate and fellow Olympian) David McKeon and ultimately his shoulder operation ended his career which was quite sad.

“But it was nice to know my doctor and physio have looked at David’s re-hab plans and we have really used that as a foundation to do my re-hab.

“I said to the doctor that at the end of this and if I never make it back I can have those plans in place and that re-hab for someone else in the future…that is still a positive to come from it….” And despite those trepidations of walking into last Saturday night’s Patron’s Awards Dinner, Larkin was pleased he went.

“Everyone came up and asked how I was going or what happened and it was so good to be together with the team to celebrate the team’s success in Tokyo,” said Larkin.

IN BIRMINGHAM Larkin looked around the pool had told reporters

“It’s exciting to know that my property analyst job (with Trilogy Fund Management ) is the future, that is something that I really do enjoy.

“But you can only swim for so long and once you give it up, once you hang up your swimming togs, it’s really hard to come back.”

Larkin knows what he has been through is a part of elite sport and he’s grateful and proud of his career and is determined to give it another good crack.

“The doctors are really happy…we know it’s a slow process but I’ve done everything by the book and stuck to the plan,” says Larkin, who is up for his next battle.

And just today Larkin received some really positive news from his surgeon. “My tendon has started to anchor back to the bone really well and is looking healthy,” Larkin told Swimming World.

“My next steps are just strengthening the tendon then eventually the muscles around it as well. The appointment really couldn’t have gone any better.

“I am lucky I have time on my side…the plan is to get back into the water at the end of this year or early next year and try and push for Trials.

“But if that is not enough time the plan is to go on to Paris 2024 Olympic Trials and depending on what happens that would bring an end to my career….”

The size of the fight in Mitch Larkin is a perfect fit.