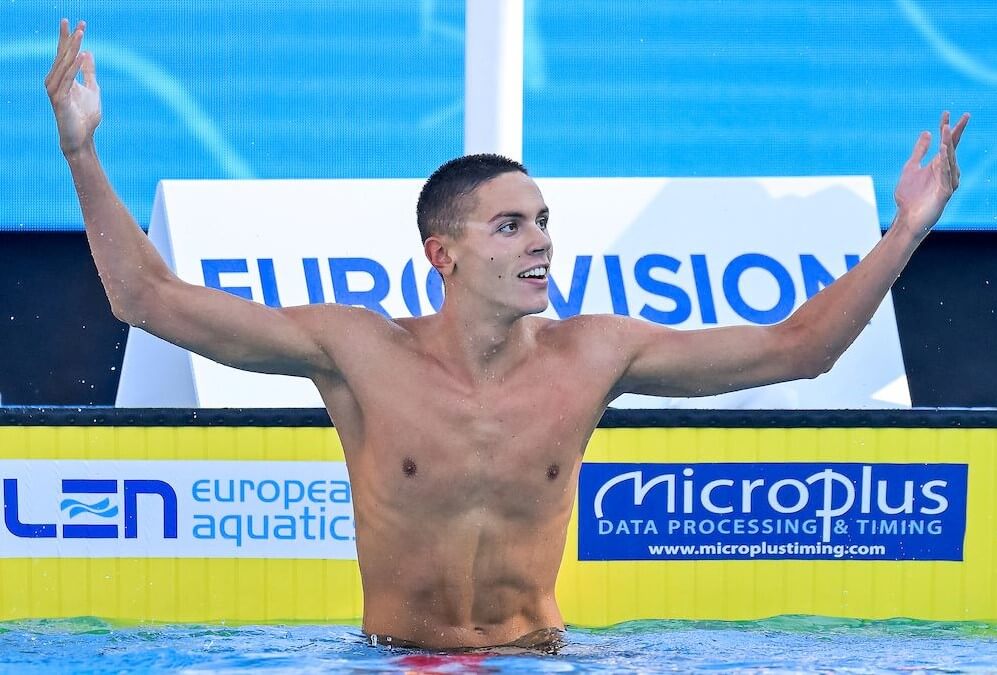 Somehow, Cesar Cielo managed to encase his record in an impenetrable vault. Or so it seemed.

Yes, the world record of 46.91 seconds that the Brazilian set in the 100 freestyle was mighty impressive in 2009. In the feverish heyday of supersuits, it stood out as exemplary, even if its decade-long reign over the world’s sprinters was unforeseen then.

Time and again, Cielo’s record dodged attempts to dislodge it from the summit. That included a handful of swimmers zooming within two-tenths of the hallowed mark in the decade since. So when David Popovici went 47.13 in the semifinals of the World Championships this summer, then dipped to 47.58 (still good for gold), the “here we go again” began again. Would Popovici, even at a precocious 17, be yet another sprinter who enjoyed victories aplenty but couldn’t take down Cielo’s record?

The answer, Popovici would answer in fine fashion a month later at the European Championships, was a resounding no.

Popovici’s swim of 46.86 in the final in Rome – fittingly, the location of the record-breaking frenzy in 2009 that changed the sport forever – finally put Cielo’s record in the past.

“There was no rush and I had to be extremely patient about the world record,” said Popovici, who had set the European mark of 46.98 in semis the day before. “I’m still hot from the race, but these championships are not over yet, nor this very long season. It has hurt but it’s always worth it and I feel fine right now. It felt great and it’s very special to break this record which was set here in 2009 by Cesar Cielo.”

Popovici assembled an astounding 2022. He did the 100/200 double at both Worlds and Euros. He added the same two golds, plus a relay gold and a relay silver, at the World Junior Championships and added the 50/100/200 sweep plus men’s 400 free relay gold at European Juniors. By December, he had enough left to win a silver medal in the 200 free at Short-Course Worlds.

Along the way, he set World Junior Records in the 100 and 200 free, plus the 100 free SCM mark. He also set the best time in a textile suit in the 200 free at 1:42.97, leaving only Paul Biedermann’s heretofore unassailable world record (1:42.00) from 2009 in his sights. If anyone knows the territory of taking down totemic records from a previous age, it’s Popovici.