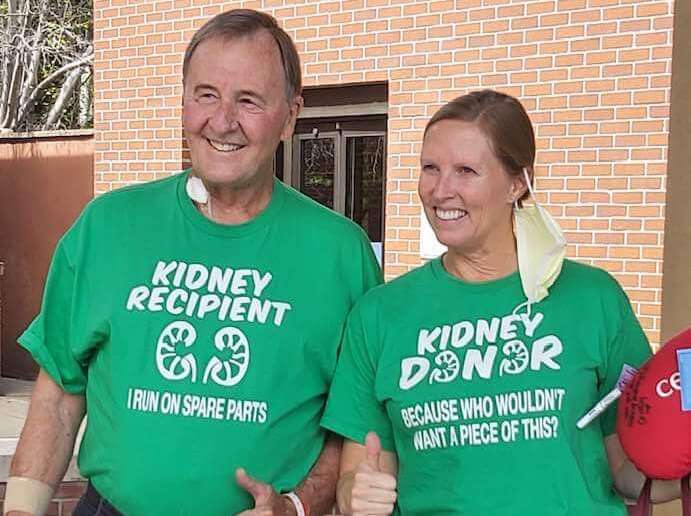 Heroes are everywhere in the sport of swimming.

Their heroics are celebrated with every gold medal or broken record as they etch their names in the history of the sport.

But what makes swimming so great is the heroics of swimmers outside the pool, like Olympic gold medalist Crissy Perham donating a kidney to Richard “Dick” Franklin, father of Missy Franklin.

And there are loads of other examples, including:

• Kaitlin Sandeno being a spokesperson for the Jessie Rees Foundation, encouraging children and their parents to “NEGU” … Never ever give up

• Paralympic swimmers who inspire on a daily basis

And those are just a few examples. There are many more swimmers and coaches who have had an immense impact on the sport and beyond with what they do out of the water.

Perham joined that list when she donated a kidney to Dick Franklin. The 1992 Olympic gold medalist created this amazing bond with the families of two Olympic gold medal swimmers with her generosity and bravery. Fittingly, Missy dubbed the kidney “Olympia” and spoke of heroes.

“My hero (and Crissy, Crissy is my hero too),” Missy posted about her father. “My dad is 77, an age that some hospitals don’t even DO organ transplants for. Today, he is three days post transplant with NORMAL levels for the first time in two decades. He and Crissy (our angel, his donor, and our new family) are doing phenomenal. … Live organ donation SAVES. LIVES. It gives people the gift of time with their loved ones. There is NO greater gift. I have YEARS to spend with my father, and my daughter has YEARS to spend with her grandfather. And not just years, but wonderful, healthy years because of Crissy, her heart, and her perfect, beautiful kidney.”

This is one of swimming’s amazing moments, and it didn’t come in the pool.

“Meet my guardian angel Crissy Perham,” Dick Franklin posted on Facebook. “We are both out of the hospital and doing well. … I am beyond words.”

With so many swimmers raising awareness for worthy causes, this is the time to raise awareness for live donors. Healthy adults can save lives.

Franklin said more than 40 people signed up for donation after his wife, D.A. Franklin, posted in January about the level of help Dick would need to survive.

It sounds like a lot but 40, when you screen out matches and other things, could be just a handful of people, which is a blessing, but could also be more.

Often times it takes a cause hitting home for people to act. Well this cause hit home to the swimming world on both fronts. It is an amazing story of generosity from a donor, to an amazing story of survival for the recipient. And they are both integral people within the sport of swimming.

Plus that is just one person needing a donor, and there are thousands. In fact, D.A. Franklin said Dick’s sister, who happens to be Missy’s Godmother, also received a kidney just six weeks ago.

Live donors completely changed the course of the Franklin family. Without them, Missy could have lost a father and a Godmother, and her daughter, would have never remembered them. But with them, there is new life within the family, who emerge stronger than before.

That is the act of heroes.

The Wall Street Journal Brings Current Events to Your Classroom