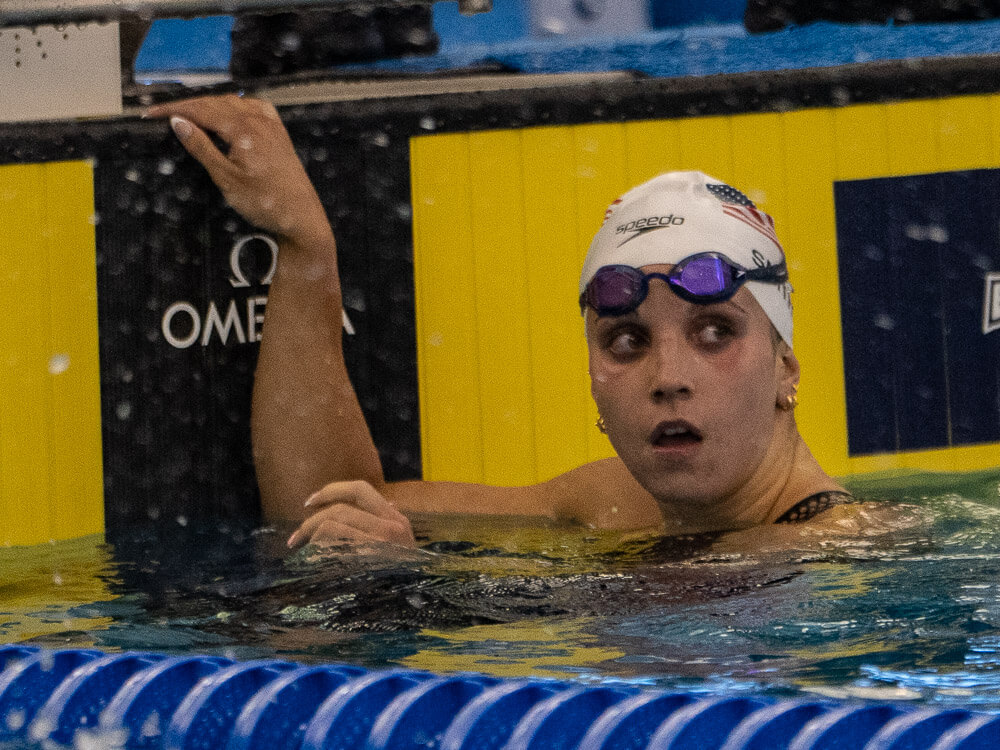 On the road to the 2024 Olympic Games in Paris, Regan Smith is firmly etched as a favorite to represent Team USA. The 20-year-old is already a three-time Olympic medalist from the 2020 Games in Tokyo, and Smith enters the New Year – and next week’s TYR Pro Series stop in Knoxville – with momentum from the recent U.S. Open.

But is another event on the horizon?

A scan of the psych sheets for TYR action in Knoxville shows Smith entered in a handful of freestyle disciplines, including the 200-meter distance. Why is Smith’s presence in that event noteworthy? Well, it is over four laps where Smith has her best opportunity of logging additional relay duty for the Red, White and Blue.

According to the USA Swimming database, Smith owns a personal best of 1:58.44 in the 200 freestyle, produced in downplayed competition in 2019. It is an effort that doesn’t lend itself toward consideration for the American 800 freestyle relay, but it simultaneously offers a glimpse of Smith’s potential in the event. Meanwhile, Smith has been elite in the 200-yard freestyle, and she is an athlete whose short-course and long-course exploits are of equal balance.

Based on her performances at the U.S. Open, it is clear her training in Arizona is paying dividends from a purely athletic standpoint. More, she has spoken positively about a boost in her mental state, and confidence she can deliver the best times of her career. So, why not chase another relay opportunity, especially for an event in which the United States could use depth.

At this juncture in the Olympic cycle, Australia is the favorite for gold in Paris. That identity was earned at the Commonwealth Games last summer, thanks to a world-record effort that saw the Aussies crack the 7:40 barrier for the first time. On the way to a 7:39.29 clocking, it certainly helped to have hammers like Ariarne Titmus and Mollie O’Callaghan leading the way.

With Titmus bypassing the competition, the United States claimed gold at the World Championships in 7:41.45. That relay featured Katie Ledecky (1:53.67) and Bella Sims (1:54.60), and both should play critical roles in Paris, especially with Sims blossoming into a star. That American relay from Budapest also saw Claire Weinstein lead off in 1:56.71 and Leah Smith contribute a split of 1:56.47.

Surely, Weinstein and Smith will be in contention for Team USA roles on the 800 freestyle relay in future international meets. In the teenage Weinstein, a teammate of Sims and Katie Grimes with Sandpipers of Nevada, a major upside exists. More, the United States features the skill set of Erin Gemmell, who also figures to be a consistent presence on the global stage.

As for Smith, she is an intriguing possibility. We know about her elite status in the backstroke and butterfly, and an updated marker in the 200 freestyle will be provided next week in Knoxville. Because it’s a midseason competition, no one is expecting Smith to unload an outing that will shock. Yet, she will supply an indicator of where she stands, and whether she could be a future option.

The presence of Regan Smith in the 800 freestyle relay picture would be welcomed. After all, depth is always a positive.

The Full Moon In Taurus + Full Moon Eclipse On November 8