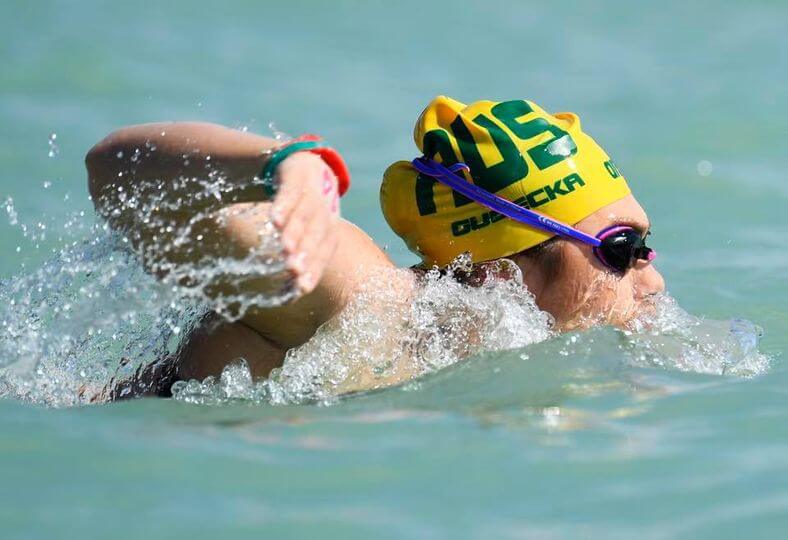 Yeronga Park (QLD) Olympian Chelsea Gubecka has powered her way to today’s women’s 10km Australian Open Water Championship win in Busselton, WA – turning the clock back to a race she first won 10 years ago as a 15-year-old.

Now 25, Gubecka has spent a decade on the Australian Open Water teams, including the 2016 Rio Olympics, but is relishing a new lease of life as she targets a second Olympic campaign for Paris next year, despite some slight doubts even before today’s race.

Gubecka admitted she had not been feeling “that great” in the water – thinking she was “in a hole” and was unsure how the race would unfold.

Then the hard work under coach Rob Van Der Zant and Katie Sparkes and a decade of experience in the sport kicked in and those doubts were quickly washed away off the Busselton Jetty as she set about doing what she does best. ,

“Although I didn’t feel all that great in the water I swam into the race a little bit and I just had to trust the process and not to go out and do anything silly,” Gubecka reminded herself.

“My mentality was ‘I don’t know how this is going to go..maybe just try and go top four and make it through to the next round in March’… but as the race went on it felt better and better.”

Drawing on a life time of experience and in particular her 2022 victory over the last two Olympic gold medallists, Brazil’s Ana Marcela Cunha (Tokyo, 2020) and The Netherlands Sharon Van Rouwendaal (Rio, 2016) – who also won silver behind Cunha in Tokyo.

Gubecka and her 2021 World Championship team mate 26-year-old Moesha Johnson (Griffith University, QLD) and 24-year-old Tokyo Olympic 1500m finalist Maddy Gough (Carlile, NSW) took it in turns as they navigated the 10km course under and around the bustling Bussleton Jetty.

Places on the Australian team for the LEN Cup in Israel in March and the second phase of selection for the World Champion ships and a Paris Olympic place very much front of mind.

Johnson, eighth in last year’s World Championships, had led through the halfway mark and through the last lap after Gubecka had led early – with the experienced Gubecka knowing that the last 1000m is where the race would be one.

“We have been working on that last kilometre – to make it really strong,” said Gubecka.

“I just wanted to see how everyone else would go – I didn’t want to lead a whole lot, obviously I did find myself up the front for a little bit.

“But I just pulled over and let someone else have a crack – and then Maddy, Moesha and myself rotated the lead a little bit which was             quite nice.

“And in the end the work we had been doing over that last 100m really paid off.”

Gubecka looked strong as she powered her way to the finish ahead of Johnson and Gough.

But life had not been a bed of roses for Gubecka who admitted to losing her way between 2019 and 2020 and she knew she had to find her love of swimming again.

“I lost myself back in 2019 and had to find myself again and what I really enjoyed about swimming and racing and obviously training is a massive part of this sport,” said Gubecka, who sat down and plotted her future with coach Kate Sparkes.

“Just being happy getting in the water every day and doing a real good job at that.

“We have to adapt and develop a bit more speed and that’s what we’re working on it’s something we’ve got to keep working on for the next 18 months – with pool swimmers having a go at the open water.

“And the sport is going through that shift so it’s really good.

“I’m really lucky I’ve been doing this for a really long time now and this will be my 11th year on the Australian team and I’ve been very lucky that I’ve been able to travel every year and get that experience and I’m hoping that now is the right time to show that off.

“It’s 18 months out from Paris so we just have to be the very best we can be, fingers crossed that we get there, leading into the big one once more.

“I’m lucky to have some of the best 1500m swimmers in the world pushing me along.

“It’s really exciting that there has been a shift in the women, like there has been in the men, with the pool swimmers coming in – it really changes the dynamic.”

And on her win in Israel last year, where she will return to in March.

“(Winning that Fina World Series final) was something I wanted to achieve for a long time and I really didn’t know if it was possible,” said Gubecka, who is excited to be returning to Eilat.

“Everything just went right – the feeding was right, skills were right, everything felt relaxed, my mentality was good and I felt really good about myself – Everything came into place and even today, I was able to draw on that.

“As I said we’ve been working hard on that strong finish and hopefully we can continue to build on that internationally but I know there is a lot of work to do between now and then.”

Will Smith slap shows Hollywood celebrities ‘are hypocrites, not philosophers’

I’m Good at Holding My Poop. Why?

Who Is Kacey Musgraves Dating?