Carolina Sculti Making Most of Extra Year, Switch to USC 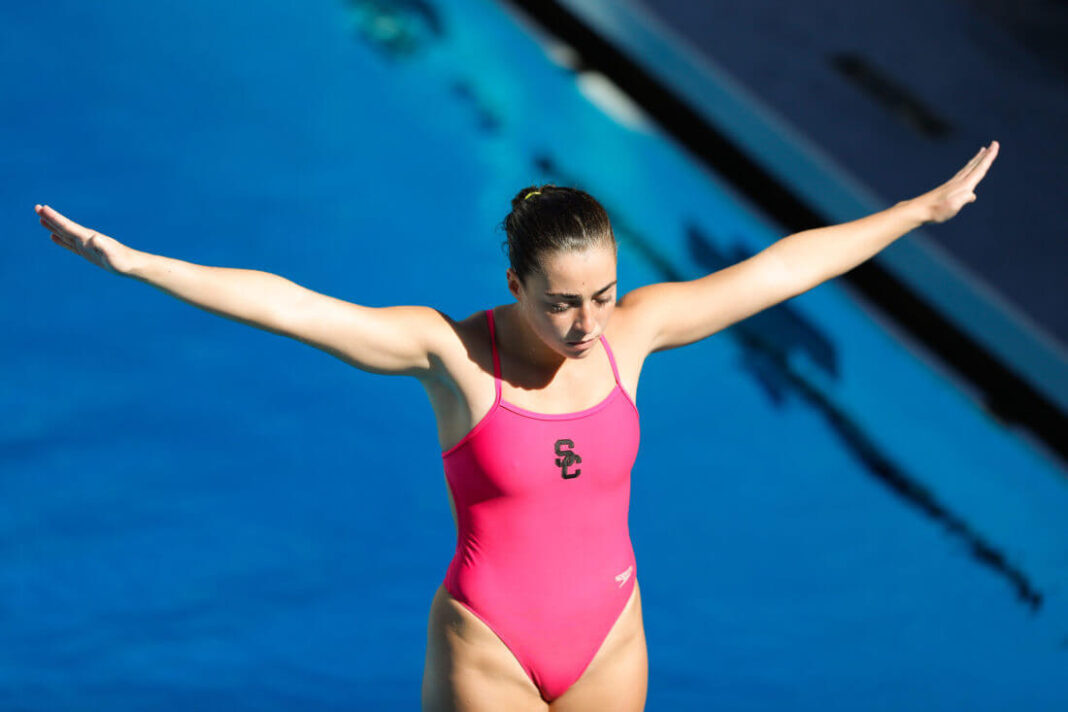 Carolina Sculti had a year of eligibility remaining and had a decision to make.

After four years at Stanford, the Pac-12 champion diver looked to her future goals to determine where this year should take her. Sculti, already an entrepreneur, wanted to go where she could train toward the 2024 Olympics and get her masters degree in entrepreneurship. It made the decision to move to USC very easy.

Sculti has started a business to connect college athletes with youth athletes as mentors and private instructors. The group is called Elete.

“That is where I want to be in 2024, the Olympics and seeing Elete go nationwide,” Carolina Sculti told Swimming World. “In order to keep growing as a diver, I needed a new environment. My senior year, I started getting into entrepreneurship at Stanford. When I saw USC had a graduate program in that, it seemed like a perfect fit.”
Especially with her growing business.

“I started a company last year called Elete with a friend from Stanford, who was on the soccer team. It pairs college athletes with youth athletes for mentorship and private lessons. Now that NIL has happened, it is something that athletes might not know how to get into. We wanted to streamline that opportunity for athletes to pass on that wisdom and have kids work with their role models and work to their goals together,” she said. “We have some Stanford and USC athletes on board. When we graduate, we are hoping to raise money and spread to other Pac-12 schools and eventually nationally.

“It has been cool to be part of a really passionate athletic community and entrepreneurship community. This is what I came here to do.”
She also came to dive.

“It is important for me to know why I am doing it,” Sculti said. “Then there is the adrenaline piece, which is why I am in the sport. You are so nervous, then hit a dive. That fear and excitement is addicting. To do that five times every meet is so fun.”

It is that rush that keeps her focused on her goals in the sport.

“I want to keep diving until 2024. I have wanted to go to the Olympics since I was 5-6 years old. Having that extra year felt like a blessing. The timing really panned out well,” she said. “I have had the same list of dives since I was 17. That is five years on the same list. To have the grit and persistence to perfect those dives is definitely sometime I take pride in.”

Sculti has been an All-American at the NCAA Championships, but also won the Pac-12 title on the 3-meter board last year.

“At Stanford, my biggest moment was winning Pac-12s my senior year. Especially coming off the pandemic when I didn’t compete my junior year. To come back and compete in a super close final was definitely the highlight of my whole collegiate career thus far,” she said. “I would love to win another Pac-12 championship, but what would be better would be winning NCAAs. I made the A final last year but missed a dive. Putting that together would really be the dream.”

Sculti has seen plenty of success outside of the college arena as well. She won a bronze medal at the World University Games and also won the bronze at U.S. Winter Nationals last year.

“Getting bronze at winter nationals was a pretty big deal for me. The last two years, I have really stayed consistent on the national level. That gives me faith that I am continuing to get better. Hopefully at nationals in May, I can get top two and make the world championship team. I have been on the cusp of that the past couple of years. I want to establish myself in that way before the Olympic year,” Carolina Sculti said. “The most important thing I have learned is trusting your training. Having actual belief in that is what is going to set apart the people who perform and people who don’t. That takes a super long time to understand, but it is what keeps you sane at those meets.”

And it is what has kept Sculti in pursuit of her dreams both in and out of the water.

Tai Chi can help to give a sense of purpose — TaiChiUSA

This 30-Second Eyebrow Massage Can Help With Headaches

Your Place or Mine: Trailer, Cast, Release Date