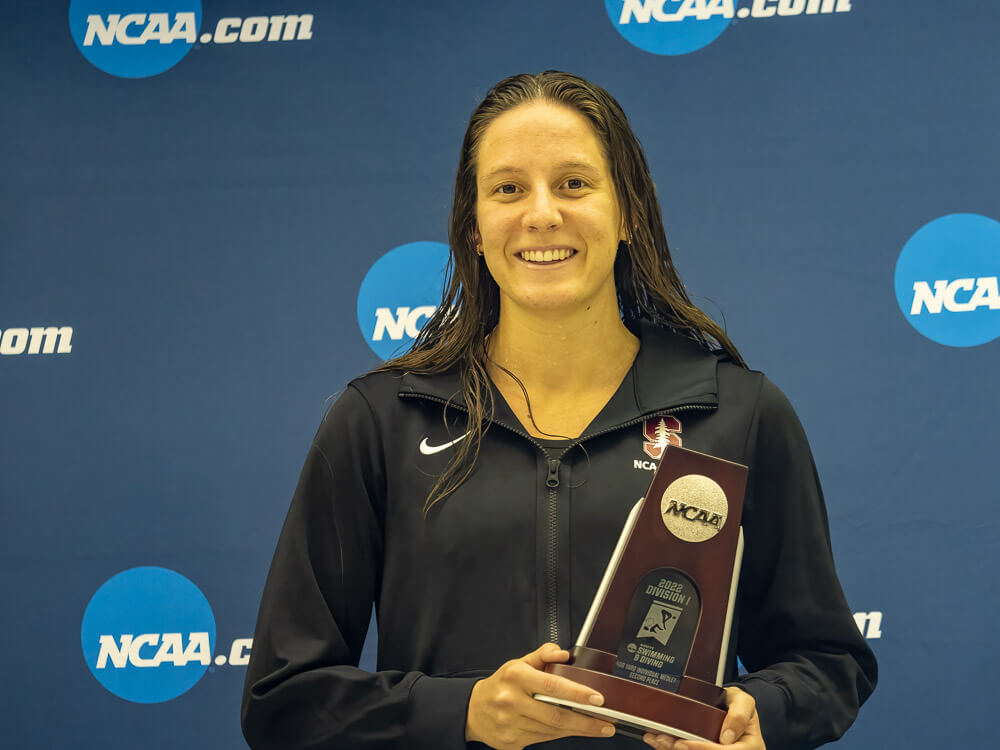 The NCAA released its Top 30 honorees for the 2022 Woman of the Year Award on Thursday, with the Pac-12 being one of two NCAA Division I Conferences with multiple candidates. Chosen from an initial list of 577 nominees and then narrowed down to 156, Stanford’s Pac-12 Woman of the Year Brooke Forde and Arizona State’s Emma Nordin are among the 30 female athletes selected as honorees.

Nine finalists will be chosen by the selection committee, with three honorees from each division. From those nine, the NCAA Committee on Women’s Athletics will go on to select the 2002 NCAA Woman of the Year. The Woman of the Year, along with the Top 30, will be celebrated at the NCAA Convention, for the first time in history, in January.

In its 32nd year of celebration, Woman of the Year honorees are chosen due to their diligent demonstration in academics, athletics, community service and leadership.

As female student-athletes that have completed their undergraduate studies, this award recognizes those who have stood out and set themselves apart in their communities, in their academic careers, and in their athletic endeavors.

Four student-athletes from the Pac-12 have won the prestigious NCAA Woman of the Year award: Justine Schluntz (2010), Lacey Nymeyer (2009), Whitney Myers (2007) and Tanya Jones (1994). All four were student-athletes at the University of Arizona.

A standout in-and-out of the pool for Stanford women’s swimming and diving, Forde (Louisville, Ky.) recently completed a master’s degree in epidemiology with a 4.2 grade-point average after receiving an undergraduate degree in human biology with a 3.96 GPA in 2021.

During her five seasons competing on The Farm, Forde helped the Cardinal to a pair of NCAA Championships (2018, 2019) and four Pac-12 Championships (2018-20, 2022). She claimed five NCAA individual or relay national titles – part of being a 19-time NCAA All-American – as well as six Pac-12 individual or relay titles; prior to her fifth and final season, Forde captured a silver medal in the 800 free relay at the 2020 Tokyo Olympic Games.

Her leadership and service activities included serving as co-president of the Stanford Student-Athlete Sustainability Committee and member of the Pac-12 Sustainability Committee during which she spearheaded a Zero Waste initiative at a Stanford football game with recycling, e-waste, and donation drives that were duplicated during basketball season. Forde, who received Stanford University’s James W. Lyons Award for Service, which highlights outstanding contributions in areas of extraordinary need that result in substantial change, will join the Peace Corps this fall to be a public health officer in rural Peru.

Nordin (Carmel, Ind.) was recently named ASU’s female recipient of the Pac-12 Tom Hansen Medal following her illustrious career with the Sun Devils’ women’s swimming and diving program. Nordin departed the program with school records in four freestyle events – 200-, 500-, 1,000- and 1,650-meter. She was Pac-12 titlist in the 500 free in 2020 and represented ASU in both the 2019 and 2022 NCAA Championships.

• More on each honoree

The rest of the swimming and diving nominees:

Savannah Brennan is a three-time College Swimming and Diving Coaches of America All-American, earning first-team honors for the 1000-yard freestyle and second team for the 400 individual medley and 500 free in 2022. Brennan was a four-time Florida Tech Female Swimmer of the Year and holds 10 school records, including one she set with her fifth-place finish in the 1000 free. She was named the 2021-22 Florida Tech Female Athlete of the Year. A two-time College Sports Communicators Academic All-American, Brennan was named to the first team in 2022 following third-team honors in 2021. She was the Sunshine State Scholar-Athlete of the Year for three consecutive years. On campus, Brennan was a four-year team captain and a four-year member of the TriBeta biological honors society, serving as chapter president. She also served as secretary for the Florida Tech chapter of the American Society of Biochemistry and Molecular Biology. In 2020, Brennan volunteered in the emergency department of Health First Holmes Regional Medical Center to provide support during the COVID-19 pandemic. She was a two-year volunteer with Team IMPACT, which matches children facing chronic illnesses with collegiate sport teams.

Ellen Gilbert was a five-time College Swimming and Diving Coaches Association of America All-American, earning first-team honors in 2022 for her sixth-place finish at the 2022 NCAA Division III Women’s Swimming and Diving Championships. The 2022 and 2020 CCIW Swimmer of the Year and CCIW Championship Meet MVP was an eight-time CCIW individual champion and two-time CCIW Cup champion, recording wins in the 100- and 200-yard butterfly and the 500 freestyle. Gilbert was the Illinois Wesleyan Female Athlete of the Year in 2022 and the team’s MVP for four years. The summa cum laude graduate received three College Sports Communicators Academic All-America At-Large honors, including first team in 2022 and 2021 and third team in 2020. She was inducted into the Psi Chi and Phi Kappa Phi national honor societies in 2021. On campus, Gilbert served on the Student-Athlete Advisory Committee and was co-president of the Rehabilitation Therapy Club and vice president of the Circle K International club. She also volunteered as a tutor for Teaching Buddies, a nonprofit created to help low-income Chicago students with pandemic-induced learning difficulties.

Macy Klein was a 10-time College Swimming and Diving Coaches Association of America All-American, recording eight first-team honors and two second-team honors. She helped lead her team to 2020 and 2022 MIAC championships and a 10th-place finish in the 2022 NCAA Division III Swimming and Diving Championships. An 18-time MIAC all-conference honoree and 12-time MIAC champion, Klein holds six records at St. Catherine. She was selected as a 2020 College Sports Communicators Academic All-America At-Large third-team honoree and was the 2020 MIAC Elite 22 recipient for the highest cumulative grade-point average at the conference championships. She was inducted into Phi Beta Kappa in 2022 and was a member of Chi Alpha Sigma, a national honor society that recognizes student-athletes for their success in athletics and the classroom. A member of St. Catherine’s Air Force Reserve Officer Training Corps since 2018, Klein became the Minnesota Detachment 410 Cadet Wing vice commander and professional development officer in 2021. Klein received the 2022 Air Force ROTC Distinguished Graduate Award, given to the top 10% of graduates nationally, and was selected for a 10-year service commitment as a pilot and commissioned officer in the U.S. Air Force.

Kayla Tennant was a three-time individual national champion, winning the 400-yard freestyle relay in 2022 and the 200 and 400 medley relays in 2021. She led her team to three national championships and earned 11 Coaches Swimming and Diving Coaches Association of America All-America honors, including seven first-team recognitions. The 18-time All-Bluegrass Mountain Conference honoree won six individual conference titles, helping her team claim four conference championships. Tennant holds the school record for the 100 butterfly. A summa cum laude graduate, she received two first-team College Sports Communicators Academic All-American At-Large recognitions. Tennant was a finalist for the 2022 NCAA Walter Byers Graduate Scholarship and a recipient of a 2022 NCAA Elite 90 Award, presented to the student-athlete with the highest grade-point average competing at an NCAA championship finals site. The 2022 Queens Outstanding Student in Biology and Outstanding Student in Psychology has published research on student-athletes’ social supports during the pandemic and the genome annotation of novel bacteriophages. Tennant was a team captain and served as secretary of Unified Royals, promoting inclusion for people with intellectual and developmental disabilities. As a volunteer, she assisted with care for children with developmental disabilities and behavioral disorders, patients in pediatric cardiac intensive care and adults in a medically underserved area needing specialty cardiac care.

Egg Freezing, Explained (And What To Consider About the Process)