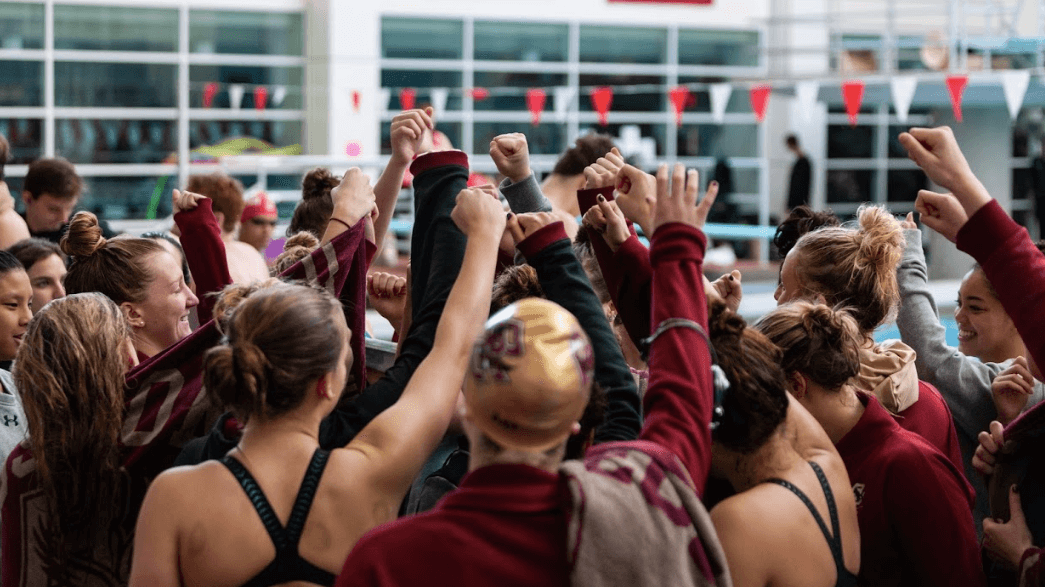 Megan Kramer set the tone from the beginning. She went 9:52.89 in the 1,000 freestyle, clipping nearly six seconds off her program record. She set the pool mark just shy of 24 seconds. Kramer would also win the 500 free, knocking 7.5 seconds off the pool record she had set in the fall of 2021.

Samantha Smith also set a BC program record in the 200 butterfly, her time of 2:00.80 eclipsing the championship-season time of Victoria Lin from 2020. Smith was also second in the 200 backstroke, a time that would’ve been a pool record if not for teammate Adair Sand.

Julienne Saliou set the other Boston College women’s swimming record by going 2:04.73 to chip .05 off the 200 individual medley mark. Olivia Poulin scored 302.40 on 1-meter diving to improve her pool record. She also won 1-meter diving. Sielicki won the 100 fly and 100 back, and Zinis captured the 50 free.

The Boston College men’s team re-set both relay records. The 200 medley was so fast that the first three finishers – BC’s A and B teams, plus BU’s A team – were under the mark set in 2019 by Duke. The record, though, belongs to the A squad of Michael Horkan, Christian Perez-Mari, Matthew Szekely and Darien Betances.

Bryce Henkel, Szekely, Charlie Clark and Andres Wong capped the day by going 3:02.23 to set the pool mark in the 400 free. BU’s A relay was under that mark, too. (Justin Lee and Ethan Thomas swam on both for the Terriers.)

Jack Doyle set the pool mark in the 200 IM by going 1:49.02, nearly two seconds quicker than the existing mark. Zach Szmania chipped about the same margin off the 1,000 free record with his 9:17.83. Szamania also won the 500 free, and Szekely swept the sprint events.

Thomas won the 100 free for BU, Sarsen Whatmore rallied to win the 200 free and Lee was second in the 50.

The Best 4 Proteins You Should be Eating, But Probably Aren’t